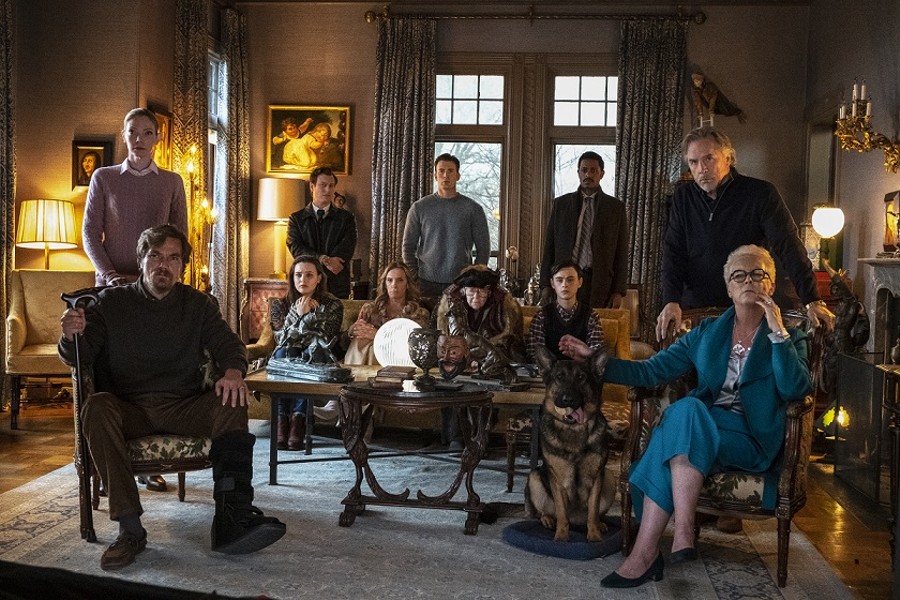 PHOTO COURTESY LIONSGATE The cast of "Knives Out."

Even though I wasn't wild about Kenneth Branagh's rather stodgy 2017 adaptation of Agatha Christie's "Murder on the Orient Express," I couldn't help hoping its box office success would reinvigorate that most beloved of genres: the good old-fashioned murder-mystery. Alas, that wasn't meant to be, and though we are getting another Hercule Poirot escapade from Branagh, as a whole the genre has remained mostly dormant.

Before "Death on the Nile" is released late next year, I hope its makers take a lesson or two from Rian Johnson's fun, ingeniously witty "Knives Out," which not only puts a modern twist on the classic whodunit, but is also one of the most purely entertaining movies to come around all year.

You already know the basics: a rogue's gallery of shifty individuals have gathered together in a spooky old house, where someone suddenly turns up dead. Everyone had a motive, and it's up to an intrepid detective to find the culprit.

In "Knives Out," that individual is master sleuth Benoit Blanc (Daniel Craig, sporting a Southern drawl and clearly relishing the part), a private investigator hired by an anonymous benefactor to dig into the death of wealthy patriarch Harlan Thrombey (Christopher Plummer). A renowned crime novelist, Harlan is found dead shortly after his 85th birthday celebration, his throat slit in what the authorities have ruled to be a suicide.

Blanc is aided in his efforts by the police lieutenant (LaKeith Stanfield) in charge of the investigation, and the lieutenant's second-in-command (Noah Segan), an enthusiastic fan of Thrombey's novels, who can't contain his excitement over all the mysterious goings-on.

Then there's Marta (Ana de Armas), Harlan's sweet-natured Latin American caretaker. She provided Harlan with some much-needed companionship in addition to medical care, and as a result heard the dirt on all the family members from Harlan. She's also cursed with an unfortunate inability to tell a lie without immediately becoming physically ill, a useful tool in getting to the bottom of who among that motley Thrombey clan can be trusted.

The Thrombeys like to claim Marta as a beloved part of the family, though while none of them will admit it aloud, they seem to know that she was closest to Harlan and resent her for it. In a running gag throughout the movie, not one of them can even be bothered to remember which South American country she immigrated from.

Writer-director Johnson has fun paying homage to classic works from the murder-mystery genre, from Agatha Christie and John Dickson Carr to "Murder She Wrote." While the film is consistently funny, it never tips over into spoof, and Johnson is obviously well-versed in the genre and takes it very seriously. As with many murder mystery plots, this one's not really meant to be solvable even by the most observant of viewers (though it always plays fair), so you're free to just go along for the ride.

Johnson is also a master of combining character, story, and whip-smart dialogue in a cleverly-constructed puzzle box plot that should delight mystery buffs. The narrative sometimes zigs when you expect it zag; we learn fairly early on who actually dunnit, but there are plenty more twists and surprises in store.

Like most of Johnson's films, "Knives Out" is even better on rewatch, and having had the opportunity to view the film a second time, I was able to better appreciate the way all the pieces fall into place. Even seemingly throwaway gags later prove to be of vital importance.

The entire ensemble — which also includes a rare cameo from Frank Oz, because in case you've forgotten, Johnson made a (pretty fantastic) "Star Wars" film not too long ago — is clearly having the time of their lives.

David Crank's intricate production design turns Thrombey's enormous mansion into a Gothic wonderland, filled to the brim with decorative weapons and the occasional secret passageway. The rich fall palette of Steve Yedlin's cinematography casts the film in shades of brown and umber. And I deeply covet the cast's wardrobe (especially Evans') which has them costumed in cozy layers and knitted sweaters.

The film remains a blast while sneaking in a bit of political commentary, as themes of class, wealth, and privilege bubble up to the surface along with plenty of digs at the general uselessness of the one-percent. It isn't subtle, but hey, sometimes subtlety is overrated.

With a terrifically game cast and Johnson's smart, funny script, "Knives Out" is a wickedly fun and immensely satisfying entertainment. I'm keeping my fingers crossed that we'll get to see the return of detective Benoit Blanc in a brand-new caper. And soon.