The Fox Sisters, Greg Townson, and love in the time of coronavirus

May 13, 2020
If there is something positive to come out of this coronavirus pandemic, Greg Townson says, it may be in something once uttered by one of the minds behind Monty Python.

“Believe it or not,” Townson says, “I think it was John Cleese who said, ‘In order to be creative, you have to have at least three hours of uninterrupted time that you’re devoting to your project.’ ”

In the infamous words of Monty Python, "Nobody expects the Spanish Inquisition." But Townson's new album, "Just Name It," involved considerably more than three hours of uninterrupted effort from a self-described workaholic who puts in 10-hour days working on his music.

“As an empathetic person, you’re seeing all this sadness, and my heart goes out to everyone,” Townson says. However, with all of this unplanned downtime, “I get more immersed in my work.”

Otherwise, the negatives are taking a toll on the arts scene. The Fox Sisters had planned on an album release party in June at Lux Lounge. But the coronavirus pandemic shut that down, and the vinyl — of course, this has to be vinyl — is stuck at the plant. So like Townson’s album, The Fox Sisters’ "Bust Out!" is an internet release.

“When the time comes, we’ll have a record release party,” Fox Sisters bassist Jimmy Filingeri says. “When we’re allowed to play in front of people again.”

Romance is what’s happening on these two albums. “Love in the Time of Coronavirus,” as novelist Gabriel García Márquez might put it. The Fox Sisters and Townson just happen to come at the subject from different angles.

Going for a drive with The Fox Sisters

The Fox Sisters always find the proper accessory to dirty up the rock-and-soul garage. The Rochester band is not reinventing the wheel, but it’s changed a couple of the whitewalls, and now the thing runs great on six cylinders. 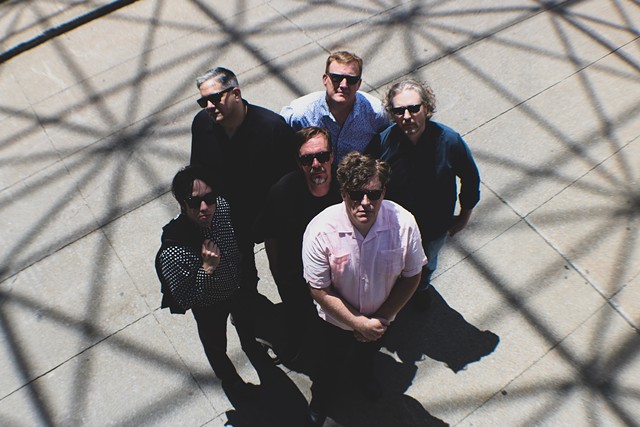 All of the members are veterans of the Rochester scene, a part of the seven-year evolution of The Fox Sisters. Filingeri and lead singer Pat McNally are the originals; their history together goes back to The Thundergods, a staple of the Bug Jar scene more than a decade ago.

The Fox Sisters’ "Bust Out!" is raw and party-rocking, perfect for an afternoon on the deck, waving at the neighbors from a safe distance while waiting for the pandemic to pass. Filingeri suggests influences such as Bobby Comstock, John Fred and His Playboy Band, and the Rochester-raised teen idol Steve Alaimo. In its publicity material, The Fox Sisters also liken the sound to Eric Burdon & The Animals, and that seems to hit the squirrel right on the nose.

“White guys heavily influenced by James Brown and R&B music,” Filingeri says. “And Mitch Ryder and the Detroit Wheels I’d say is a big one.”

Yeah, there is that matter of "Bust Out!" and a 1966 Mitch Ryder and the Detroit Wheels album called "Breakout…!!!"

“That wasn’t on purpose, but it works,” Filingeri admits.

Somewhat innocently, the band attributes the origin of the phrase “bust out” to former New York Mets outfielder Mookie Wilson. (The actual story is more complex than we have time for; just Google Mookie Wilson and dinosaurs.)

Like Mitch Ryder, Filingeri says The Fox Sisters take aim at ’60s-style rhythm and blues music “without being slaves to the form of that sound, of that time….”

“Primarily because we’re white, and that music was made by African-Americans… It’d be foolish to try and sound like Sam Cooke and his band.”

They’re more rock and roll. Bushen’s organ often dominates, and a Shafer drum solo here and there arrives at just the right moments. The wizardly Marshall seems to enjoy the opportunity to play unrestrained guitar, finding plenty of space between Bradley’s sax and McNally’s vocals.

“Our influences are retro,” Filingeri says, “but we just sound like the people we are.”

If "Bust Out!" is a statement, the prison that The Fox Sisters are fleeing is love, and its entanglements. They’re doing it with attitude. “You look like a page from a fashion magazine, but can’t you see you’re not for me, Valerie,” McNally sings on “Valerie.” The classic ’60s theme of teen angst gets The Fox Sisters treatment in “Your Search is Over.”

And there’s “The Song I Sing,” where love is “written in a book of a thousand pages in another language you never read,” before the music spirals to the clouds.

These songs are short and blunt. The Fox Sisters don’t linger over love’s tragedies for too long. “Suffer Fool” is positively epic at three minutes and 38 seconds. But that one has to take its time. It’s a smoky-cocktail, garage-jazz warning: “I got news for you kid, she don’t suffer fools.” And “So Damn Mean” is laid over a similar groove, “’Cause I love her so much, even though she’s rather common, and rude.”

So The Fox Sisters are 1960s garage-soul acolytes, and it’s a cluttered garage at that. “Orangutan in King” veers dangerously close to the novelty records of the day. “Listen to Your Sisters” dispenses sound advice from that era with a chorus of, “Hey, hey, hey, hey, ha, ha, ha, ha (repeat).”

Historically, as we know in western New York, The Fox Sisters were our regional spiritualist charlatans. But these Fox Sisters aren’t faking it. It’s a rock band that understands how to write a love ode to a car. No song here more defines what The Fox Sisters are up to than “Windows Down,” opening with a Stonesian “who-hoo,” and an admonition to “turn the radio on, crank up the sound.”

Greg Townson was touring Australia in January, playing guitar with Nick Lowe and the rockers Los Straitjackets, whose schtick is performing while wearing Mexican wrestling masks. And he saw that people in the audiences and walking the streets were wearing masks as well, but not in tribute to Los Straitjackets: coronavirus had arrived.

When Townson returned to Rochester, he submerged himself in self-isolation. Then, with 14 or 15 songs ready to record, he called on Todd Bradley, his longtime partner in the Rochester band The Hi-Risers, to play bass and drums. They recorded one song. Then Bradley got sick. It wasn’t coronavirus, although there was concern that it was. “From then on, I was on my own,” Townson says.

So here we are. Townson’s summer has been wiped out. There was to be yet another tour with Los Straitjackets and Lowe. Perhaps time for a few gigs here with The Hi-Risers. Or some solo shows. All gone.

Now he’s stuck at home in Rochester, alone. At least he has his third solo record, "Just Name It," to show for it.

“Interacting with people online is really the only thing I’ll probably be able to do, with performing off the table,” Townson says.

“Not the most original title in the world,” Townson says. “But it’s kind of an interesting record, because he’s playing everything himself there. And I just listened to that, to think about how it’s gonna be, where there isn’t this give and take between anybody else.”

Left to his own devices, Townson’s good-natured sensibility is present throughout the seven songs he’s included on "Just Name It." He turns to the cosmos in the search for good: “So when I give up hope, I get my telescope and you can always find a ray of hope in the sky.”

There is no needless drama in his love songs, proclaiming on the title track, “I’ll do what you want in the name of love.” Piano plays second fiddle to guitar as Townson advises, “If you’re not in love, you’re in trouble.”

“We Tied One On” is a classic got-drunk-and-got-married lament with the line, “It feels very strange when you come to, and it’s your honeymoon.”

And from the other side of the bed is “Square One,” and a cautionary message for the lovelorn with, “In the game of love, there’s a lot to learn, and if you’re not careful, you could lose your turn.”

Although it's a song about lost love, moments in Townson's "100 Ways to Play Solitaire" can even be applied to coronavirus isolation: "People going out, I'm staying in, with a book of rules and a bottle of gin."

But in general, as the album’s closing song notes, “It’s Good To Be Alive.” These musicians without an audience persevere. Townson has purchased a webcam, and plans to soon begin playing online. “I’ve never performed to a wall before,” he admits. “I mean, I’ve had some shows where nobody showed up, but that’s a different story.”

"Just Name It" is found, at least for now, only on the online music company Bandcamp. “It’s a different way for putting out music, that’s for sure,” Townson says. “I’ve never put it out just online before.”

It’s a concession that, on society’s food chain, entertainment and big crowds will likely be among the last to emerge from the coronavirus pandemic. It’s tough for a band to socially distance onstage, but one musician and a guitar might squeeze in.
“Ironically, my solo thing will be the first thing I do,” Townson says.

“Musicians are resourceful people. If you’re going to do this, you have to figure out how to survive.”