The font of consummation 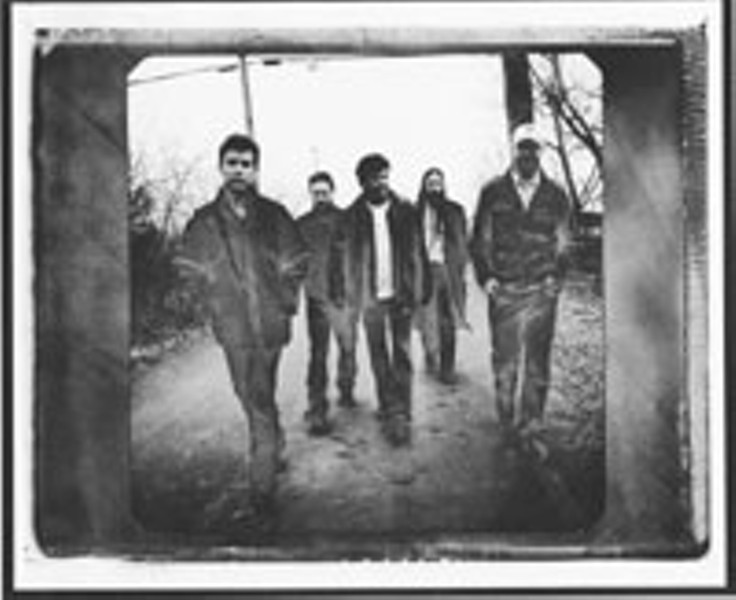 The Tragically Hip is getting back to its roots. The band's eleventh album, In Between Evolution, hearkens back to the quality and sound of earlier records, before the generally panned Music @ Work and In Violet Light of recent years.

It may have seemed that the quintet was running dry after 20 years of writing rock 'n' roll. But instead of receding into the nooks and crannies of its native Canada, The Hip tapped into the source: the live show.

"Our idea this time around was to take it a bit more to the way it was the first two records," says Hip guitarist Robby Baker during a stop in Syracuse. "You have your songs and you tour the shit out of them, so they're so road-ready and by the time you get them in the studio it's just a matter of setting up and playing them."

This time around, instead of recording separate tracks in the studio and using drum loops and samples, the band perfected the entire album on stage --- sometimes wandering into small clubs to test-drive songs --- and then played all together in the studio. They chose producer Adam Kasper (Pearl Jam, Queens of the Stone Age) because of his desire to capture the in-person feel. What they got was a snapshot of the band's direct, honest, and edge-rubbing live show.

"The strange thing is it's the approach that most bands take for their first record or first two records," Baker says, "and I think that's why those first two records by a band are usually their best. And then you get to a point where it gets all ass-backwards, and you're making the song and then you're going out and touring it."

The band feeds on interaction with its audience as much as the fans love seeing the live shows. Instead of feeling beat down by the road, the band thrives on tour.

"I've used the analogy that the whole process is really like a big, long flirtation, going out to dinner and drinks. Getting up on stage is consummation. That's where it's all headed."

In Between Evolution is a rare thing: an album on which every song can stand on its own. The melodies are strong and addictive, Gordon Downie's lyrics are genius, the guitars (Baker and Paul Langlois; Gord Sinclair on bass) and drums (Johnny Fay) pull you gently along or slap you around, as needed. The effect is classic, back-to-basics. The songs are short and pithy, but flow from one to the other with a sort of rambling elegance. There are ballads ("Good Night Josephine") and rough, agitated singles ("Vaccination Scar," on which Baker plays pedal-steel guitar). This is good rock 'n' roll. It will last.

The Hip has an educated, shabby cool --- a sort of musical equivalent of the smart, going-places kid who still remembers the old neighborhood. They write songs about the extraordinary in ordinary lives, with a keen eye, and a touch that goes from jaded to sarcastic to gentle. They've put out 11 albums, been together 20 years.

"I think for a lot of years, you'd try to disguise the fact that you're from Canada, you didn't celebrate it," Baker says. "We're a Canadian band that decided to stay in Canada and sing about Canadian stories... So some people got a little overexcited about that, maybe."

Baker says he's glad to return to Western New York, and he's interested in the venue the band will play when it gets here, the fact that it's not a big arena, but an old theater.

"We always refer to them as sort of like 50-year-old strippers," he says. "It's all that sort of red, velveteen wallpaper, all nicotine-stained, and a little peeling around the edges, but it's just got so much character. It's history."

It could be a character from one of their songs. And it reveals an eye for what's underneath, the gracious possibility in the old, the steady, the classic.