The shows you need to watch 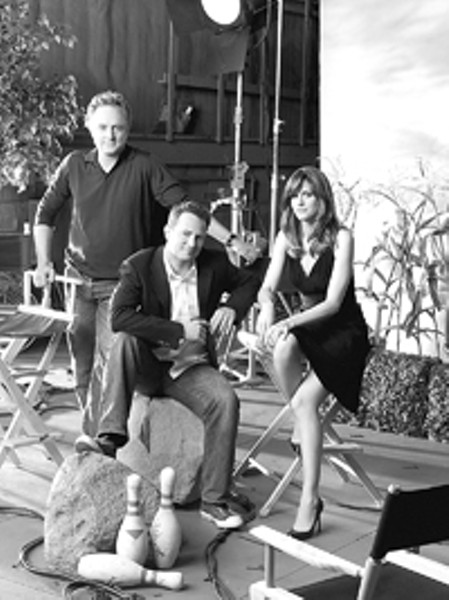 With the changing of the leaves comes a fresh batch of television shows just desperate for your attention. Over the past few months we discovered whether America has talent and who, if anyone, really can dance. Now we're on to much more compelling fare --- new dramas that explore the end of the world from the perspective of a small Midwestern town, or what happens when everyday people suddenly discover they have superhuman abilities. A new comedy extrapolated from a popular Spanish telenovela about a homely young woman and her dreams of breaking into the fashion world. And two new shows based on the behind-the-scenes goings-on at Saturday Night Live.

There are nearly 30 new shows hitting the networks this fall. While we can't go over them all here, below are 10 of the most interesting new offerings. Since TV viewers seem to prefer the pabulum of, say, Two and a Half Men to the giddy sophistication of Arrested Development, don't be surprised if a few of them get the axe. But give these newbies a shot; you might be pleasantly surprised by what TV has to offer this year.

After spending last year in the ratings toilet, NBC desperately needs a buzz-generating hit. The network suits have anointed this new dramedy from Aaron Sorkin, the man who brought you Sports Night and The West Wing, as their most likely candidate. Easy to see why. It's got a great premise, as it follows the behind-the-scenes turmoil at a Saturday Night Live-style sketch comedy show. It's got a great cast, led by Friends' Matthew Perry, West Wing's Bradley Whitford, and movie starlet Amanda Peet. And the pilot, available weeks early through Netflix, has people cheering. Now if only the real SNL didn't suck so much...

It's the end of the world as we know it, and Skeet Ulrich most certainly does not feel fine. The Scream alum and onetime Tiger Beat fixture gets another shot at fame with this gripping drama about a small Midwestern town that watches in horror as a mushroom cloud appears on the horizon. As the panic grows, the questions swirl: Was it an attack? An accident? Are they the only people left in the country? Are they next? The good news is that Major Dad is here to kick some ass, as the always-welcome Gerald McRaney has a spot on the cast.

This one could go either way, but I really admire the concept. Salma Hayek exec produces this translation of a popular Spanish-language telenovela (basically a nighttime soap opera) about an aesthetically challenged but bright young woman trying to break into the cutthroat world of fashion. America Ferrera from The Sisterhood of the Traveling Pants stars as sweet, plain Betty, and she could be the breakout star of the season. Vanessa Williams expertly chews scenery as a demanding fashionista, and the preview offers some catty fun.

Definitely taking a page from Lost (everyday folks hurled into a fantastical, unpredictable scenario), this show follows a handful of people who suddenly discover they have super powers. One man can stop time, one can fly, another can hear people's thoughts, and a teenaged girl is seemingly indestructible. Comics have been doing this stuff for years, of course, but the subtext is what's interesting: when the world is going to pot, the planet fights to save itself by choosing a set of protectors. Could end up being really hokey, but it's off to a good start.

The CW is a new network formed by smooshing together failed netlets UPN and WB. Runaway is one of its two new series and features ex-New Kid on the Block Donnie Wahlberg and Leslie Hope (the doomed wife from the first season of 24) as a married couple living under assumed identities while on the lam after the cops wrongly accuse Wahlberg's character of a murder he didn't commit. Now they have to keep a low profile and avoid slipping up as the cops close in --- and so does the real killer.

This one gets a pass based on cast alone. CalistaFlockhart (Ally McBeal), Rachel Griffiths (Six Feet Under), and Sally Field (no introduction necessary) headline a drama about, well, brothers and sisters who reunite as grown-ups to deal with a family emergency. The pilot episode was completely re-shot and the current version is much more palatable. But I'm still hesitant, because with a premise like that it's a short drive to Treaclyville via the Melodrama Expressway. And nobody wants to go there.

The last few years have been rough for the sitcom. Dramas and reality shows have almost completely consumed the network schedules, and most of the attempts at funny business have landed with a thud (notable exceptions include The Office, My Name is Earl, and How I Met Your Mother). Fox tries to breathe some life into the ailing genre with this show featuring reliable supporting players Brad Garrett (Everybody Loves Raymond) and Joely Fisher (Ellen, Desperate Housewives) as a jaded, long-married couple who spar with their bubbly newlywed neighbors. Garrett and Fisher certainly sell it, but one has to wonder how long the premise can sustain itself.

Speaking of small-screen career renaissances, Ray Liotta clings to what's left of his marginal fame by signing on to star in this drama about a professional thief looking to retire from "the business." Unfortunately, Ray Liotta is no Alec Baldwin. While he's certainly good at minor character-actor roles, he cannot carry a movie or show by himself. The producers apparently realized this and stacked this deck with an astounding supporting cast featuring Oscar nominee Virginia Madsen (Sideways), Simon Baker (The Devil Wears Prada) and Amy Smart (The Butterfly Effect).

John Lithgow (3rd Rock from the Sun) and Jeffrey Tambor (Arrested Development) star as two older gents who vow to make the most of their two decades left on the planet. Given the hams at the helm, don't expect a lot of subtlety.