'The Disaster Artist' screenwriters give a word to the Wiseau

If you're a connoisseur of "so bad it's good" cinema, you've likely heard of "The Room," a bizarro 2003 indie widely considered to be one of the worst movies ever made. It tells the supposedly heart-tugging story of Johnny (played by the film's writer-director-producer Tommy Wiseau), a successful, All-American guy whose happy life collapses when his beloved girlfriend cheats on him with his best friend (Greg Sestero). Except Wiseau doesn't appear to have the first clue of how actual human beings behave, so what he comes up with is a masterpiece of unintentional comedy. Cue a frenzied cult following and raucous midnight screenings all across the country.

Now comes "The Disaster Artist," a film adaptation of the autobiographical book by Sestero, which chronicles his unlikely friendship with Wiseau, his experiences making "The Room," and watching it grow into an infamous classic of crap cinema. Directed by James Franco (who also delivers a terrific performance as Wiseau), "The Disaster Artist" is a hilarious and surprisingly moving tribute to the power of friendship and the creative drive.

CITY spoke by phone with screenwriters Scott Neustadter and Michael H. Weber ("The Fault in Our Stars," "(500) Days of Summer"), who recently earned awards for Best Screenplay from the National Board of Review and the Hollywood Film Awards. They talked about adapting such a strange tale, the mysterious origins of Tommy Wiseau, and why audiences all over the world have connected with his story.

CITY: How did you both come to be involved with "The Disaster Artist"?

Scott Neustadter: We were sent the book from Seth Rogen and his producing partners. They said to us "this is something that James Franco and his brother Dave were looking to do." We didn't know anything about the book. We didn't know anything about "The Room." We kind of went in totally blind, and I started reading the book and I totally flipped for it.

But then I was like, "OK I'm going to stop reading this book and I'm going to watch whatever this movie is they're talking about." And I watched it in the worst possible way, which is alone in my room on my computer. But obviously it struck a chord, and by the time we were finished reading the book, we were like "we have to get involved somehow."

Michael H. Weber: I'd heard of "The Room," but I'd never seen it. I started reading the book and fell in love with it as well. Scott and I made a calculated decision together — without telling James Franco or Seth Rogen — that I would hold off from watching "The Room." In fact, I waited until after we finished the first draft to watch it, because the goal was a movie that wasn't just fanservice to that small subsection of movie fans who loved "The Room." It had to play to the vast majority of people who go to the movies but have never even heard of "The Room."

So by holding off watching "The Room," ideally we were making a film that could play to everyone, which was always the intention. Because for us, it was less about production hijinks or the inside baseball of making movies, and more about the friendship between these two guys, and what bonded them in the first place, and how that friendship was strained during the making of this piece of art of questionable quality.

This is the first time either of you have worked from a real-life story. How does that change your writing process compared to a story that's just straight-up fiction?

Weber: We like adaptations. There are confines to them, where you can't stray too far. And with a true story, it felt like we were using a similar muscle. It was pretty cool that in a couple instances (...) Greg Sestero pointed out a few times we thought we'd made up lines for Tommy, they turned out to actually be things Tommy said. Which is both a compliment and then also a little bit scary that we were so in that guy's head that things we were inventing turned out to be real. 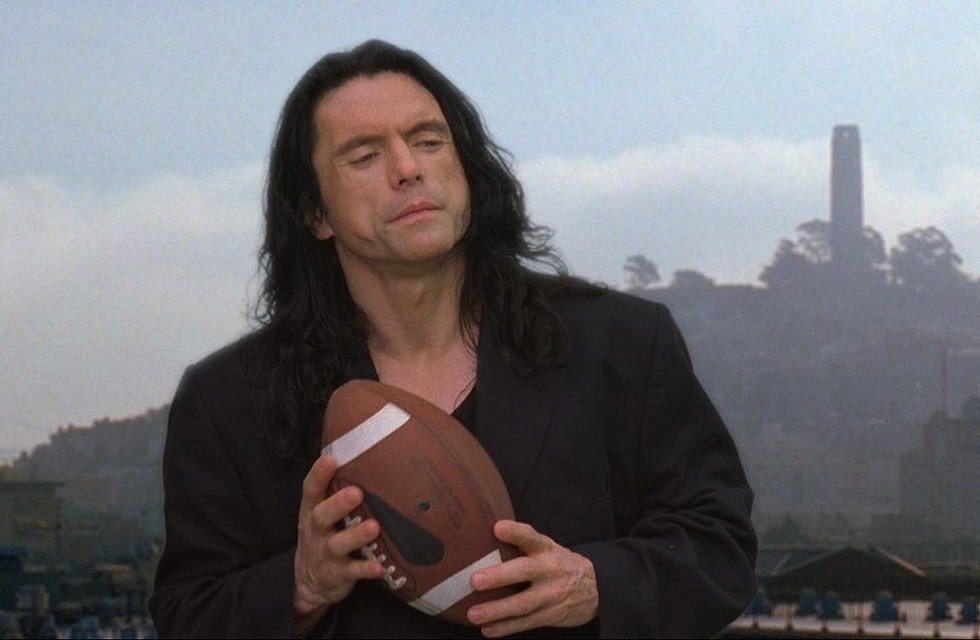 One of the things that defines Tommy is how much of his background remains shrouded in mystery. At any point in the process did either of you attempt to get any answers from him, or did you just not even try?

Neustadter: I think we made a conscious choice early on that to demystify Tommy would have negative consequences on the enjoyment of fans of the project. And it seemed like the kind of thing where it's far more interesting that he wants this mystery to exist than it would be to give you a number of like, the day he was born. Or he's from this place. Isn't it more interesting that he worked so hard to create this aura of mystery around him? I think that's the kind of thing we wanted to preserve.

Weber: And the fact is Greg doesn't ask those questions either until late in our story. Where he's trying to figure out "is this guy really my friend or not? Would my friend do this to me?" So those questions really serve the best purpose at the moment the friendship is fracturing.

Neustadter: I will say we have no idea where that money comes from. We have zero idea.

Someday that will come out.

Neustadter: Yeah, I feel like — I don't know — there will be dead bodies.

Weber: No, there won't be dead bodies.

Neustadter: But if information comes out about it, then something terrible could happen.

Weber: The guy's a genius, clearly. I mean, he did something to figure out a way — he's always marketing himself, "The Room," and his own mystery. He's sort of a genius in that way.

Weber: He got an emoji today. That's pretty cool.

Neustadter: A trademarked emoji, which is even funnier.

One of the reasons the movie works so well is the way it both finds humor in Tommy, but also treats him with a lot of affection. How did you go about finding the right tone? How conscious were you of not coming across as mean-spirited at any point?

Neustadter: I think we were never derisive about it. I think we kind of related to these guys. We were people who wanted to be in the film business and wanted to write movies. That was our dream and we shared it. That's how our friendship started, and we related to this sort of sheer stick-to-itiveness that they had. And it doesn't really matter whether the thing they made wins Oscars or makes a lot of money. They made this extraordinary thing that people are still talking about 15 years later. And so that's the approach we had to it. I mean we're envious of what they've made. [Laughs]

Tommy does make an appearance in the movie. In a way. Can you talk about how that came about?

He negotiated his own hair and makeup approval, his own wardrobe approval, and got to name his own character. That's sort of the bones of how we got to what was going to be part of that earlier party scene with Jerrod Carmichael. But we ultimately decided it took you out of the movie a little bit, and it was more fun to put as — not even really an Easter egg, but a final little bonus for the hardcore "Room" fans at the very end.

Neustadter: There's no Hollywood party that's going to have two guys like that at it. So you knew you were going to be in fantasyland if we started to drop that the middle of this thing.

Weber: But it was fun. It was fun to have him on set. That was the only day he was on set, and it was fun to watch him and Franco riff. They were both doing the voice, it was crazy. We compared it to — that day must have been like the day on "Being John Malkovich" when Malkovich goes inside Malkovich. It was just so weird to be sort of inside Tommy's head inside Tommy's head.]

What was his reaction when he found out that it wasn't going to be in the actual film?

Weber: I don't know what his reaction was initially, because by the time he saw a cut, it might have already been there after the credits. I know when he showed up on set we had scripted maybe three or four lines for him and Franco to just sort of riff back and forth, and his first comment was, "That's all there is?" So he definitely wanted a more substantial scene to do opposite Franco.

Since you first premiered, the film has become part of the award season conversation in a big way.

Weber: Totally by design. Just how we intended.

That's kind of my question. How has that experience been for you? Has there been a shift in the way the movie is being talked about as the press tour has gone on?

Michael: I don't know. You know, we don't set out to write movies so they'll be in the awards conversation, honestly.

Neustadter: I do. [Laughs] I set out to write Academy Award-winning scripts every time.

Weber: I feel like we set out to write movies we'd want to go see. And we're always talking about how there's never enough movies that we actually want to see. At the end of the day we're fans first. So the fact that people are responding so favorably is amazing and we'll take it every time. And honestly we're just so happy for Franco. Because he really put this film on his back and carried it to this place.]

What is it that strikes a chord with people about "The Room" and Tommy himself, and now this film?

Weber: You know, the movie's about friendship ultimately. Which I think is something everyone can relate to. The movie's also about having big dreams and going after your dreams even when the world tells you no. So I think that we're attempting to tackle some big, relatable stuff in telling Tommy and Greg's story.

So yesterday [the film's distributor] A24 tweeted out a photo showing that the film is playing at a theater in New York City in 4DX, with, like, rumble seats and environmental effects and everything. When you were sitting down to write "The Disaster Artist," did you ever imagine you were writing the type of movie people would eventually experience with vibrating seats?

Neustadter: Oh my God, no.

Weber: It's also in the dome in L.A. at the big ArcLighttheater. It's playing where "Star Wars" is gonna play, where all the big CGI movies go. So that's pretty cool.

Neustadter: But this 4DX seems like it's the cutting edge of moviegoing right now. So in a way it's rather fitting that it's for a movie about Tommy, considering he was the first person to shoot on digital and on HD and film at the same time, when no one was doing that.

Weber: Maybe he made his money by inventing that 4DX format. You don't know, anything's possible.

"The Disaster Artist" opens in Rochester this Friday.