The dirty fight for farmland in Latin America

Even though much of the world's food supply still comes from small farmers, those same farmers from Honduras to the Philippines increasingly cannot feed their own families, and they're fighting for survival. A wave of "land-grabbing" has swept across continents over the last 30 years — a phenomenon cited in a 2014 report by the nonprofit GRAIN.

The systematic squeeze on small farmers, the report says, is concentrating land in the hands of fewer and fewer people globally. The result is a breakdown in societies and ever-wider disparities in income, resources, and power. 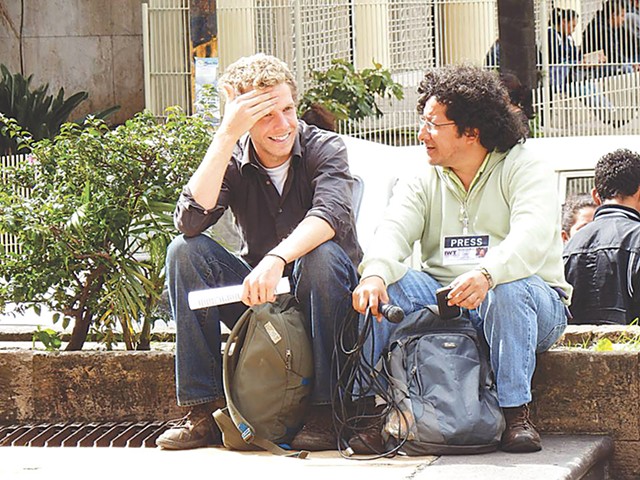 Video journalist Jesse Freeston, in his first feature-length documentary, captured the crisis as it unfolded in Honduras over much of the last decade.

"Resistencia: the Fight for the Aguan Valley" is a brutally honest take on how US foreign policy aids and protects the interests of the wealthy, politically connected, and corporate investors — in this case, big agriculture and food production — while the basic needs of the most vulnerable are ignored.

Resistencia has been shown in some parts of Central America and at two film festivals in Canada. And Freeston will be in Rochester on Wednesday, October 7, for a 6:30 p.m. showing at the Little Theatre.

The film focuses on the plight of Honduran peasant farmers or "campesinos," many of whom have worked the soil of the Aguan Valley — often described as some of the richest in the world — for generations. But through a mix of colonialism, political upheaval, and conflicting laws, the farmers lost their land rights.

And when democratically-elected public officials sympathetic to the farmers are literally carted out of the country in the 2009 coup, the farmers take justice into their own hands and battle the country's richest and most powerful plantation owners to take back their land.

While the farmers are able to create sustainable agricultural co-ops by reclaiming small plots of land, Resistencia shows in graphic detail that the Movement of Unified Campesinos in Aguan comes with a terrible price. The region has been plagued by some of the worst violence in the hemisphere. Freeston doesn't shy away from showing a countryside gripped by terror of the Honduran police and the suffering inflicted on the farmers.

Freeston, a Canadian journalist who began working on the film about four years ago, has produced numerous investigative video pieces on economic, political, and social movements in North and Central America. He has also directed documentaries for teleSUR — the world's largest public Spanish-language broadcaster — and he has co-produced for Al Jazeera's "Fault Lines."

He says that there have been some print stories in English about the uprising, but little footage shown in English on US television news.

"I was the only video journalist at the time that was allowed to go and spend time with the farmers that had taken over the plantations," he says. "I definitely felt a commitment to them to tell their story."

Freeston says he hopes that Resistencia will make US viewers think about several issues.

More consumers recognize that paying lower prices on everything from coffee to bananas is too often the result of some form of worker exploitation, Freeston says. For instance, the farmers in the Aguan Valley toil in the heat and humidity for pay that is so low that they can't provide for their families.

"There are large groups of people who are very interested and concerned with how we produce and distribute food in the 21st century," he says. "I think those people gravitate toward the message of farmers being able to control the land they work on and allowing them to be the ones who get to justify the best use for the land instead of it exclusively being in the hands of the big corporate plantation model."

The film also has an anti-imperialism message, Freeston says. The political right in Honduras still subscribes to a "trickle down" economic model to justify support of wealthy landowners and foreign investment by big food corporations, he says.

"There are many ways to work the land of the Aguan Valley." Freeston says. "I don't buy the idea that only foreign capital can create jobs."

Freeston says it's time for the US to stop dictating the terms of governance in places such as Honduras.

"I think there are a lot of people [in the US and Canada] who are extremely concerned about our foreign policies," he says.

That's because some of those policies have led to dubious outcomes. For instance, the film references a WikiLeaks cable revealing that officials in Washington knew for years that one of the plantation owners was letting his fields be used as a landing strip for drug smugglers.

In one of the most powerful scenes in the film, Freeston talks to Blanca Espinoza, who is the first woman in the Aguan Valley to lead a land-reclamation effort. Espinoza has nine children and says that it isn't possible to support her family without being able to farm a small plot of land. Honduran police made the farmers strip naked and then destroyed the co-op's crop of corn and beans.

A defiant Espinoza says in the film, "I'm fighting so my kids never call me a coward who didn't even leave them a place to live." Clinging to her, however, is her oldest daughter who tearfully says she fears her mother will soon be taken away and killed.

"I think if you held a public referendum in Canada or the United States on whether they were on the side of Blanca or the plantation owners, I think it's pretty clear that support would go to Blanca," Freeston says.

Possibly the biggest concern the film raises is the impact that economic disparity and violence — Honduras has one of the highest per capita murder rates in the world — has on migration. There's a direct connection between the conditions in countries such as Honduras, Freeston says, and children ending up on the southern US border.

Espinoza's daughter shown in the film, ironically, was one of those children. After the girl disappeared for days, Freeston says, her mother began to presume the worst. But the girl was captured and returned by US officials, he says.

"It's really sad to see these kids sitting around waiting for the right moment when they are going to make this perilous trip to the US," Freeston says. "It's one of the saddest things I've seen."