Justice is a malleable term, but fundamentally and conceptually it is about fairness, both for people accused of crimes and people who are victims of them.

The Monroe County district attorney's race illustrates just how subjective justice is, as a concept and as a practice. The two candidates converge on some issues and diverge on others.

Republican Sandra Doorley, who is seeking her third term in the office, casts herself as a pragmatist, a prosecutor who's tough when a defendant presents a threat to the public and compassionate when her office encounters someone struggling with mental health problems or addiction.

Her Democratic opponent, Shani Curry Mitchell, is campaigning as a progressive reformer who wants the office to more broadly embrace diversion programs and incorporate approaches such as restorative justice.

The contest takes place at a time when public thinking around justice and the institutions tied to it — the legislatures that make laws and the police, prosecutors, and courts that enforce them — is drastically shifting. And we've seen evolving attitudes toward these institutions manifest in greater Rochester and New York state.

After decades of pressure from activists, City of Rochester officials recently made sincere efforts to overhaul the city's police accountability process, including the creation of an independent Police Accountability Board. The police union sued to stop the public referendum that would have put implementation of the board into the hands of voters, and a state judge has, for now, halted that vote.

New York lawmakers this year changed state law to eliminate the use of cash bail for many misdemeanor and non-violent felony charges. Those changes came after several years of pressure from grassroots activists, attorneys, and members of the Senate and Assembly. They all hammered on the point that too many people were spending days, weeks, and even months in jail, held on low amounts of bail that they simply couldn't afford.

Doorley and Curry Mitchell both say bail laws needed to be reformed. But while Curry Mitchell fully embraces the new laws, Doorley says they should have allowed for courts to consider public safety and a defendant's "dangerousness." When the laws take effect in January, courts will be allowed to set release conditions based only on the likelihood that defendants are a flight risk.

This year the state legislature also seriously considered legalizing marijuana for the first time. Much of the discussion centered on the disproportionate harm that cannabis prohibition has inflicted on communities of color. The effort stalled, though it is expected to surface again in the 2020 session.

Doorley says she won't prosecute anyone for possessing less than two ounces of marijuana unless the possession is tied to a more serious crime, such as driving under the influence. Curry Mitchell says she'd withdraw and dismiss any marijuana charges that are a misdemeanor or less, and she says Doorley should be doing the same.

At the federal level, Republicans and Democrats came together in both houses to support a criminal justice reform bill that President Donald Trump later signed. The law largely addresses prison sentences under federal laws.

The United States is becoming more progressive on issues of justice. That's not to say the system as it stands is enlightened or humane, but it has shifted in those directions. Those shifts are the backdrop of this year's district attorney's race, where the candidates exist not at the extremes, but on different parts of an evolving spectrum.

WXXI 2-way
CITY's News Editor Jeremy Moule discusses the DA race with WXXI's Veronica Volk.
Update Required To play the media you will need to either update your browser to a recent version or update your Flash plugin.

Former District Attorney Howard Relin hired Doorley in 1992 and she's worked in the Monroe County District Attorney's Office since. She's worked in most of its bureaus and handled every type of case that comes through the office, she says. And that experience matters when picking someone to lead an office of prosecutors that has a $15 million annual budget, she says.

The district attorney is the county's top law enforcement officer. In that role, Doorley — along with the assistant district attorneys who work for her — has a lot of discretion around how or whether to prosecute cases. She doesn't take a narrow view of what her office does.

"We solve problems," Doorley says. "We make the community a safer place."

In every case, attorneys weigh factors such as evidence, victims, witness cooperation, and whether the defendant is new to the criminal justice system or has addiction issues or a mental health disorder, Doorley says. The department won't pursue a case if it lacks evidence, she says. All the factors influence things such as the plea deals offered to defendants or whether a defendant is steered toward one of the county's several diversion courts.

The diversion courts have a growing role in the criminal justice system and they're an acknowledgement that many defendants are coping with addiction, mental health conditions, or other complicating issues.

The aim of these courts, Doorley says, is to change people's behavior so they stay out of the criminal justice system.

It's an idea she embraces, having helped establish a gun crimes diversion court. That court handles defendants who have been charged with illegally possessing a firearm, but not with using it in another crime, such as robbery or assault. Defendants "earn probation in lieu of a state prison sentence" through things such as employment programs and mental health or substance abuse treatment. Of the defendants who enter the gun crimes court, 67 percent complete the process, Doorley says.

"These are important steps," she says. "We're not just prosecuting people to see them put in jail. There are so many diversion programs and so many programs where we can help other people."

Doorley's office and local law enforcement recently launched another diversion program, this time outside of the court system. When police arrest people on non-violent felony or misdemeanor charges and they have an apparent mental health disorder, officers will take them to a clinic at Unity St. Mary's Campus instead of a jail. If the person "meaningfully engages in mental health treatment," then the District Attorney's Office won't charge them, Doorley says.

County courts and law enforcement have been taking a similar approach to the opioid epidemic. Defendants who have opioid addictions are routed to the Opioid Stabilization Court, which coordinates treatment. Any prosecution is suspended until the defendant is stabilized.

But Doorley has made a controversial distinction between people who possess and use opioids and people who sell the drugs. Doorley, working with local law enforcement, has pursued homicide charges against some dealers who sold opioids, particularly heroin and fentanyl, to someone who fatally overdosed on them. Doorley admits to having "no tolerance for drug dealers," but acknowledges that some people sell drugs to feed their own addictions.

Justice, she says, is "making sure that we get the right result for the community, for the victim, for the witnesses, for public safety, and for the defendants," Doorley says.

Curry Mitchell worked for almost seven years as a prosecutor in greater Atlanta and for more than five years as an assistant district attorney in Monroe County. 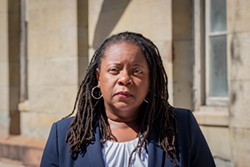 She's running as a progressive prosecutor — part of a national wave that's captured district attorney's offices in Missouri's St. Louis County, Philadelphia, Chicago, Boston, and the borough of Queens — and has received the backing of activist Shaun King and the attention of The Nation magazine.

Prosecutorial discretion is central to her philosophy. As she campaigns, Curry Mitchell talks about how she disagreed with Doorley administration policies that led to overcharging defendants and restricting assistant district attorneys' discretion in plea bargaining.

Curry Mitchell says she raised those concerns while she worked there, though she wouldn't discuss specific cases or instances. Doorley says she doesn't recall hearing any such concerns from Curry Mitchell and that she provides her assistant district attorneys with significant leeway to make plea offers.

Curry Mitchell sees prosecutorial discretion as a powerful tool to help get defendants, when appropriate, into services that address the underlying reasons for their offense. If those reasons are addressed, then it's much more likely the person won't reoffend, she says.

Prosecutors can decline to take cases to court, they can withdraw and dismiss charges filed against a person, and they can offer defendants what's known as an adjournment in contemplation of dismissal. That occurs when cases are adjourned and defendants are required to meet certain stipulations over a period of time — drug or mental health treatment, community service, restitution — in exchange for their cases eventually being dismissed.

The county's diversion courts are built around prosecutorial and judicial discretion. But Curry Mitchell envisions the District Attorney's Office setting up its own diversion programs that would ideally reach offenders before they get to court. She also wants to hire a social worker to help defendants navigate services.

Curry Mitchell has some other changes she wants to make as well. She wants to set up a Public Integrity Unit that would handle investigations of alleged misconduct by police officers and public officials. She wants to see the District Attorney's Office more involved in the community and plans to hire someone to serve as an LGBTQ liaison in the Victim's Assistance Unit or to train someone already working in the unit to be the LGBTQ liaison.

She also wants to collect and publish data on the office's prosecutions, including racial data that would help staff and the public track efforts to address inequities in criminal prosecutions.

Curry Mitchell says the current opioid courts work well for helping people with addictions when they enter the system. She believes the District Attorney's Office, the Monroe County Sheriff's Office, and county's public health department should do more still to educate the community about opioids and the availability of the overdose treatment Narcan. She also says she's unlikely to continue Doorley's policy of charging dealers connected to fatal overdoses with homicide.

Diversity in the DA's Office

Curry Mitchell offers one other direct criticism of Doorley: the lack of diversity in the District Attorney's Office.

Of the roughly 80 attorneys in the office, only four of them are people of color, she says. Doorley claims the ranks include six minorities. "Is that low?" Doorley asks. "Absolutely. But we don't have the candidates."

Doorley sent Curry Mitchell and another assistant district attorney to the National Black Prosecutors Association conference for two years. The conference has a job fair and both Doorley and Curry Mitchell saw it as an opportunity to recruit candidates of color to jobs in the office. "It hasn't really worked out," Doorley says.

Curry Mitchell says the conference and its job fair still present a good opportunity to recruit attorneys of color, she says. As district attorney, she says she would also reach out to organizations like the Hispanic Bar Association, Lavender Law Conference and Career Fair, and the National Black Law Students Association to recruit candidates.

Doorley says representatives from her office recruit from law schools. When a promising minority candidate does apply, the office often loses them to higher-paying law firms, she says.

Starting pay at the District Attorney's Office is $60,000 and there are people working there who have more than $150,000 in student debt, Doorley says.