The Dallas shootings and a divided nation 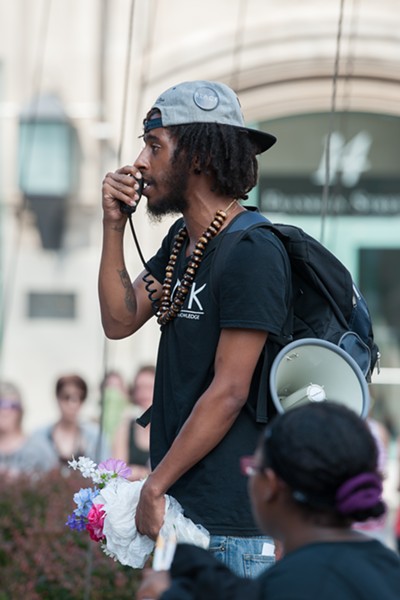 "This is just terrible," said an editor friend from Vermont Friday morning at our alt-media association's annual convention. "I'm really worried about what's happening in this country."

A City editor with us at the convention asked me whether this seems worse than the chaos of the 1960's. I don't know. Hard to tell. It's different, of course, from that period of civil rights protests, Vietnam War protests, the assassinations of Kennedy, King, Kennedy.

This is not that. Now is not then. The country survived the 60's. The mournful, graceful transition from John F. Kennedy's administration to Lyndon Johnson's reassured the world - and, I think, most Americans. Johnson went on to do both great and awful things, and we survived that. And we survived Richard Nixon's paranoia and criminality.

But the events of last week showed how little has changed in the psyche of this country. Johnson's civil rights achievements have been under attack ever since they were passed. Voting rights of American citizens have been eroded.

We don't know one another, don't understand one another. We can't imagine life from the perspective of others.

This is not new. The killings in Baton Rouge, St. Anthony, and Dallas last week are a part of something that has been building for years, back through Tamir Rice to Michael Brown to Eric Garner to Trayvon Martin to Emmett Till and on and on to the slave auction blocks.

The United States is a tragically divided country. We talk a good game, in our Declaration of Independence, in the words on the plaque at the Statue of Liberty, in our pride in Ellis Island. But we were a country divided from the start. And to realize the power and endurance of that divide, we have only to reread the words of the Kerner Commission:

"Our nation is moving toward two societies, one black, one white — separate but unequal." That was 1968. Forty-seven years ago. And now, throughout the country, public schools are highly segregated. Communities are segregated. We don't know each other, so we don't trust each other.

For a brief moment in 2008, there was hope that Barack Obama's election showed that we had changed. But Obama was elected despite the deep racial divisions in the country, not because those divisions had weakened. There was animosity toward him then, and it seems to have grown.

Commenting on the week's killings, New York Times columnist Charles Blow said he is afraid for the nation. "This is not a level of stress and strain that a civil society can long endure," Blow wrote. "I feel numb, and anguished and heartbroken, and I fear that I am far from alone. And yet, I also fear that time is a requirement for remedy. We didn't arrive at this place overnight and we won't move on from it overnight."

Time is a requirement for remedy.

Meanwhile, during the next two weeks Democrats and Republicans will formally choose their candidates for president. Barring some unforeseen event, one will be Donald Trump, the other Hillary Clinton.

And regardless of which one is elected, if the traumatic events of the past week repeat themselves - and it's hard to imagine they won't - I don't see how either will be able to unite the country. I don't see how either can help overcome the fear and anger and bring us together to make the changes we must make, in public policy, in attitude and understanding. Both Clinton and Trump are widely disliked and distrusted: the wrong candidates for this highly volatile time.

Like Charles Blow, I am afraid for this divided nation.