The Dady Brothers, four others get their Rochester Music Hall of Fame call

February 25, 2020
There was never any doubt that the Rochester Music Hall of Fame Class of 2020 would include The Dady Brothers among the musicians to be celebrated at the April 26 induction concert at Eastman Theatre’s Kodak Hall.

Few musicians here have been so highly regarded, and for as long, as the traditional folk duo. They played coffee houses and taverns, and shared stages with Pete Seeger, Tommy Makem, The Clancy Brothers, and Ani DiFranco. Going back to 1979, John and Joe Dady have released 11 albums as a duo, and one solo album apiece. Joe Dady died last year from leukemia at the age of 61.

Although The Dady Brothers have been primarily identified with Irish music — and led yearly tours to Ireland — that label does not do justice to The Dadys. They played Celtic music, bluegrass, Americana, gospel and Christmas favorites. They performed songs by The Beatles and Bruce Springsteen. They recorded an album of Erie Canal songs as well as the soundtrack to a musical about Stephen Foster. 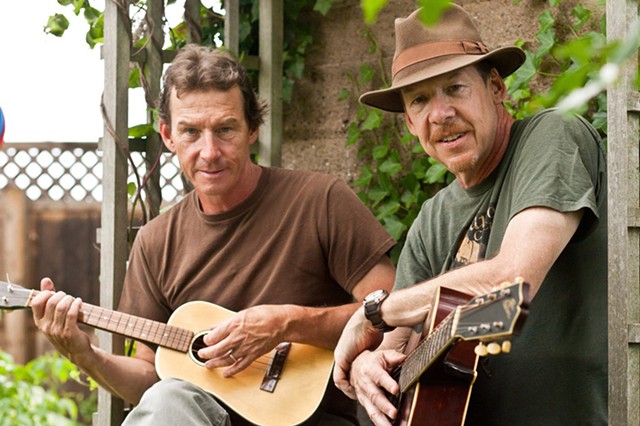 The Dadys sang their own songs as well, often reflecting their love for their home of western New York. John Dady’s instrumental, “Little Stream,” celebrates the tranquility of fishing, one of his favorite pastimes. Joe Dady’s “My Conesus Cabin Home” captured the rustic log house where he lived, which served as a mecca for pilgrimages by local musicians in search of the muse.

As Rochester natives, The Dady Brothers estimated they had played 7,000 shows over some 45 years. They ran a few open-mic nights in Rochester, helping young musicians get their feet under themselves in their own careers. John played guitar. Joe mastered fiddle, guitar, banjo, tin whistle, harmonica and Uilleann pipes. Both men sang as well.

The Dadys were on many recordings by local players, as well as a compilation album of musicians collaborating with Seeger. They shared a stage with Clarence “Gatemouth” Brown, The Band’s Rick Danko, Arlo Guthrie, Kate Wolf, Johnny Paycheck, Papa John Creach, Jay Unger, Molly Mason, and Cherish the Ladies.

As Joe’s health deteriorated, John made stem cell donations in the hope of fighting off the leukemia. The procedure failed to halt the disease. Joe Dady died on May 18, 2019, with his brother and family members by his side.

The following November, a celebration of Joe Dady’s life, featuring performances of Dady songs and some of Joe’s favorite tunes, resulted in a packed Hochstein Performance Hall. And that emotional yet upbeat evening was a clear reminder that The Dadys had been overlooked by the Rochester Music Hall of Fame for too long.

The remainder of the new class, announced Tuesday morning, represent diverse aspects of Rochester’s contributions to the arts. Two inductees, Mick Guzauski and Michael Laiacona, are among the top behind-the-scenes knob twiddlers in the music industry. Mick Guzauski is a Grammy-winning sound engineer and producer who has worked with many of the biggest artists in the industry, including Michael Jackson, Prince, and Eric Clapton.

As a high-school student here in Rochester, Guzauski worked in a stereo store, buying used equipment which he repaired and installed in a recording studio in the basement of his parents’ house. He began recording with two Eastman School of Music students, bassist Tony Levin and drummer Steve Gadd, before hooking up with Chuck and Gap Mangione. Guzauski followed Chuck Mangione out to Los Angeles to produce Mangione’s 1975 album “Chase the Clouds Away,” and he was off and running.

Levin, Gadd, the Mangiones, trumpeter Lew Soloff, the singer-songwriters Don Potter and Bat McGrath, and Guzauski were all a part of that amazing Rochester scene in the late 1960s and early ’70s in Rochester. Now all of them have made it into the Rochester Music Hall of Fame.

Having helped to establish MXR guitar effects pedals as the leading product of its kind, in 1975 Michael Laiacona founded Whirlwind, which provides technology for virtually every concert venue and tour today. The most recent Super Bowl halftime show was powered by Whirlwind, which Laiacona started on Boxart Street before moving the business to Ling Road in Greece about two decades ago.

Also joining the Rochester Music Hall of Fame is jazz singer Nancy Kelly, a Rochester native who has released six albums and was named “Best Female Jazz Vocalist” twice in the DownBeat Magazine readers’ poll. She remains a frequent performer in the area.

The Hall also welcomes jazz drummer and percussionist Roy McCurdy, who was born in Rochester and studied at the Eastman School of Music. By age 17, he was playing with Roy Eldridge and Eddie Vinson, and went on to work with Sonny Rollins, Count Basie, Ella Fitzgerald, and Sarah Vaughan.

Each year’s list of inductees is shaped by who is available to appear at the induction concert. Big names remain on the list: Soprano Renée Fleming is perhaps the most notable. Significant local rock acts The Chesterfield Kings and The Colorblind James Experience have yet to be acknowledged. Wang Leehom, a huge film star and musician in Taiwan, was born in Rochester and is a Pittsford Sutherland High School and Eastman School of Music grad.

There are even individual moments that call for representation in some manner: The Rolling Stones’ War Memorial concert that was halted by police out of fear that a riot was breaking out; Red Creek Inn kicking out a young and then-unknown Irish rock band called U2, which was launching its first American tour here; an unruly Elvis Costello getting thrown out of Scorgie’s bar; David Bowie and Iggy Pop getting busted for possession of pot. Clearly, the music industry has issues with Rochester’s authority figures.

The previous eight Rochester Music Hall of Fame induction concerts have drawn large audiences, and the musical performances have played a role in those successes. Most notably, there was Paul Simon’s surprise appearance for the 2018 induction of Gadd and Levin.

Rochester’s Prime Time Funk will once again be the house band, and will back Kelly. McCurdy will play as well, backed by local musicians including guitarist Bob Sneider and saxophonist Colin Gordon. Robin Zander, the lead singer of the Rock and Roll Hall of Fame band Cheap Trick, as well as Grammy-winning guitarist and Billy Idol collaborator Steve Stevens will pay tribute to Michael Laiacona. Zander and Stevens will do a handful of Cheap Trick and Idol songs. Other performers, including those for Guzauski’s induction, have not yet been announced. John Dady will also play, joined by Rochester musicians such as multi-instrumentalists Perry Cleaveland and John Michael Ryan, as well as New York City players. That performance will almost certainly constitute the emotional core of the evening.

Tickets to Rochester Music Hall of Fame’s 2020 induction ceremony start at $33 and are available now at rochestermusic.org.

This article has been updated and revised to reflect the lineup of musicians playing at the April 26 concert. A previous version of the article had incorrectly stated that the ticket price starts at $31.