This is the picture of ethnic hatred in America:

A young white man in a hooded sweatshirt, sneaks up to a small neighborhood store in the dead of night and spray-paints an obscenity and racist message on it. When cars approach, he darts behind a shed to hide, then runs back out to spray more words. Back to the shed.Back to the store. And then he scurries away.

This particular eruption of pestilence took place in the Neighborhood of the Arts, home of this publication, three museums, a public school, a theater, numerous galleries and studios, restaurants, apartments.... It is a lively, welcoming place, where architects and auto repair specialists, weavers and stylists, bakers and photographers, movers and actors and writers work, where a craft brewery is putting down roots and a wonderful variety of people live: young, old, affluent, low-income. 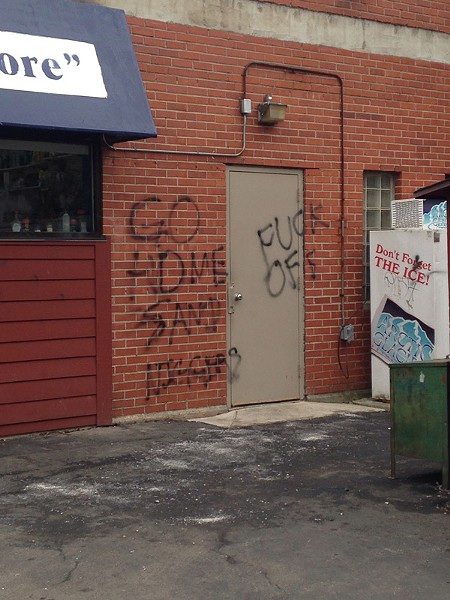 The urban, eclectic nature of our little piece of Rochester is fostering tremendous growth. It is a great neighborhood, and it makes me happy just to wander up and down its streets. And in the dark of night one night last week, somebody lashed out at one of our neighbors, hurting him, and shocking us all.

I can't get the image of this young man out of my mind. And I can't help but think that he lives in the neighborhood. How else would he even know the Corner Store exists, let alone that it's run by men with Arab names?

I wish I knew who this spray painter is, and why he did what he did. Why he hates people he thinks are different from him. I'd love to know where this hatred came from.

And I'd love to know what any of us could do to change his mind.

Because this young man, spray-painting his hatred in our neighborhood in the dark of night, scurrying away when he was satisfied with what he had done, represents a part of this region and a part of this country that we need to come to grips with. And I'm not sure we know how to do that.

We have two major efforts under way right now to address the problem of ethnic hatred: The D&C's Unite Rochester and the YWCA's Stand Against Racism. Both are important, educating us and encouraging us to try to reduce distrust and prejudice. But how do we reach someone like the young man who sprayed hate onto the wall of the Corner Store?

Some of us may be tempted to say that the attack on the Corner Store is inspired by the vitriol Donald Trump is voicing in his campaign. But this kind of hatred existed long before Donald Trump. It's not a Republican thing. It's part of the American fabric - and the French fabric, the Norwegian fabric, the African fabric. Tragically, it's human nature.

Weirdly, as I was writing this on Saturday, my residential neighborhood - a few blocks away from the Corner Store - was awash in young white people wearing green, partying to celebrate... the Irish! Who not that many years ago were themselves the object of vicious hatred.

We've put that behind us, I guess (at least enough to celebrate this part of our melting pot one day a year). Maybe some day we'll overcome the racism that continues to thrive, in Rochester and around the country. But we have a really, really long way to go.

You would think that by now, this nation of immigrants and native people would be celebrating our diversity, not fearing it, and making sure that everyone in the country is able to take advantage of the enormous foundation our forebears created.

But as we saw in the Neighborhood of the Arts last week, and as we're seeing in the presidential campaign, many Americans want us to be a nation populated only by white Western European immigrants' descendants. And a man who could very well become president is now their spokesman.

Rochester police ask that anyone with information on the suspect's identity call 911 or Crimestoppers, (585) 423-9300.