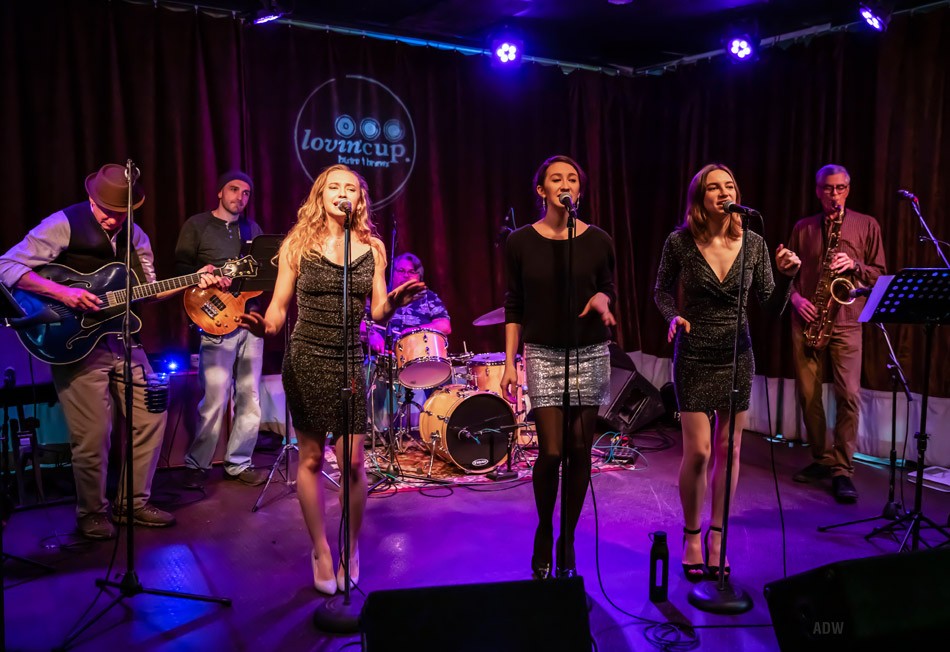 [ UPDATED AND REVISED 6/29/19 ] Like the dynamic age range of its players, The Cool Club & the Lipker Sisters — who will play Three Heads Brewing on Saturday, July 6 — are a swing-jazz collective that blend familiar and new into one cohesive sound.  Hailing from the Finger Lakes region, the group consists of guitarist-vocalist Rick Hoyt, bassist Trevor Findley, drummer Joe Galusha, and woodwind player Tom McClure — The Cool Club — as well as the three Lipker sisters, Marilla, Grace, and Elizabeth. Using sophisticated blues-jazz musicianship and intricate three-part harmonies, The Cool Club & the Lipker Sisters find ways to keep  swing music relevant for newer generations.

Originally formed by Hoyt and Galusha, The Cool Club started off as a jazz quartet back in 2008, and has experienced various personnel changes since then. It wasn't until five or six years after its inception that Marilla Lipker discovered the band at a wine bar and asked if she could join in, after noticing they didn't really have a vocalist at the time.

"I found out how to get in touch with Rick, and he told me to show up at this informal jazz jam in the basement of the wine bar, and I went, sang a couple tunes. And I think I did a gig with you guys, and then I kind of went the next step and said, ‘I have two more sisters and they also can sing.’"

That was the turning point for The Cool Club. "They came and took us, transformed us into something brand new," Galusha says. At some shows, The Cool Club still performs with Marilla Kipker as the only vocalist. "We call it ‘Cool Club Light,’" Galusha says. While The Cool Club also performs as its own entity, the Lipker Sisters perform solely with The Cool Club, aside from solo singer-songwriter projects.

The Lipker sisters were raised in a musical household, with their father leading an AC/DC cover band and their mother listening to jazz constantly. Marilla Lipker thinks back on how the sisters’ family life began their lives as musicians together. "With three of us we could hone in on those three part harmonies that are really common in jazz," she says.

Galusha laughs as he reflects on performing and touring with the three sisters. "Practices are like a zoo, the three of them together,” he says. “They keep you laughing, keep you smiling."

It’s clear that the rapport between band members is important. “We have so much fun at practices,” Lipker says. “We're very up-front as a band. If someone has an issue, we have a very loud conversation, and it's over in a few minutes and onto the next thing."

Lipker says that moving beyond the pecking order of three sisters growing up together to working together as adults has been challenging but positive. "But there is definitely a pecking order,” Galusha says. “and Marilla is the mother hen."

With members of The Cool Club in their sixties and the sisters in their twenties, there is a familial dynamic between each player, supporting and encouraging each other along the way, crazy personalities and all.

The group performs about 40 percent originals, 60 percent covers, with Rick Hoyt writing most of the original tunes. Choosing a setlist for each show amongst so many musicians is a process.

"It's basically like a grand jury every time there's a new song added to the setlist,” Lipker says. “There's seven people, each with a strong opinion about what's being added.”

“Mine are automatically ignored," Galusha says.

"Yeah, Joe's are ignored just by proxy,” Marilla respond, “but everyone else gets a chance to defend their ideas."

The band's mission is to show people a good time and prove that music from the 30's through the 50's is still relevant, dealing with the same topics and evoking the same emotions as contemporary music does.

The Cool Club and the Lipker Sisters are preparing to collectively release a self-titled debut album soon. The album was recorded live with zero overdubs — over the course of two days at Electric Wilburland Studio in Ithaca — in order to capture the band's raw, spot-on delivery. The record includes original dance numbers like "There's Always Someone" and "Sweet Spot," which feature sophisticated grooves and sultry lyrics sung in flowery vibrato by the sisters, while classic swing-jazz covers like "Boogie-Woogie Bugle Boy" and "I Got Rhythm" are also included.

An earlier version of the article incorrectly listed the concert date as Friday, July 5.