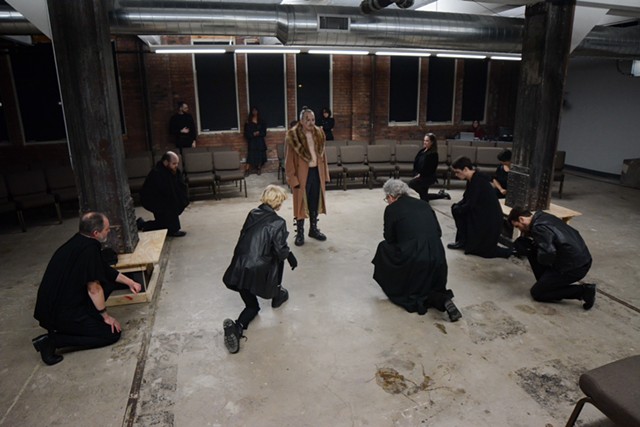 Entering the second-floor Temple Theater Loft almost feels like stumbling upon an underground dance party. An eclectic playlist jumps from pop-rock to rap-metal. There’s no set for the play, just the industrial-style room with two large pillars and exposed pipes in the ceiling, and chairs set up in the round. Lightbulbs hang from wires.

It’s an unassuming set up for Shakespeare’s “Richard II,” directed by Carl Del Buono, which opens the inaugural season of The Company Theatre.

Two actors carry signs placing the show in 1390s England, but the setting feels more punk and post-apocalyptic. A wordless introduction sets an offbeat tone with a pantomime performed by actors in animal masks. King Richard, played with swagger and angst by Rich Steele, enters shirtless with a golden and black jacket. His eventual rival Henry Bolingbroke, played by Ged Owen, also comes out shirtless, in a ponytail bun and nose ring. The rest of the cast wears black, a goth assortment of jackets and combat boots. The occasional set pieces are minimalist, including a makeshift throne made from a black crate.

The story begins with King Richard monitoring a dispute between Henry Bolingbroke and Thomas Mowbray over the death of Gloucester. Richard sentences them to a trial by combat. Richard stops the fighting and instead of letting them finish the duel to the death, banishes them both.

Shakespeare history plays are challenging to produce. In 2022, who cares which rich white guy got absolute power in 1400, or about the details of centuries-old drama amongst the British monarchy? And yet, this production nails it. Their solution to livening up history: have the two men competing for power also be ex-boyfriends. 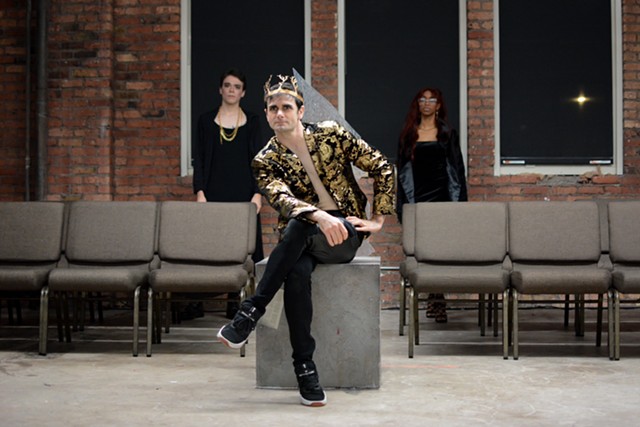 King Richard and Bolingbroke share a long kiss before the trial by combat begins, giving Richard an interesting motivation for intervening: he would rather see his lover banished than dead. Richard moves on to date the Duke of Aumerle, but the homoeroticism and lost love underpins Bolingbroke’s quest to remove Richard from the throne. These are some messy exes, and their drama impacts the entire kingdom.

As with any Jacobean play, it’s helpful to read a synopsis beforehand. The finer plot points of Richard’s incompetency as king can be tricky to follow, even after skimming Wikipedia before the show. However, the cast has such a masterful command of the language that the emotional stakes are always clear. Many in the cast have done Shakespeare in the Park, and they deliver their lines with the strength and power of addressing an outdoor venue.

The minimalist design generally allows the acting to shine, with the exception of the lighting. Other than a few uses of strobe light, most scenes are fairly dim. This may be an artistic choice: There are many references to shadows, like when Bolingbroke tells Richard, “The shadow of your sorrow hath destroyed the shadow of your face.” Or perhaps the matinee performance was unfortunately impacted by sunlight coming in from the window. Over two hours is a long time to be mostly in the dark, and it would have been nice to see the actor’s faces.

Even so, the actors are compelling enough through their voices and body language. Much thoughtful attention is given to Shakespeare’s dense text, and yet the production doesn’t take itself too seriously. An eclectic and playful soundtrack, ranging from opera to rock, punctuates transition changes. The final moment before intermission features Richard and Bolingbroke holding hands and walking offstage together against the backdrop of Seal’s “Kiss By a Rose.” The final image of the play is even more delightfully extra.

The matinee audience was small and appreciative, but this production deserves to play to a full house. If you’re going to do Shakespeare, do it with gusto and make it gay.

The Company Theatre's production of "Richard II" continues, Thursdays to Sundays, through Oct. 30. $18 for students and seniors, $22 general admission. For more information and tickets, go to thecompanytheatreroc.org.