Notes from the weekend

City last weekend stopped in to see Nate Hodge and Cordell Cordaro's collaborative exhibit of artwork that currently fills the 26th floor of The Metropolitan at One South Clinton Avenue. Formerly called Lincoln First Tower, and then later Chase Tower, the 1974 building is an iconic part of Rochester's skyline and is known for its rows of vertical white "fin" stripes and a base that curves outward as it meets the ground.

Gallina Development Corporation purchased the building in March 2015, and has been working toward developing the building as a mixed residential, business, and restaurant space.

Hodge approached the the company earlier this year about having the show in The Metropolitan, and they were open to the idea. ArtAwake was hosted on a lower level in April.

"As local developers, we're looking to partner with the community," Lauren Gallina said at the Hodge/Cordaro opening party on Saturday. "We're looking to do more engaging things with local artists, developers, and residents. We're doing this to revive downtown, and want to include everyone in that bigger picture that we're building."

Hodge and Cordaro transformed the in-transition space in just three weeks, covering the outdated wallpaper with kinetic line work, washes of color, and elements of human forms. Framed collaborative artwork is installed on some walls, and along with a few racks of prints, is available for sale.

Slideshow Hodge/Cordaro at The Metropolitan 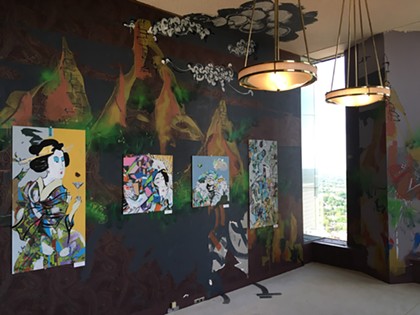 Though there are business tenants on the lower levels, renovations are underway on various upper floors. Apartments are being constructed on the 17th and 18th levels, and will be available to rent in the fall. The 26th floor, where the art show is installed, will be converted into condominiums, and is projected to be ready for tenants next year.

The amazing view from the massive windows of these to-be-high end residences provide a superhero's perspective of the city -- Rochester unfolds in every direction as a sea of rooftops and activity in the streets, there is an excellent view of the wending Genesee, and in the distance, Lake Ontario melts into the horizon.

Did you miss the opening? The artwork will be up for a week and available for viewing and purchase on Monday, June 20; Wednesday, June 22; and Friday, June 24, from 2-7 p.m. each day. For more information, check out the event page on Facebook, and learn more about The Metropolitan here.