December 13, 2018
About 200 educators, parents, community leaders, and Rochester school district administrators turned out  this morning for a public forum held by State Education Commissioner MaryEllen Elia, Regent Wade Norwood, and Distinguished Educator Jaime Aquino to discuss Aquino's report about the district's problems. The report, which was released last month, gives a frank and disturbing description of a school system that doesn't come close to fulfilling its primary purpose: educating children. 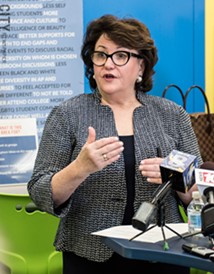 The system is constricted by adults and their needs, Elia said this morning and that must change, or the district will continue to flounder.

Elia said she has made many visits to the district and has watched dedicated and talented teachers and administrators who are doing their best. But, she said, their effectiveness is limited.

But, she said, they are "working in an echo system that is totally broken."  State education officials and Aquino aren't attacking people, she said: "It's a failure of the system."

Elia stressed that the changes the district needs will take time to fully implement, and that it won't be easy. Years of reports have highlighted the district's problems, she said, but the problem has been implementing change. And the need for improvement isn't limited to the school board, administration, and teachers,  she said.

"This community has to be with us," Elia said.

Aquino's report listed numerous issues at the root of the district's problem of low student achievement. Foremost is the school board's inability to act as a unified body and to distinguish between board leadership and day-to-day management. Another problem: While turnover among at the superintendent level has been high, turnover has also been high at the senior management level, too. In addition, there is  a general lack of accountability at all levels, and the district faces a structural deficit that may result in massive layoffs.

Parents and teachers at this morning's forum agreed with many of the report's finding, and more than two dozen speakers added their own concerns. Some parents said they're concerned about protecting the district's children from racism and the trauma it causes. They were also concerned about the need to improve cultural competency.

Teachers asked how the state will continue to support schools that have been improving so they don't slide backward. And Elia and teachers at the forum also said they want to expand the use of a community school model, which engages, parents, teachers, and others.

Elia said the district has until February 8 to develop a plan responding to Aquino's report and his recommendations for change. Today's forum, she said,  is only one of several. Dates for future dates haven't been set, she said.