The Cinema's owner ponders its future 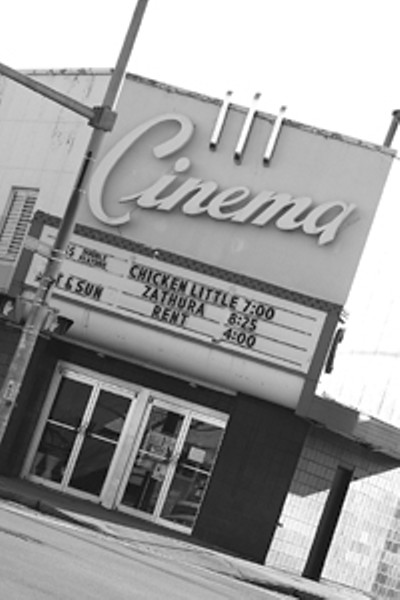 When Jo Ann Morreale hinted a few months ago that she might be getting out of the movie business, scores of city residents balked. While Morreale has operated the one-screen theater at the Clinton-Goodman intersection for more than two decades, the building itself has been a movie house for almost 90 years. Many who grew up frequenting the neighborhood haunt --- known nowadays as The Cinema --- can't imagine life without it. But time has begun to take its toll.

One of the two air-conditioning units has problems, and maintenance costs in general have been rising. Late last summer, Morrealle put the building up for sale. The media flocked to her side, a grassroots "save the theater" group (coordinated by the South East Area Coalition) took hold, tickets sales jumped, and a surprised Morreale began to rethink her options.

Morreale charges only $3 for her back-to-back features, and one solution could be to raise prices. But Morreale says that would compromise her mission. "I wanted the intelligent, adult crowd that appreciated a reasonable price," she says, "a place to spend an evening and still have change back from a $5 bill."

To maintain her low ticket price, Morreale has always shown second-run movies --- a policy that would seemingly place her in competition with the newer, larger Movies 10 discount theater on West Henrietta Road. Morreale's clientele disagrees. They like going to the movies in their own neighborhood, they say. And while other area theaters charge several dollars for candy and popcorn, Morreale still sells candy bars for 50 cents and large popcorns for $2.

"There are no places like this anymore," says Mike Thompson, chair of the Ellwanger Barry Neighborhood Association. Joel Kunkler, community development coordinator for the South East Area Coalition, says Morreale, a science teacher at Edison Tech, didn't go into the movie business for the money. Rather, he says, it was for love of the trade. "Her primary thought process is not that the theater is a business," he says. "It's just a service she provides to the community." With its resident cat, a room where people can store their bikes, and a baby room for families who don't want to disturb other patrons, Morreale's theater is indeed an old-school movie house.

A study conducted by SUNY Geneseo faculty and students last year indicated strong support for a movie theater in the Cinema's southeast city neighborhood. "It complements the nightlife," says Dan Buyer, executive director of the South Wedge Planning Committee. In the survey, the Cinema was listed as key to "the larger experience that people want to have when they come to the South Wedge," says Buyer, "along with going out for a drink at Beale Street or going out to Lux." While bars like Beale Street and Lux typically attract people in their 20's and 30's, Morreale draws an older audience. And of the 20 or so people attending a SEAC save-the-theater meeting recently, less than a handful were under age 40.

Morreale herself seems more concerned with maintaining her current audience than tapping a new generation. "Currently my target audience is not the college crew," she says. "Kids don't have time for a double feature." And teens are even harder to draw, she says: "They want to see movies the first night they come out or the second night. After that, it's old news."

Nonetheless, Morreale and her supporters are looking for ways to diversify the Cinema's offerings. Ideas floated at recent SEAC meetings included working with Rochester Institute of Technology students to create a website, expanding the theater's offerings to include live performances, and hosting a lecture series.

Kunkler adds that while SEAC typically refrains from being involved with private business affairs, his organization believes both in the theater's viability and in Morreale's vision. "I think she does this because she loves movies and because she loves her community," Kunkler says. "She doesn't want get rich and fat from this."