James Johnson, an innovative architect who gave the Rochester region some of its most distinctive structures, died last week at the age of 83.

For many Rochesterians, Johnson's isn't a household name. But unless you've never been downtown, you've seen his work. You've seen it if you've entered Powder Mills Park from the east, driven down West Ridge Road near the Mall at Greece Ridge, or through the village of Naples.

The Liberty Pole in downtown Rochester is Johnson's. So is the organic pod construction in Perinton known as the Mushroom House. St. Januarius Church in Naples, St. John the Evangelist Church in Greece, Temple Sinai in Penfield, the Phillis Wheatley Library on Dr. Samuel McCree Way and the AME Zion Church on Clarissa Street in Rochester: all unusual, unboxy structures, all Johnson's.

Johnson was a superb, versatile designer, and his commissions included homes for wealthy clients as well as affordable housing. But what enabled him to construct some of his most innovative creations was the material he used: concrete.

"I just love it," he told architecture student Christopher Brandt, now an architectural intern with Bero Architecture, in 2011. "I think it's the greatest material God ever invented for us."

"He used modern materials for an ancient purpose – the architect's basic task – creating interior spaces for our use and enjoyment," says architectural historian Jean France.

For centuries, buildings were made from what existed in nature: wood, stone, and clay, France notes. And the materials' limitations limited the design of the buildings and their interior spaces. "With the development of modern construction, buildings were no longer constrained by gravity," says France. "They could swoop and nestle."

"Swoop" and "nestle" might not be words we'd use to describe buildings made of concrete, but Johnson's buildings do just that.

In an interview with Johnson published as part of his studies at BU, Christopher Brandt asked him what interested him about concrete as a building material.

"It flows through my veins," Johnson said. "I don't know; I just love concrete. If someone said to me, 'I want a magical material that will bend, curve, and do all these various things, and if I could just shoot it with a hardener, and it would all just hard as I moved it along, and I just built with a crane or something... wouldn't that be the best material in the world?' And I thought, and I said, 'Yeah, that's concrete. I've got it."

"It will do anything you want it to do," Johnson told Brandt. "It just takes a bit of knowledge of how to work it."

In interviews and e-mails over the past week, Rochesterians familiar with Johnson and his work shared their reflections of a man who was supremely talented, daring, reserved, "barrier pushing," devoted to collaborating with clients, humble, and modest – "the antithesis of Frank Lloyd Wright," said Cynthia Howk, architectural research coordinator at the Landmark Society.

"Jim understood most importantly that successful architecture, as he put it, 'was not begot merely from pushing a pencil around,'" said Brandt, "but instead grew out of an intimate relationship and understanding of the site, building, client, and collaborators. This is terrifically illustrated by photographs of Jim, even in his old age, working the concrete on site for the 2002 addition to the Mushroom House. There he was, helping with carving the petroglyphs into the sand and dirt mold and then in another photo in tall muck boots spreading the concrete." 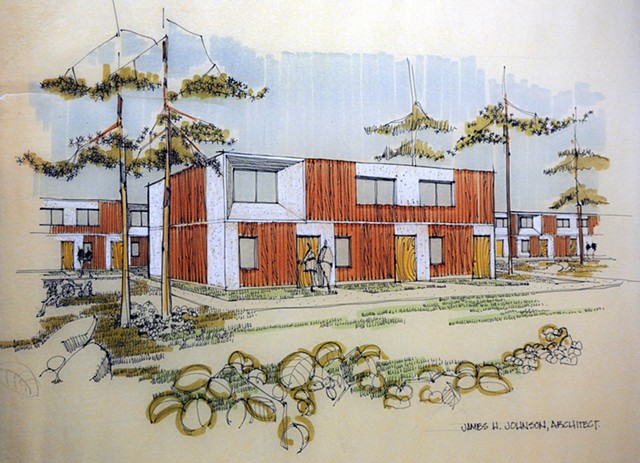 While his construction materials weren't "natural," nature was often at the heart of his designs. Johnson's architecture, said Rochester architect Craig Jensen, "is an outgrowth of a movement sometimes called Organic Modernism, a reaction to the technology, precision, and uniformity of International Style Modernism that was thought to be conquering the world in the first half the 20th century."

Organic Modernist buildings are usually "pure geometrical exercises," Jensen said: the Sidney Opera House, Dulles Airport near Washington, the TWA Terminal at New York's Kennedy Airport. But Johnson's architecture "takes this idea to a new level, and celebrates not only these forms but also their imperfections – the ultimate beauty of nature being not only in the forms, but in the subtle variations that are the result of the complex relationships between the form, its growth, and its environment."

"In both nature and Mr. Johnson's architecture," said Jensen, "it is the imperfections that make it perfect."

Examples? They're "apparent in everything," Jensen said, "from Mr. Johnson's choice of structural solutions to his small-scale details. The 10 concrete roof sections that enclose the sanctuary of Temple Sinai were poured in earth-formed trenches on the ground before being lifted into place. Although the sections are similar, they each capture unique 'imperfections' from their individual, natural excavations. These subtle variations add greatly to richness of the overall form."

And the tile work at the Mushroom House "was created from many broken, 'imperfect' pieces of tile," Jensen said. "The 'imperfect' pieces are aggregated together to form an abstract mosaic that is richer than if the individual tiles within it were all pure forms."

"Jim's public buildings are remarkable," said Jean France, "innovative, sure, but practical and above all, communicating a message." But France also notes the importance of Johnson's "domestic buildings, his response to the challenges every architectural contract represents."

Architects must first respond to their clients, said France. Second, "but equal," they must respond to the site the work will inhabit. As examples, France said, "I like to compare two houses of nearly the same date, the early 70's," one designed for Robert and Marguerite Antell – the Mushroom House – and the less well known house in Pittsford designed for Dorothee Schwartz.

The Antell house is built above a creek. For Schwartz's house, the client "maximized what could have been an ordinary lot by siting the house away from the road and close to existing woods." The two, France said, are "equally imaginative and responsive to the client and the site."

"The Mushroom House is one of the sights of local architecture, visible from a well-traveled road," said France. "The Schwartz house is hidden, a good way the other side of a weedy field on the edge of some woods.

France describes the Schwartz house as a structure whose "tall roof spirals up like a sail bending in the wind, shielding a living space that reaches three stories."

And yet if you can get a view from the road, France said, "all you'll see is that tremendous roof spiraling above the base. Inside that is a space is entirely open to a wall of glass. It's overwhelming."

Rochester is fortunate in that so many of Johnson's works are easily accessible to the public, at least on the outside. But with Johnson's designs, the outside is just the beginning. The Landmark Society's Cynthia Howk offers two examples:

"St. Januarius and Temple Sinai are two houses of worship that I'd known since they were built, as I'd driven by them many times over the years. They're situated in two very different settings. Temple Sinai is nestled in a wooded site off Penfield Road, while St. Januarius sits front-and-center on Naples' Main Street corridor and is certainly the most distinctive building in that village."

"However," Howk said, "it wasn't until I experienced them from their interiors that I came to fully realize what remarkable buildings they are. Temple Sinai's towering glass walls allow the wooded setting to 'come indoors' into the sanctuary – giving you the feeling that you're actually sitting outdoors. This feeling is further enhanced by the trailing vines that are growing upwards on the inside – not outside – of the pre-cast concrete walls of the sanctuary."

"At St. Januarius," Howk said, "the 'outdoors' comes into the sanctuary via the many colored glass portals. It was an overwhelming surprise to see the light-filled sanctuary, which I'd expected to be rather dark, with little natural lighting. Instead, it absolutely glowed, as the mid-day sunshine poured through those distinctive portal windows." 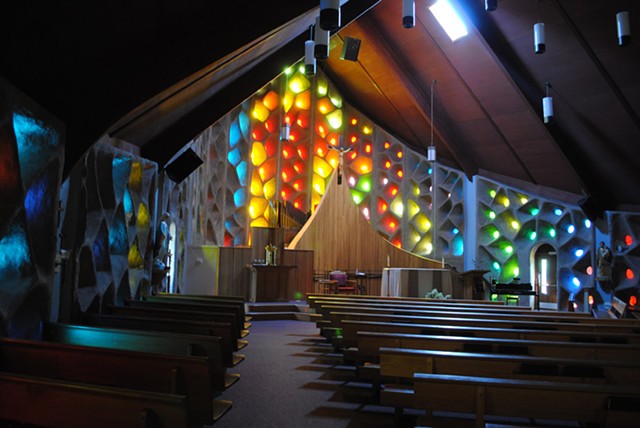 St. Januarius is also a favorite of Christopher Brandt's. With it, Brandt said, Johnson combined "a gothic architectural ideal – the maximization of stained glass windows to light the interior space – with a strong metaphorical reference to the surrounding vineyard landscape."

St. Januarius has the shape of a grape leaf, with walls that are stained glass windows, "each color representative of a different varietal of grape," Brandt said. "When the morning light pours through the walls of this church, the effect is truly beyond words."

Often equally compelling in Johnson's interiors: the sense that the space soars upward. "A building could be the incarnation of an emotion," said Jean France, "as is most evident in his religious buildings. It could be sculpture on a gigantic scale, as is the Liberty Pole. It is always the response to the needs and wishes of the client, as is most evident in two of his remarkable houses."

"In a way," said France, "his buildings are all more than shelter. They are human values and feelings given architectural form. The form is innovative – modern techniques and modern materials – but the gesture behind the form is eternal."

And in his religious buildings, France, said, "there is an almost sub-liminal connection to tradition: St. Januarius church overflowing with glowing stained glass, Temple Sinai lifting its tent-shaped walls in the woods. Each incorporates echoes of reinterpreted traditional form; each recognizes and celebrates the emotional connection of religious commitment."

"We wrap our buildings around our useful spaces," France said. "New forms only underline the continuity of human use. By using startlingly innovative forms and materials, Jim Johnson made us look again at our world."