"The Birmingham Project" by Dawoud Bey

Currently on view at George Eastman House are 13 photographic diptychs that Chicago-based photographer Dawoud Bey created to commemorate 6 children killed in Birmingham, Alabama, on September 15, 1963. Each of Bey's diptych portraits — of which 16 were created — juxtapose boys and girls the same ages of the victims (11, 13, 14, and 16), with adults who are the ages that the murdered children would be today, had they lived. In this work, Bey metaphorically presses un-pause on young lives distilled in memory. 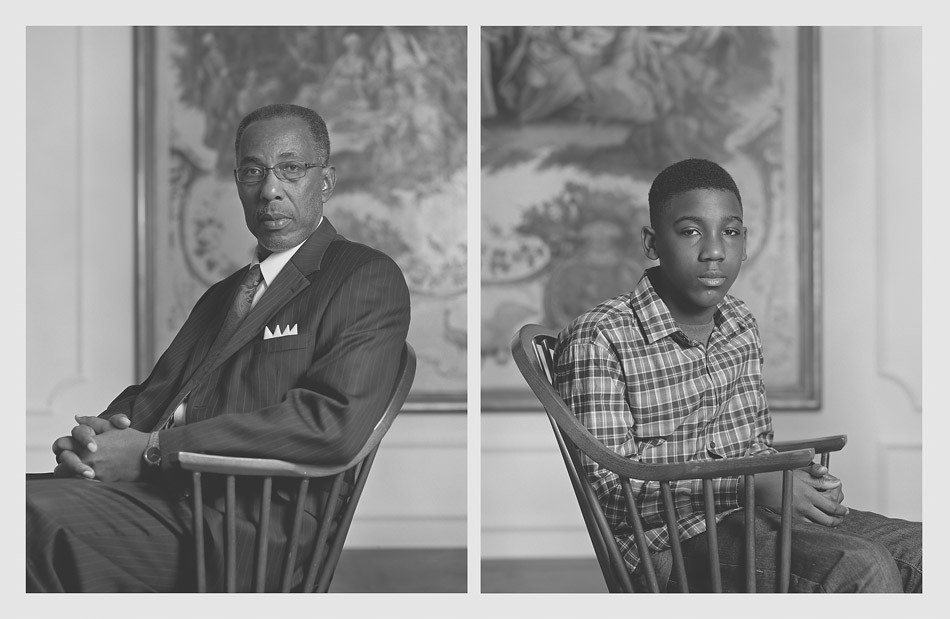 The Birmingham Project's origins stretch all the way back to a catalytic moment in 1964, when 11-year-old Bey saw, in his parents' copy of the book, "The Movement," the haunting hospital bed photo of Sarah Collins, who was injured in the bombing of the 16th Street Baptist Church, and forced to miss her sister Addie Mae's funeral. Addie Mae was 14-years-old when she died. The blast took the lives of three other girls — Denise McNair (age 11), Carole Robertson (age 14), and Cynthia Wesley (age 14) — and injured 17 other people. Two boys, 16-year-old Johnny Robinson and 13-year-old Virgil Ware, were also shot and killed in the aftermath of the Sunday bombing.

"The secure space of the world that my folks had tried to create for me was completely displaced by this photograph," Bey says.

Bey says the image seared itself into his subconscious, and about 9 or 10 years ago, it suddenly came back to him. He felt he needed to engage this history more directly, and says he decided to form a project around the moment to which that photograph is connected.

The artist decided to visit Birmingham in order to gain a sense of the place and how the past was inhabiting the contemporary moment. He explored how he might visualize the past in the present moment in some resonant way, without being didactic, and how to bring the visual poetics of photography into this conversation.

Since 1993, all of Bey's photographic projects have come out of collaborations with institutions, and this one was no different. Bey contacted the Birmingham Museum of Art and began discussing a partnership. For seven years, he visited Birmingham, establishing relationships that would allow him to gain a deeper sense of exactly what the history of the place was. "Rather than going there to make work about something that I thought I knew, I was trying to find out something more and make some work about that," he says. "I always assume there's something I don't know."

About two years before the 50th anniversary of the bombing, the museum suggested having a show of Bey's project in time for that occasion. "The goal was what made everything snap more decisively into focus," he says.

Bey spent time in the archives of the Birmingham Civil Rights Institute, and found out about the two boys, Ware and Robinson, who were killed that day during the violent fallout of the bombing, and who have largely been left out of the historic narrative of the event. "Whatever I was going to do, it felt really imperative that I embraced those two boys within the shape of the project," Bey says.

Bey decided to make photographs of contemporary young African-Americans in Birmingham, "as a way of giving tangible physical presence to these young people who have, at best, a mythic presence" in our imaginations, he says. By showing what a black girl of 11 or 14, or a black boy of 13 or 16, looks like, he hoped to evoke the presence of the children.

He met the challenge of how to visualize the passage of stolen time by pairing each image of a child with one of a contemporary adult in Birmingham. "Fifty years ago, the older people were the ages the killed children were, and they remember that day. That history is inside of them," he says. The project also became about making a representative portrait of the contemporary black community in Birmingham. 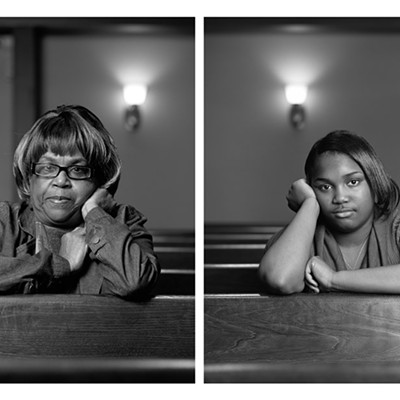 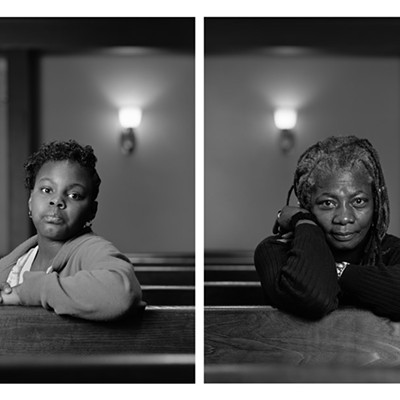 "The Birmingham Project"
By Rebecca Rafferty
Click to View 5 slides

Bey created an open call for subjects through flyers, social media, and Craigslist, and by talking with people in barbershops, beauty salons, and schools. Each of the faces in these images show a calm, self-possessed nature, which is especially fascinating to see in children of this age.

"What I'm interested in mostly is not the pleasant, public face, but the quiet, introspective, interior person that we all are," Bey says. With minimal direction and by creating a calm space, Bey allows any distracting environment to dissolve so that he can identify and capture this unguarded, interior quality when he identifies it. "I'm trying to create a kind of nuanced performance of oneself," he says.

Each of the subjects were photographed individually, and the careful pairings were made after, with attention to mannerisms, expressions, and clothing.

This is the first black-and-white work Bey has created since the 1980's. "Because this project references history, I wanted to use a material that was appropriate, even though the scale of them makes them conspicuously contemporary," he says. The confronting work thus exists at a crossroads of the past and the present.

At the opening of the exhibition, Bey's subjects were not only visiting an institution they were formerly not allowed to enter, they were doing so because they were featured on the walls. So the project also became about bringing a community into a once-forbidden space, to see themselves represented in that space.

Bey also created a split-screen, single-channel video, "9.15.63," which juxtaposes a child's eye view of treetops and roofs and sky through the window of a moving car as it approaches the church, with slow-pan footage of significant places which would be empty on a Sunday morning: the safe black social spaces of a barbershop and a beauty parlor, the contested space of a luncheonette counter, and a classroom, which would have been segregated back then. "I wanted to find another way to talk about that Sunday morning, of visualizing the moments before the moment that we know," Bey says.