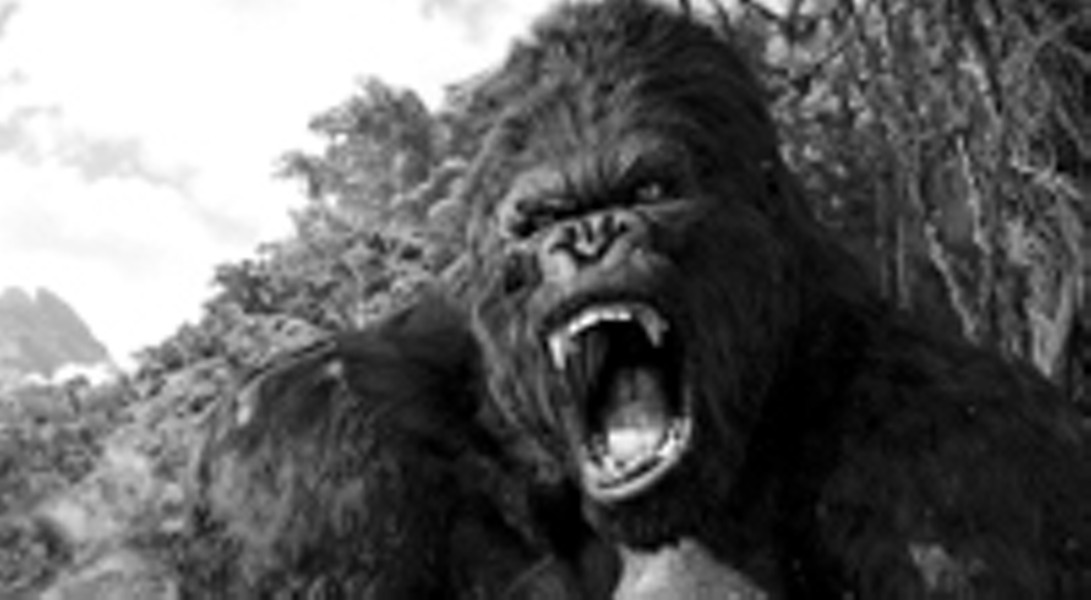 Universal Pictures Thanks to state-of-the-art technology: a more realistic Kong.

One of the greatest movies of the greatest decade in American film, the original King Kong addresses not only its own time, but perhaps all time --- beyond its importance in the art of motion pictures, the great ape haunts the imagination, dwarfing all the other monsters in the crowded population of movie creatures. The remarkable development of contemporary motion picture technology, along with the general paucity of ideas, suggests the inevitability of the new remake; the choice of Peter Jackson, the man responsible for the grandeur of the Lord of the Rings saga, to direct it seems positively inspired.

Set in the 1933 of the original, which possessed a special relevance, the new version employs essentially the same plot and people, but provides a good deal more background and exposition before it launches its characters on their voyage to SkullIsland, domain of monsters, the kingdom of Kong. The director turns Ann Darrow (Naomi Watts), immortalized by Fay Wray, into a dancer and juggler in a vaudeville comedy act, a bit that comes in handy on the island when she charms her abductor. He shows Carl Denham (Jack Black) running out on his creditors, bouncing checks, and tricking Jack Driscoll (Adrien Brody) into accompanying him aboard the ship to write the movie that will in effect become something like King Kong.

More important for most audiences, the picture spends a considerable amount of time --- and its enormous budget --- on those special effects that in our time too often pass for filmmaking. The various dinosaurs, gigantic vampire bats, and huge, disgusting insects make the new SkullIsland, where evolution stopped (think Kansas), more dangerous, more frightening, and more real than the models on the old studio back lot. Because all sorts of digital wizardry now replaces the puppets, stop motion animation, forced perspective, and matte shots of the past, all those menaces move with speed and a smooth and sinuous grace.

While retaining (and enhancing) most of the essential scenes and sequences from the original, the director adds a number of prolonged encounters between the crew and a whole zoo full of grotesque creatures. He shows a lengthy dinosaur stampede right out of Jurassic Park, another picture inspired by the original, and a particularly intense battle between the humans and a swarm of enormous insects --- grasshoppers, cockroaches, scorpions, centipedes --- that crawl all over the horrified men. Perhaps most disgusting, a dozen huge lampreys pop out of a pond and attempt to devour the crew, engulfing their heads and sucking them in like giant, toothed vacuum cleaners.

The picture naturally must revolve around the title character, the giant ape who abducts Ann Darrow and famously falls in love with his captive. Thanks to state-of-the-art technology, Peter Jackson's Kong moves more rapidly and athletically than his predecessor and appears even more powerful, battling numerous beasts and destroying large portions of the landscape in a fit of pique. Once again, of course, the beauty and spirit of his lovely victim charm him into some sort of gorilla tranquillity as he regards her, in Jack Kerouac's words, with huge eyes of tender love, and once again, her presence ultimately causes his defeat and death.

When the survivors capture Kong and bring him back to New York to face his destiny, the picture again follows the original, even to the final confrontation atop the EmpireStateBuilding. There Jackson's work betrays his own failures of imagination, as he slows down the action and prolongs and repeats just about every shot, turning the exciting conclusion into an excruciatingly sluggish display of sentimentality. The chained beast's savage rage against civilization, mechanism, capitalism, the symbolic revolutionary gesture of the Great Depression, turns into soppy pathos and mawkish banality.

Except for Adrien Brody, who comports himself with restraint and a measure of irony, the acting demonstrates a good deal of confusion. The cast cannot seem to decide whether to play for laughs or for real, whether to camp it up or satirize the whole business; as a result, Jack Black atrociously seems to be impersonating a sinister and demented Orson Welles and Naomi Watts spends most of her time weeping and looking soulful at the ape and Brody. Peter Jackson now joins George Lucas and Steven Spielberg in that group of directors who substitute technology for imagination, mechanical, optical, chemical, and digital tricks for good writing and clear thinking.