The better to hear you with 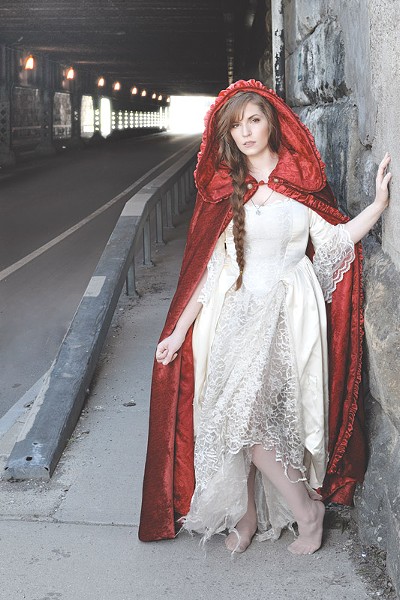 PHOTO PROVIDED Singer-songwriter Kaylin Cervini has a thing for fairy tales, especially Little Red Riding Hood.
You can find more about the singer-songwriter and her new EP, "Breadcrumbs," at facebook.com/kaylincervinimusic.

The music on singer-songwriter Kaylin Cervini's new EP, "Breadcrumbs," floats on the healing end of hurt. Hurt from a tragic loss (that served as the kick start to her career) and whatever hurt her audience learns to confront by this young lady's fearless example. Cervini's music also circumvents the everyday humdrum of songs steeped in reality — you can hear it in the power of her voice. That's not to say she avoids real life, rather Cervini creates fairy tales in which tragedy, love lost, love found, and so on, are exorcised with a childlike wonder and efficiency. Whether dressed up in full band regalia or stripped down to voice and guitar, this 23-year-old artist burns hot ... red hot. You see, she's always had a thing for Little Red Riding Hood.

Cervini stopped by the City Newspaper offices on her way to grandma's house to discuss her start, turning tragedy around, and living in a fairy tale. An edited transcript of the interview follows.

City: How did you get your start?

Kaylin Cervini: I started writing when I was 17, because my cousin was shot and killed. He was my best friend at the time.

So his death lit the spark to begin?

Well, I had always sung and was learning to play the guitar at the time actually.

How did you turn this tragic event around musically?

A teacher of mine turned me on to the Japanese saying, "We must embrace pain and burn it as fuel for our journey." And for some reason the quote just inspired me immediately after my cousin's death. It inspired my first song, "Burn It Up."

If this tragedy hadn't befallen you, would you still have taken a musical path?

I'd like to think that I would have. But I can definitely tell you I don't know who I'd be today if it weren't for that situation.

So what did you first write about?

A lot of my songs had to do with death and how to cope with it. And I started giving speeches on the topic at schools like MCC and Hilton High School, using music as part of the presentation.

What did you impart on these students?

The worst thing that happens to you has the power to be the best thing to happen to you. It's what you take from it.

Did you ever feel as if you were perpetuating the sadness or was this a sort of therapy for you?

It's a way of dealing with it ... at least it was at first. If you try to forget about the bad things they only get you later and you're not going to grow from it.

In writing around fairy tales what has remained of your earlier compositions?

I still write about finding light in the darkness. I go back to that whole magical idea. People tell me my head is in the clouds, I'm living in a fairy tale. When you're a kid and you hear all those stories, anything is possible. That's the mentality I like to live by because: one, you can turn bad into good, and two, I want to be a musician, I want to sing. So for me to live in any other world but a fairy tale, I wouldn't get anywhere. I have to believe that anything's possible.

Some of my music has a darker feel to it, but it's not bluntly obvious.

What's a fairy tale you identify with?

I've always had a thing with Little Red Riding Hood. She represents innocence, but innocence taken away.

What's next for Little Red ... I mean Kaylin Cervini?

I'm working on a new CD and would like to go on tour. But that's rather expensive. I need to get some money together.

Or a fairy godmother?

What I need is a big pumpkin and a fairy godmother to turn it into a big carriage to take me on my way.