'Get Back': the magic of The Beatles

December 08, 2021
It was, as Andy Babiuk recalls, “this ginormous place with everything.”

Babiuk, of Rochester’s garage-rock leaders, The Chesterfield Kings, was doing research for his book, “Beatles Gear.” He found himself in a huge but otherwise nondescript warehouse — not far from London’s Heathrow Airport — that housed a massive compendium of equipment used by The Beatles.

And under this one roof, Babiuk says, “I saw stuff that would just shatter your head.”

That was the late 1990s. Now “The Beatles: Get Back,” the three-part documentary on the streaming service Disney+, is presenting the same kind of hold-onto-your-craniums event for anyone who remembers the oversized role this band played in 1960s culture. And anyone who still celebrates the band’s significance to this day.

“The Beatles: Get Back” is eight priceless hours of insight into the creative process of a great band.

It’s a documentary series that got its start with what was hidden away in that ginormous warehouse.

“That’s the same place where all that film was stored,” Babiuk says. “All those film reels were there.

“But they had never been touched. And they’d never been looked at. It was only until recently that they realized they were sitting on a treasure trove. And they didn’t even know what condition this stuff was in.”

Babiuk had already established himself as a rock and roll archaeologist with organizations such as the Rock & Roll Hall of Fame and Museum in Cleveland. Auctions hired him to authenticate Beatles items. He later co-authored another similarly obsessed book on The Rolling Stones, “Stones Gear,” with his former bandmate, Greg Prevost.

But in that warehouse outside of Heathrow, with a camera to document what he’d find, Babiuk had been given permission by Ringo Starr to sort through his old drum kits — and by comparing old photos with each piece and its distinctive patterns, reassemble those scattered pieces for history’s sake.

When Babiuk met with Starr to explain what he’d found, and showed him photos of the now-complete drum kits, the iconic drummer had forgotten much of it.

“‘I had seven drumheads that said, The Beatles?’”

Crazy. That lunch meeting with Starr, Babiuk says, was “surreal.” Starr repaid the craziness by recording a drum track for The Empty Hearts, the group in which Babiuk plays bass with Wally Palmar of The Romantics, Elliot Easton of The Cars, and Clem Burke of Blondie.

And sitting in his Fairport recording studio recently, Babiuk says there’s more in the works on this Beatles front. Then he catches himself: He’s signed a non-disclosure agreement. “I’ll leave it at that.”

So we’ll work with what we have now. What “The Beatles: Get Back” does for us is pretty much what Babiuk did for Starr: Reassemble the flight of a meteor passing high over our heads.

And a lot happened in that brief arc of time, early 1969. Too much. “I’ve asked Ringo stuff, they just don’t remember,” Babiuk says. “You know Paul’s famous quote is, you ask him something about gear, ‘What kind of strings did you use?’ ‘Long, shiny ones.’ He doesn’t know what kind. He doesn’t care.”
“The Beatles: Get Back” is actually a do-over of the 1970 documentary “Let It Be.” Right down to the famous rooftop concert. Because all seem to agree: The music that became the album “Let It Be” is wonderful, but the film is “a real drag,” Babiuk says. “It’s depressing to watch, really.”

“Peter Jackson, who did ‘Lord of the Rings,’” Babiuk says. “He’s obsessed, like, he’s an obsessed filmmaker. Anybody who’s a fan of ‘Lord of the Rings’ stuff, there’s the film that got released, and then there’s Peter Jackson’s version. And when you buy the DVD or Blue Ray set or some box set, you don’t get the two-hour film. You get the, like, the four-hour film.”

Jackson is such a Beatles fan that, during the filming of “The Lord of the Rings” trilogy, he named the cameras after The Beatles, Babiuk says. “‘That’s the Paul camera, that’s the John camera, Ringo camera, move in a little bit...’”

So Jackson said, “Pick me! Pick me!” for the Beatles project. And the two surviving Beatles, Starr and Paul McCartney, did just that.

“I think Peter Jackson did a marvelous job, absolutely superb,” Babiuk says. “And the quality of the footage is mind-blowing. It’s as if it got shot, like, today.”

True to his “Lord of the Rings” excess, Jackson’s original cut for “The Beatles: Get Back” was reportedly 18 hours long.

His best move was to let The Beatles themselves tell the story. There is no narrator. No outsider analysis. Just an occasional line or two of type explaining what day it is, where they are, and maybe filling in a small gap when no camera was present.

“I’ve done that, where I’m a fly in the wall at things that are like, really important,” Babiuk says. “And like, I’m like watching a rehearsal by the Stones or something.”

And here, Jackson is the fly on the wall. “He actually did it for every viewer all over the world,” Babiuk says, “just to watch it, which is amazing.”

As significant as their later solo careers would be, The Beatles were stronger as a whole.

The story of The Beatles is a complex one. As their fame escalated, there were many dynamics at work, tearing at the seams. In “The Beatles: Get Back,” we see George Harrison’s growing frustration over not sharing in the same collaborative opportunities that McCartney and John Lennon enjoy. There is a hint that Starr may be distracted by his role in “The Magic Christian,” a film starring Peter Sellers that would be released later in the year.

And Lennon seems to have allowed McCartney to assume control of the band. Maybe it’s because of Yoko Ono.

But despite the popular legend, Ono doesn’t seem to be tearing the band apart. She’s just sitting next to her husband, doing cross-stitch or reading newspapers. “She was very helpful on ‘Beatles Gear,’” Babiuk says. “She had nothing to do with them breaking up.”

Perhaps it’s what’s left unsaid in the documentary, that Lennon has drifted into a heroin cloud. McCartney seems to understand that it’s been left up to him to make this new music a reality. And when he pulls Lennon into the music, Lennon becomes fully engaged.

So sure, there’s tension. That’s what “Let it Be” gave us. But “The Beatles: Get Back” tells a larger story. The four Beatles truly like each other. Right to the end.

“OK, there’s arguments in here,” Babiuk says. “Every band argues, I don’t care if you’re a bar band playing at the local Stumblin’ Inn, or if you’re playing Madison Square Garden. All bands do that. It’s the creative process.”

Sometimes that creative process kills. Babiuk saw that with the disintegration of The Chesterfield Kings. But as the end drew near for The Beatles, “They were just being a band,” he says. “As a matter of fact, they’re having a great time.”

Babiuk says he had a revelation about The Beatles after completing “Beatles Gear”: It’s not fairy dust that allowed The Beatles to happen. It’s not a case of “there had to be something no one knows about.”

What we are actually witnessing in “The Beatles: Get Back” is evolution of craft at the hands of four amazing musicians.

“I think I’m more blown away, that, how they could just get in a room and create music out of thin air,” Babiuk says, pointing to a specific scene that starts with McCartney. “You see them messing around with ‘Get Back,’ he obviously had an idea in his head, he’s not even playing a guitar. He’s playing chords on a bass, and the other two guys are looking at him, they’re waiting for John, and he’s conjuring up a song in his head. And next thing you know…”

They’re sliding into a song.

“It’s like, wow, that’s the magic of any good band,” Babiuk says. “You get an idea, somebody gets an idea, you start throwing it around, the next thing you know it turns into an actual thing.” 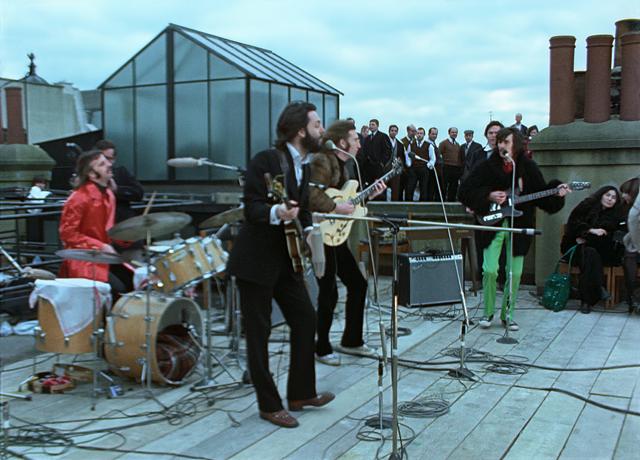 As “The Beatles: Get Back” unfolds, we see these four men never lose their sense of humor or playfulness. We see Starr mugging for the camera and McCartney and Lennon singing in goofy voices. We see the songs evolve out of guitar chords and made-up words, because they know the real words will later magically appear. We see The Beatles never truly rehearse for that famous rooftop concert, because they know they can just wing it. And they get away with it.

By then, The Beatles were a sprawling entertainment corporation. But they played it like they were the same four guys they were in 1962.

“I think their whole career was flying off the seat of their pants,” Babiuk says. “And whatever they felt. But in all reality, that’s the real, true sense of an artist. They never really plan anything. It’s a feel.”

Music Features The Beatles Get Back Andy Babiuk music documentary