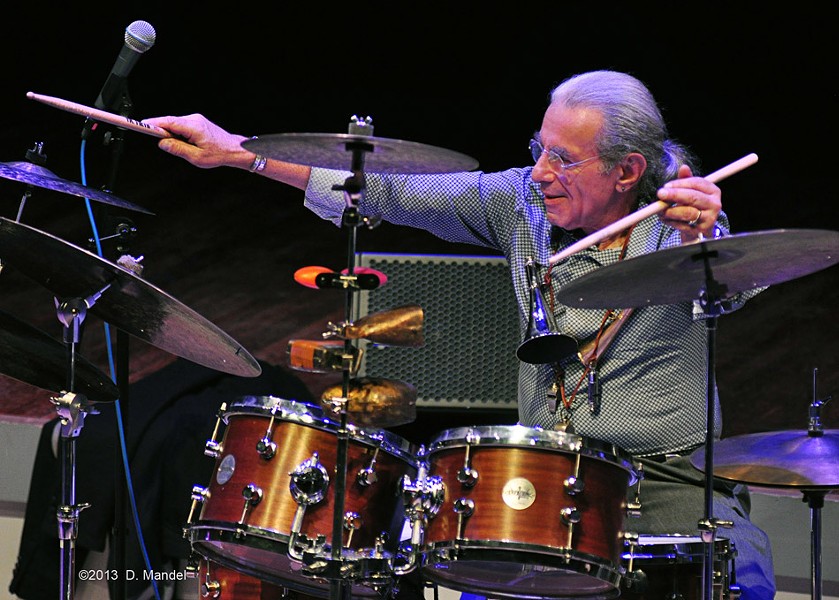 When Barry Altschul takes one of his epic drum solos, he concentrates with all his might on...nothing. "If you think," says Altschul, "you're late. You have to trust your musicality."

Altschul has trusted his musicality in collaborations with many of the greatest artists in jazz. He'll bring his current trio to Lovin' Cup Sunday.

Altschul grew up in the South Bronx, the son of a Russian Jewish laborer who did construction and drove a taxi. In the 1950's, he says, the neighborhood was a melting pot. "A block or two was African-American, go another block or two and you're in Latino land, and another couple of blocks it was Jewish and Italian," says Altschul. "Everybody hung out with everybody and there was a great music scene going on."

That scene centered around jam sessions at the home of pianist Elmo Hope. "Donald Byrd, Junior Cook — all these people lived in the neighborhood," says Altschul. "[Thelonious] Monk came up a lot, Art Blakey, Jimmy Cobb, Philly Joe [Jones] — they were all hanging at Elmo's house. I was very fortunate to be part of that at 16."

Altschul didn't begin on drums; he started playing piano at the age of 2. After his 9-year-old sister finished practicing, he would sit down and play the melodies she'd been playing. "Naturally my parents thought: prodigy! And fucked me up," says Altschul. He began formal lessons with his sister's teacher.

"I'm studying with this classical disciplinarian," Altschul says. "I'd ask her to play it for me once. I must have some sort of photographic ear. I never really learned how to read music because once she played it, I figured it out." That lasted until he was 5, old enough to rebel. He didn't touch a piano again until he was 16.

He took up clarinet and had been playing for two years when, at the age of 11, he saw a classmate with drumsticks in his back pocket. "I said, 'Hey, show me something.' It intrigued me," says Altschul. "I bought a set of sticks and a set of brushes. I got some fruitcake cans and started practicing." He took lessons for 50 cents at the nearby Bronx House. By 18 he was studying with one of the top drummers in jazz: Charlie Persip.

Back in the late 1950's and early 1960's, most of the jazz musicians he played with were African American; Altchul was white and Jewish. Did he get any flack?

"From the neighborhood people, there was a little static there, but not from the musicians," says Altschul. "Somehow, when I was 16, I was embraced by Elmo Hope, Art Blakey, and Philly Joe Jones. Blakey showed me some secrets — he said he only passed them on to those who deserved it." Altschul says they involved approaches and ways to overcome weaknesses.

In 1964 Altschul was working as a janitor at Mira Sound, a recording studio used by Phil Spector, when pianist Paul Bley gave him his first break. "Bley and I had a couple of conversations and one day, out of the blue, he called me up for a gig," Altschul says. "He had never heard me play. He said, 'Do you want to play standards or what I'm into?' I was an arrogant kid, I said play what you want. I just jumped in and reacted."

That question — standards or more adventurous music — sums up Altschul's career. Though he's known for his work in free jazz, with artists like Muhal Richard Abrams and Anthony Davis, he's played plenty of straight-ahead with Hampton Hawes, Kenny Drew, and others.

"I never listened to anything free to this day," says Altschul. "I listened to mainly bebop and hard-bop music." His influences include Gene Krupa, Kenny Clarke, Blakey, Philly Joe Jones, Elvin Jones, and Tony Williams.

Still, just as he was starting his career, "There was a musical revolution going on," says Altschul. "It was to expand the vocabulary. There were bar lines in the tune; let's eliminate the bar lines. It was very creative, very innovative."

Altschul, who recently released "The 3Dom Factor," his first album as a leader in 28 years, has often been described using the words of another drummer, Beaver Harris: he plays everything "from Ragtime to no time." "That's what the music calls for," says Altschul. "You create an atmosphere, a cushion for people to lean on while they're soloing, but you can participate in the conversation. What I'm playing is an extension of bebop. I don't consider myself an avant-garde player."

But it's tough to shake that reputation. When he played with Art Pepper, a critic wrote, "the surprise of the evening was avant-gardist Barry Altschul swinging his ass off."

He's traversed both worlds. In the early 1970's Altschul was part of Circle with Chick Corea, Dave Holland, Anthony Braxton. "To be able to play with musicians of that level brings your own level up," he says.

From 1983 to 1993 Altschul lived in Europe. On his second day in Paris he was invited to a party full of expatriate musicians: Steve Lacy, George Lewis, Mal Waldron, Dexter Gordon, Johnny Griffin, and Kenny Clarke. "Someone said to me, 'You don't know what it's like to be a professional musician.' I didn't know what that meant, but in six months I was booked for two years."

That work included directing a big band for the French government and touring Africa, the Middle East, and behind the Iron Curtain as a goodwill ambassador for the United States.

When he came home he received some strange greetings. Altschul recalls, "Jaco Pastorius ran across the street and lifted me up. He said, 'I thought you were dead!'"

In recent years Altschul has played with high-energy artists like the late violinist Billy Bang. At Lovin' Cup his trio will include long-term collaborator Joe Fonda on bass and Thelonious Monk Competition winner Jon Irabagon on saxophone. No matter the setting, Altschul spares no energy in a performance. "If you're not drenched, you haven't really done it."