The artist of Highland Park 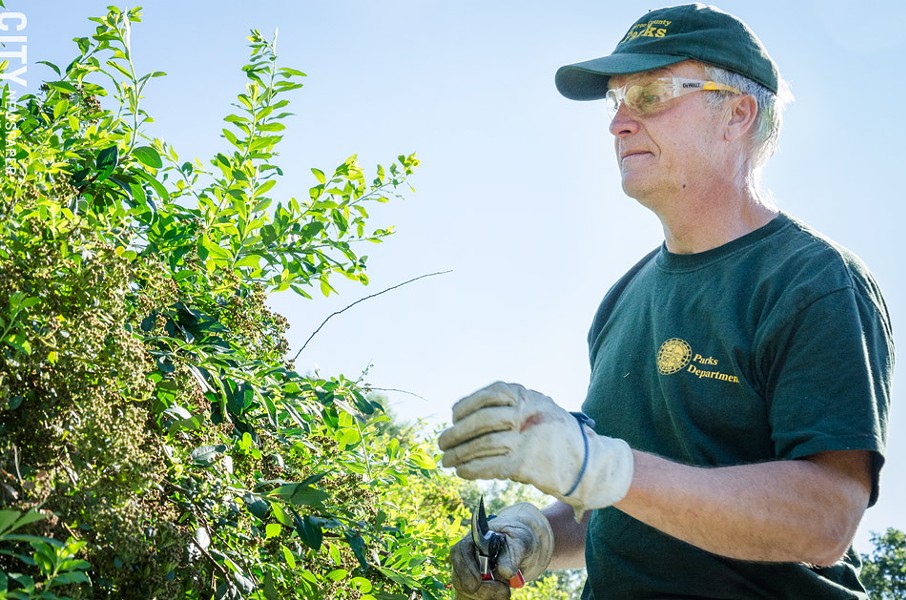 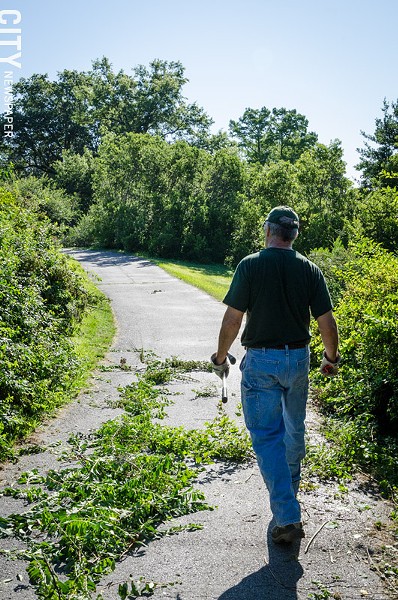 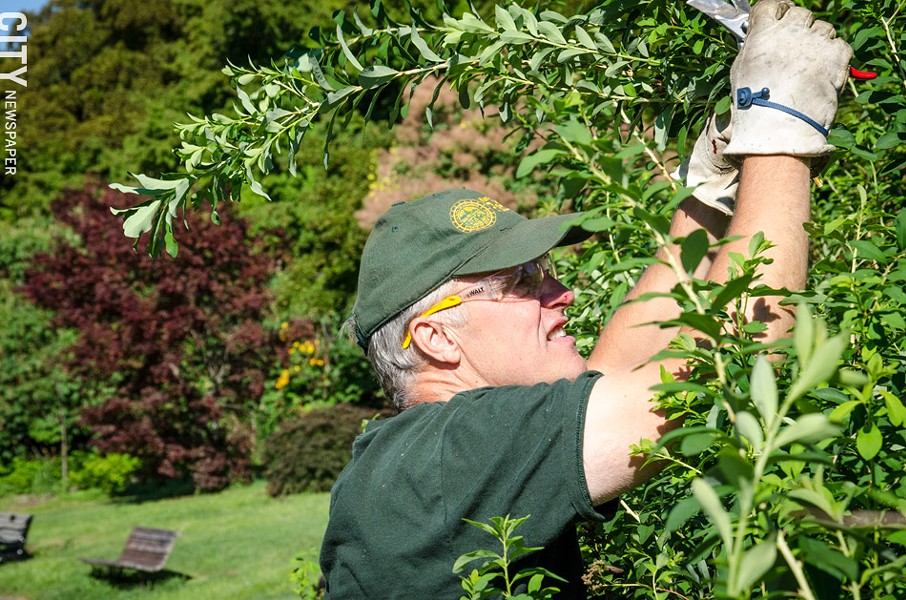 Driving a small green John Deere utility cart with its rear platform stocked with pruning shears, saws, shovels, and maybe an edger, Pollock patrols the park's 155 acres for trees and shrubs in need of seasonal maintenance or serious rehabilitation. During the last 18 months, Pollock has been on a mission to give the arboretum a much-needed and long overdue rejuvenation.

Highland Park is unquestionably one of Rochester's horticultural and historic jewels. While millions of dollars have been invested in improvements to the park's conservatory, reservoir, and walkways, it's the spectacular show of greenery that draws thousands of visitors and residents to Highland every year.

Though its care may seem incidental, even periphery, a combination of technical knowledge, design, and field experience is essential to keep this unique exhibit in good health, Pollock says. And that care was neglected for a while, he says.

"This is a collection," he says. "It's a lot like a collection of jewelry. The difference is that this is a living entity of trees and plants that require certain care."

Created in 1888 through an initial endowment of 20 acres to the city from nurserymen George Ellwanger and Patrick Barry, Highland was one of the country's earliest urban arboretums. It's one of several Rochester parks designed by legendary landscape architect Frederick Law Olmsted, and it is home to the city's biggest annual outdoor event, the Rochester Lilac Festival.

Much like Kodak, Xerox, and the Genesee River, the rose-to-purplish flowering sprigs have helped to define Rochester. More than 500,000 visitors from as far away as Canada and Pennsylvania stroll through the cloud of more than 1,200 heavily fragranced lilacs each May.

Pollock earned a degree in horticulture from Cornell and he has held positions at Cornell Cooperative Extension and in Monroe County's park system, including supervisory roles. But it's the field work — getting outdoors and working with the plants — that he says he enjoys most.

"It's one thing to learn about the insects and the damage they can do, the diseases, and soil conditions, but it's completely different to see how it is applied in the field," he says. "I especially like working with the older plants. There are some beautiful white oaks that have been here years."

Pollock is especially concerned about one of the park's oldest white oaks. It was recently struck by lightning, he says, and will likely die from the damage.

"It looks like somebody took a large can opener and lifted the bark open," he says. "It's a shame because you can't easily replace a tree that's been here for so long."

The park is intentionally maintained to look natural, Pollock says —picturesque, but not perfect.

And there are two important considerations that he says guide his work: the health and appearance of the individual trees and shrubs, and preserving the park's magnificent vistas.

When pruning a small tree, for instance, Pollock says he starts by cutting out all of the dead and broken branches. Then he removes the cross branches because when limbs overlap and rub against each other, they develop abrasions that expose the plant to disease and pests.

Next he focuses on the natural form: does the shrub open and fan toward the top? Or does it tend to grow irregularly with twists and turns? The edges of the walkways through the park are often lined with a trail of Pollock's cuttings and debris. Much of it is sent through a chipper and ultimately returned to the park as compost or mulch.

"Sometimes I like to take the plant almost down to the ground and let it produce [shoots], and eventually, I'll develop a new plant by working with one of those," he says.

Pollock recently worked on an autumn olive — a misnomer of sorts since the small tree is related to flowering cherries, he says. The tree was a ball of cross branches and switches, but Pollock carefully cleaned up the main stems. His cuts were smooth and almost seamlessly close to the stems, leaving the tree with an elegant canopy.

Pollock says he has to consider how the tree's structure will look in the spring when it's flowering as well as how it appears through the rest of the seasons.

The vistas are a different matter. Most people think that Olmsted left a precise plan with overriding jurisdiction concerning how the collection is arranged and where every tree and shrub is placed. What Olmsted did instead, Pollock says, was create vistas that act as scenes.

While Olmsted envisioned groupings of similar plants, he also expected future caretakers of the park to have their own interpretations of these arrangements, Pollock says. Maybe something new and different would be added to the viburnum collection, for example. Pollock has been adding Japanese and paperbark maples to various beds throughout the park to give some shade and protection to smaller shrubs.

But the vistas should be respected, Pollock says. Olmsted had specific scenes and moods he wanted visitors to experience when walking through the park. And they changed with the seasons. It's a complex quilt, Pollock says. Some are small and contained, and others open up to include the hills south of Rochester, almost extending the park for miles.

Pollock says he was lucky to enter the field of horticulture when he did, because there were more jobs in the field 20 to 30 years ago. He says that Highland Park would make an ideal companion to Monroe Community College's agricultural programs.

"It's my little soap box," he says. "This is perfect place to apply what you learn. Agriculture is three-quarters of the way to horticulture."

But he says he hopes that as green industry matures, that the demand for workers will increase.

"You probably won't get rich doing this kind of work, but you'll never have mental health problems, either," he says.