The Oscars will be handed out this Sunday, which means it's also time for that other prestigious and wildly-anticipated award ceremony: The Lubies!

Now entering their seventh year, The Lubies are CITY's rambunctious Oscar alternative, bestowing the highly sought after Golden Everything Burrito upon the films, performances, and trends that made the biggest impression over this past year. The Lubies are always a rowdy, lively affair, and I wouldn't have it any other way. So grab some complimentary tortilla chips, get another refill on your bottomless margaritas, and join us for the best celebration in town.

Making her U.S. film debut, the 75-year-old Chinese actress made audiences fall in love with her role as beloved grandmother Nai Nai in Lulu Wang's bittersweet, true-story family drama. The fact that the film was completely shut out of the Academy Awards is still absolutely mind-boggling.

The actor channeled his real-life pain to play his own father in this semi-autobiographical drama. Exploring that fraught father-son relationship and his own history with substance abuse, LaBeouf delivered a warts-and-all portrayal that still never lacked in empathy. 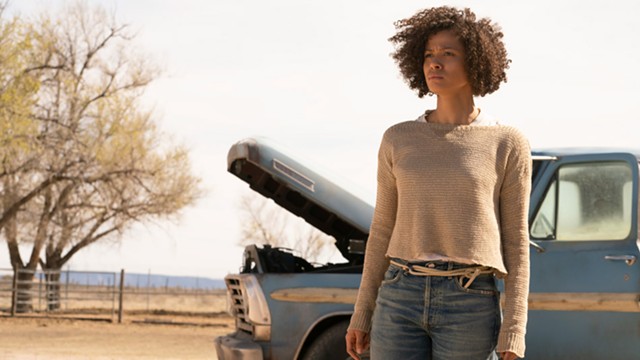 In her indelible dual role in Jordan Peele's twisty "Get Out" follow-up -- playing both frightened wife and mother Adelaide, and her murderous doppelgänger -- Nyong'o was so good it was scary.

Starring as Rudy Ray Moore, Murphy has never been more charming than his role as an aging comedian and actor grasping at his last chance for stardom. Plus, a bonus burrito to Da'Vine Joy Randolph, who absolutely lived up to her name with her wonderful supporting turn.

Every once in a while you see a performance in a film that's so offbeat and startlingly strange -- yet completely captivating -- it feels beamed in from another planet. That's exactly how I felt watching Fatma Mohamed's otherworldly work as a singularly bewitching saleswoman in Peter Strickland's deliciously weird homage to giallo and 1960s Euro-horror.

2019 was a banner year for Pugh, who was fantastic in three wildly different roles: first playing aspiring British professional wrestler Paige in the underrated comedy "Fighting With My Family," then as an American abroad suffering serious relationship troubles in Ari Aster's folk horror "Midsommar," before finding unexpected dimensions (and earning an Oscar nod) in role as spoiled sister Amy in Greta Gerwig's lovely "Little Women."

What can you say about a movie like "Cats"? Tom Hooper's jaw-droppingly misguided adaptation of Andrew Lloyd Webber's unadaptable musical was like watching a car accident in slow motion, and it was impossible to look away. So I can easily see it becoming the Jellicle Choice for a new generation of filmgoers looking for the next "Rocky Horror Picture Show," playing to enthusiastically rowdy crowds at late-night screenings for years to come.

There was one superhero drama released in 2019 that took me by complete surprise, featuring a powerhouse lead performance that found untapped emotional depths through a story about an unusual individual struggling to find their place in a harsh, unforgiving world. And it wasn't "Joker." A personal family drama combined with a super-powered origin story, Julia Hart's film flew so far under the radar it didn't even get a theatrical release locally.

I adore aquatic horror, that subset of scary movies that play upon our fears about what lies beneath the murky depths (see also: last month's "Underwater"). This past year we got two tightly-directed, stellar examples of the genre, each with an excellent, fiercely physical lead performance (from Kiersey Clemons and Kaya Scodelario, respectively).

Best Argument Against the Return of Smell-O-Vision: "The Lighthouse"

Between the fish, the mildewing wood, and Willem Defoe's flatulent wickie, the sights and sounds of Robert Eggers' wonderful horror flick were so pungent you could practically taste it. And really, I'd rather not. Bonus:

Best Song: "Glasgow (No Place Like Home)," from "Wild Rose"

Dammit Academy music branch, why can you never get this right? It seems that every year, Oscar voters leave the very best original song out in the cold, and that was once again the case. I can't stop listening to this toe-tapping track sung by Jessie Buckley, as a down-on-her-luck Scottish lass dreaming of becoming a country music star in Nashville.

In movies as varied as "Joker," "Parasite," and "Knives Out," it seemed that filmmakers were eager to work out their frustration with the ever-growing divide between society's haves and have-nots.

From the very first installment of the new "Star Wars" trilogy, fans were quick to note the sizzling chemistry between hot-shot pilot Poe Dameron (Oscar Isaac) and ex-stormtrooper Finn (John Boyega), enough so that many fully expected their relationship to turn romantic as the trilogy went on. Alas, that wasn't meant to be. According to Oscar Isaac, it wasn't for his lack of trying, as he was quick to tell anyone and everyone on his lengthy press tour preceding the release of "Rise of Skywalker," blaming "Disney overlords" for their lack of courage. You truly love to see it. Someone cast this man in the queer sci-fi adventure flick we all crave!