As devotees of the Lubies (all three of you -- Hi Mom! Hi Dad!) may recall, last year's ceremony got a little dicey when an unknown participant hurled one of the prestigious awards (the coveted Golden Everything Burrito) at a fellow attendee whom they believed unworthy of the award-season attention they'd been receiving. Your memory may be a little fuzzy as to the identity of that "victim," so I'll give you a hint: It rhymes with ShmaredSchmeto. Feelings were hurt and -- more tragically -- delicious Mexican food was wasted, but thankfully we've all moved on and grown as a result.

For the second year, Tinseltown's glitterati gathered at my apartment, stocked with only the finest boxed wine, and huddled in anticipation as I handed out a collection of edible trophies (golden statues are so passé) honoring the past year's films deemed worthy of recognition for their feats of cinematic excellence. Join me in recounting the night's glamorous proceedings. 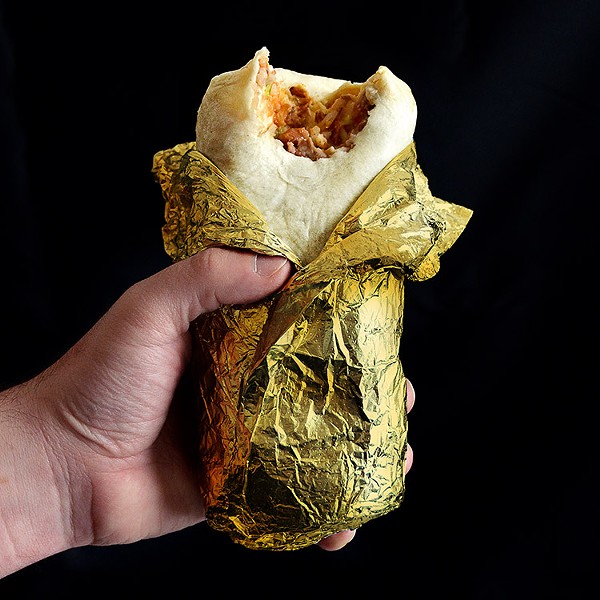 It's still frustrating to note that Russo's best role in years had to come from her own husband ("Nightcrawler" writer-director Dan Gilroy), but what a role it is. As the ambitious producer of a low-rated local news station, Russo is positively electric.

I had mixed feelings about Rob Marshall's lavish adaptation of Sondheim's musical fairy tale, but I'm over-the-moon for Pine's performance in it. He was delightfully smarmy as Cinderella's prince and absolutely nails his big musical number. I'd have killed to see what he could have done in a dual-role as the Big Bad Wolf (as the part is in most stage productions). Plus we'd have been spared yet another of Johnny Depp's recurring "look at me in a funny hat!" performances.

Mbatha-Raw gained attention for her impressive work in the period drama, "Belle," but she soars as a pop diva (even singing her own songs) who falls in love with the police officer assigned to protect her in Gina Prince-Bythewood's deliriously entertaining romantic drama.

The entirety of "Locke" takes place in a car, with Hardy as the only actor appearing onscreen. It sounds dreadfully dull, but the actor makes it riveting cinema. There aren't many actors who could have pulled that off, and that alone would be worthy of recognition, but Hardy turns contractor Ivan Locke into a fully-realized character.

I'd also like to honor David Oyelowo, who was shockingly and shamefully left off the Oscar's nomination list this year for his magnetic turn as Martin Luther King Jr. So I'm giving him a delicious taco bowl.

All Your Scenes Are Belong to Me: Jillian Bell, "22 Jump Street"

One of the year's more memorable scene-stealing turns belonged to Jillian Bell as the acid-tongued roommate of Jonah Hill's love interest in the rollickingly funny sequel to "21 Jump Street." An unstoppable comedic force, Bell wrestled control of the film away from her more famous co-stars.

Clearly, Adam Wingard and Simon Barrett's brand of pulpy horror-comedies just speak to me. Last year, I awarded the duo's previous film -- the home-invasion thriller "You're Next" -- a delicious burrito and this year I have to give props to this 1980's action throwback. But Stevens, best known for his role as Cousin Matthew on "Downton Abbey" is the obvious MVP. Without his icy charisma, the film wouldn't have worked nearly as well. 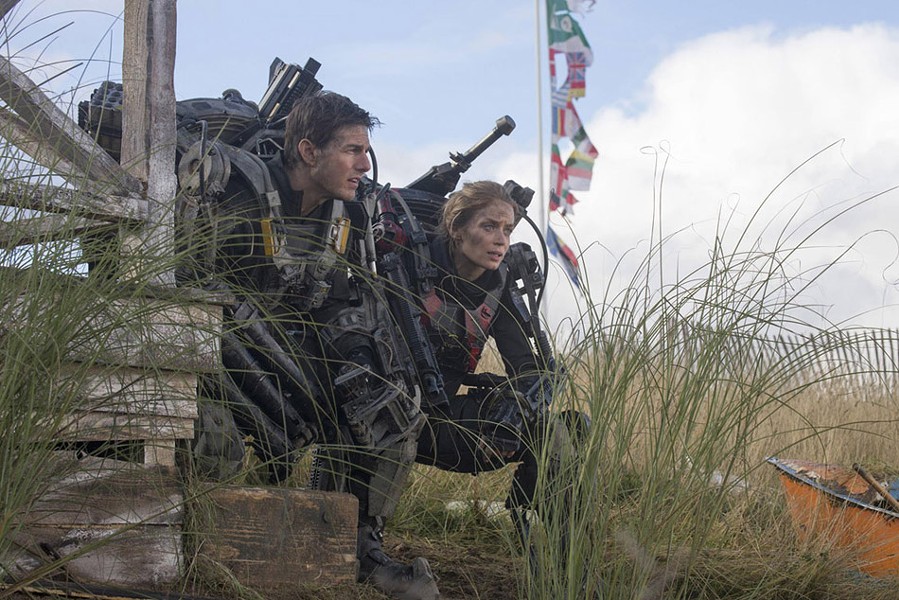 Brains and Brawn: "Edge of Tomorrow"

Doug Liman's time-jumping, sci-fi action flick provided the most euphoric thrills at the movie theater this year, proving that summer blockbusters don't necessarily have to be brain dead as well. Action done right.

Maybe Hollywood Doesn't Agree With You: Jack O'Connell, "Starred Up" and "Unbroken"

As a juvenile offender in the British indie jailhouse drama, "Starred Up," newcomer Jack O'Connell delivered a magnetic performance dripping with brooding menace. But given the heroic lead in Angelina Jolie's WWII epic, "Unbroken," he receded into the background, seemingly drained of all that charismatic promise. The actor has another performance coming in the thriller "'71" (which is scheduled for a Rochester release in March), so we'll have a definitive answer soon enough.

History Will Prove Me Right: "Noah"

Speaking generally, critics weren't kind to Darren Aronofsky's ambitious biblical epic. But his gritty tale of courage, sacrifice, and religious fervor combined great performances and gorgeous production design with just the right amount of nuttiness. The film is only going to grow in esteem over the years. Mark my words.

Fun For The Whole Family: "Pride"

This British import, based on the true story of the cooperative relationship between a community of striking miners and a small group of gay and lesbian activists, is mainstream entertainment at its finest. The film played at the ImageOut Film Festival (earning the festival's Audience Award for Best Narrative Feature) last October, and followed that up with a short run at The Little, but "Pride" deserves an even larger audience. It's a crowd-pleaser in the very best sense of the word.

I wasn't the biggest fan of Disney's revisionist, live-action take on "Sleeping Beauty's" popular villainess, but obviously I was the only one. Though it opened back in May, the film only just left Rochester theaters (Movies 10, but still) two weeks ago. Good riddance. 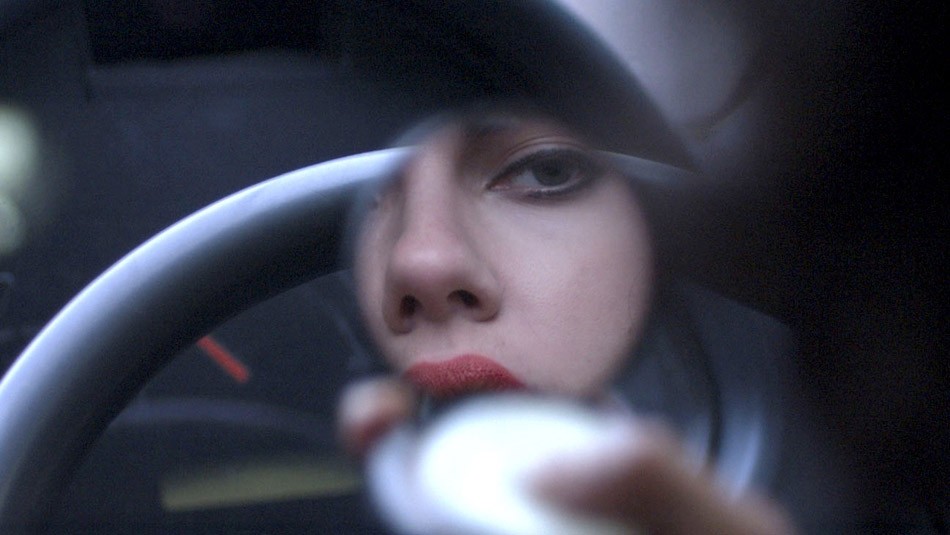 Best in Show: "Under the Skin"

Often weird, occasionally inscrutable, but always wonderful, this art-house sci-fi drama -- starring Scarlett Johansson as an alien creature on the prowl for male victims -- was possibly my favorite film released last year. A masterpiece of visual storytelling, the film is also a shockingly affecting story about lust, loneliness, and human nature.

Do I Even Need a Reason?: "Too Many Cooks"

The Academy has rules against awarding films that premiere on television, but thankfully there are no such guidelines (or any guidelines, really) for The Lubies. This surreal take on 1980's television opening titles premiered during Cartoon Network's Adult Swim block of programming, but it reaches such brilliant levels of lunacy that'd I'd forever regret not giving it some sort of distinction. Nothing else this year gave me such immediate pleasure, or held up to repeat viewings, as much as this short. It's been months since I last watched it, and that damn song is still in my head.