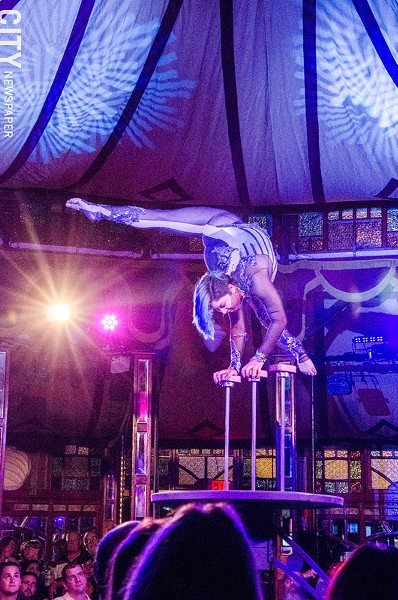 The sixth annual KeyBank Rochester Fringe Festival will host more than 500 performances in and around Rochester's downtown. The Fringe's official website is rochesterfringe.com, where you can find a full schedule of events, purchase tickets, and get the latest information. The Fringe also has a handy app available on Google Play and Apple App Stores.

The glitzy hub of the Fringe, One Fringe Place (corner of East Main and Gibbs Streets) houses the Spiegeltent and Spiegelgarden, the Fringe box office and information booth, ATMs, food trucks, and several shows throughout the event.

The Spiegelgarden will host the site-specific shows "Bushwhacked: Crystal Magic Wonder Cabinet Palace Tent," "Dashboard Dramas IV," "Complimentary Heckling," "the space between," and the Storychick Rochester Storybooth as well as the Pedestrian Drive-In. This is also the hub for Fringe's new Farm to Fringe program.

Across the street is Kodak Hall at Eastman Theatre, where comedian John Mulaney will perform Friday, September 22, at 7 p.m. Tickets are already sold out. Next door, the Gospel Sunday program will take place in Kilbourn Hall (26 Gibbs Street) on Sunday, September 17, 2 p.m. Free and appropriate for all ages.

Part of that second weekend, the Fringe Street Beat dance competition is back — and with a cash prize of $1,500 for the team with the best moves. Saturday, September 23. Preliminary rounds start at noon; and finals run from 3 p.m. to 4:30 p.m. Free to watch and appropriate for all ages. If you want to compete, registration is now open at rochesterfringe.com and costs $5 per team.

Some locations host several venues, so be sure to check show information for specifics

School of the Arts 45 Prince Street

Fringe shows are separately ticketed and prices vary from program to program. All tickets can be purchased online at rochesterfringe.com; by phone at 957-9837; in person at all Fringe venues starting one hour prior to the performance; and in person at the Fringe Box Office in One Fringe Place. Many performances will fill up quick, so it's recommended you buy tickets in advance.

There are also around 150 free shows at this year's Fringe, including Friday and Saturday on the Fringe at Parcel 5, and performances on Gibbs Street during the second weekend. To explore the free performances, go to rochesterfringe.com, click "Find a show," and look for the "Only free shows" filter option.

Convenient parking for the East End venues can be found in the East End parking garage at the corner of Scio Street and East Avenue. Additional parking can be found in the Washington Square Garage (111 Woodbury Boulevard), Court Street Garage (194 Court Street), Sister Cities Garage (28 North Fitzhugh Street), and One HSBC Plaza (100 Chestnut Street). Daily parking at each of these locations costs $7 per car. Also be on the lookout for street parking or spots in surface lots throughout the neighborhood.

The Fringe is a pedestrian and bike-friendly event. There will be plenty of bike parking at One Fringe Place.

Keep up with CITY

Each day, CITY's critics will offer up reviews and photos of the previous night's performances, and you can post your own thoughts in the comments section. New blogs will be up by 7 a.m. each morning of the festival. We'll also post updates on our Facebook page (facebook.com/CITYNewspaper), on Twitter (@roccitynews), and on Instagram (@roccitynews).

CITY will again host TriviaCITY during Fringe on Wednesday, September 20, at 7:30 p.m. in the Spiegelgarden. The trivia night will focus on arts and culture (with rounds specifically about Rochester and the Fringe), and is free. Appropriate for ages 18 and older. There is no sign-up, but teams cannot be larger than six people.

To let us know how your Fringe is going, use the hashtag #fringeCITY on social media.