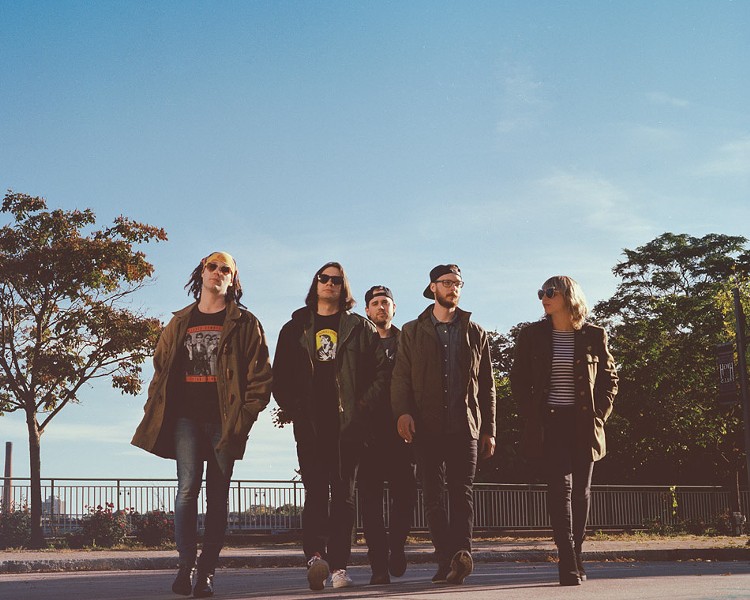 PHOTO BY KRIT UPRA The Demos puts its trust in the producer to make a bigger sound.

With Cordial Sins and The Stedwells

The Demos is truly a well-oiled, melody-driven, music machine. Mixing some Merseybeat with a little nice and poppy rock 'n' roll, the band is a sing-a-long personified. After releasing the Mikey James-produced EP "Paramount Clouds" in 2016, The Demos took a little downtime and went through some lineup changes.

"Now we're in full throttle mode, you could say," says lead singer Jason Milton. Along with Milton, The Demos includes Caela Moore on keys; Jeremiah O'Reilly, guitar; R.J. Papaleo, drums; and Callan Saunders, bass. In its little over 10-year history, The Demos has gone from quintet down to a duo and back to a quintet again. Its success is in how it holds on loosely to its songs and how they are created, allowing for outside influence to permeate and guide. We're talking outside influence like The Mercies' Mikey James. James works in layers of pristine orchestration with lo-fi leanings; it's salty and sweet.

"The thing I like about Mikey James is he's so eclectic," Milton says. "He brought a lot of stuff to the table that wasn't necessarily in our wheelhouse. He brought in a lot of aspects we weren't used to."

James's production added a new electric accessibility which boosted the sparkle, while The Demos' melodious flow tempered James with more organic sounds. So it's interesting what pairing The Demos is doing next in the studio: "We're in the studio now with Dan Armbruster," Milton says. "He's producing some tracks for us."

It's a collaborative collision between two opposing poles: the Joywave largess that Armbruster brings, bumping into The Demos' plaintive, harmony-soaked sound. The band is thrilled.

"It's good," says Callan Saunders. "It's nice to have this outside-input influence." But rest assured, The Demos are strong enough to maintain its own identity, even with all this influence flying around and the Joywave front man at the wheel.

"Something he said right off the bat," Milton says, "'You guys have to sound like you. You have to sound like The Demos.' Which was great because sometimes I think bands get caught in a situation where they're working with a producer and the producer puts on a little too much of his own flavor. But Dan likes us for who we are."

"We now have a lot of tools at our disposal," O'Reilly adds. "And a lot of resources. But it's also nice to have someone add their skills and their artistic eye. He's just a super-creative guy with out-of-the-box ideas."

There's a mutual trust between Armbruster and The Demos. They've known each other since playing in bands in their teens.

"But we have different musical interests," Milton says. "We thought we'd bring stuff to the table and that he'd never heard of. And he'd do the same. We're so close to these songs that we never know half the time."

It's beneficial to have an objective opinion that hasn't heard a particular song as many times as the song's writer has. Saunders says the collaboration between Armbruster and The Demos will yield an EP.

"The idea behind the EP," he says, "is to put new music out at a faster rate. We'd love to put out an album, but it's tough being independent and not having a ton of resources. We could save up all the songs we've written. But that might take a year."

The band says it's listening to a lot of different music now — more than it ever has — and consequently the range of influences is broader. And as the band would no doubt mature and grow over the span of that year, it would threaten the continuity between the older and younger tunes.

The Demos have already completed the Northeast leg of a sold-out tour opening for Joywave. Milton says the audience gets what the band is doing.

"Their fans are music people," he says. Music people that recognize a good song when they hear it, even when The Demos can't. Milton is stymied.

"You know what's funny?" he says. "I don't think you ever know if you have a good song — because I don't think that a song was that good when I wrote it. That's why it's cool to have a producer there to say, 'That's the song.'"