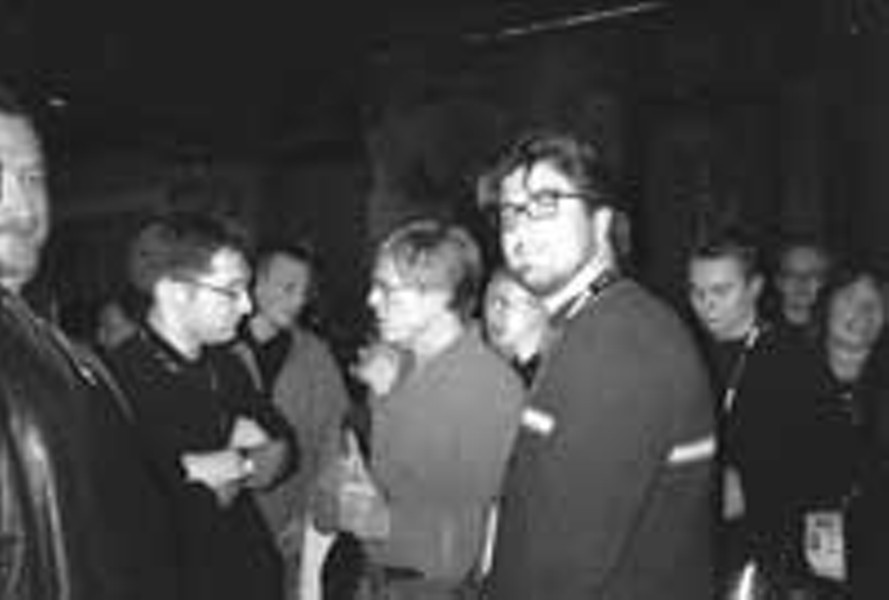 Bronwen Hughes Everyone wants a piece of the host: Matt Ehlers (right) waits while Michael Knowles chats with Robert Redford.

For the past three years, Rochester filmmaker Matthew Ehlers' short films have been selected to be part of the Sundance Film Festival. At the 2004 Festival, January 15 to 25, he was there promoting his most recent entry, a three-minute comedy called Who's Your Daddy? Ehlers kept a diary of his journey: 10 days filled with all the sleepless nights, free food, and schmoozing a young filmmaker can take.

I arrived in Utah and checked my messages. Turned out the people I was going to stay with did not rent a condo but decided to stay with friends, which means I might have to stay at the Chateau Après for 10 days. It sounds swanky, but the Après is a hole. For 30 bucks a night you get one half of a bunk bed in a room with 20 other guys. Hooray for Hollywood.

I met a British producer named Michael Knowles, who was also stuck at the Après. We hit the main street of Park City in search of food and beer.

I got no sleep. Mike offered to let me stay at a hotel with him and two filmmakers from New York. Thank God.

This morning I saw a feature called Primer, a low-budget science-fiction film about time travel. Some people were turned off by the overlapping scientific jargon, but I'm glad the filmmakers didn't dumb down the dialogue for the audience. It reminded me of Darren Aronofsky's Pi. Primer wound up winning the Dramatic Grand Jury Prize.

Later, Mike and I ended up at the Appaloosa Saloon, a true country joint. A cover band played Alabama. A double-jointed local showed everyone how he could point his toes 180 degrees backwards. It felt like I walked onto a David Lynch set.

Every year Sundance hosts a brunch with our host, Robert Redford. For two years I watched him give an inspiring speech and then get mobbed by overanxious filmmakers. I felt like a crying teenager trying in vain to get a glimpse of The Beatles.

This year? Pay dirt. A wonderful Sundance staffer named Virginia helped me out. I shook Mr. Redford's hand and Mike snapped a picture. Ah, I reached the pinnacle of Sundance schmoozing and name-dropping.

I then had this incredible dinner, compliments of American Express. All I had to do was talk to platinum-card members who were there to meet honest-to-God filmmakers.

Then things got downright silly. While I stood with a friend waiting to get into a premiere party, I saw someone I know who got me into the Sky Vodka Lounge next door. Lance from 'N Sync was across the bar from me. (I thought he was in space?) I hung out with a bartender named Jessica. She was disappointed that it was the 'N Sync party, not the Marilyn Manson party. She hates the former but worships the later. It was a sobering walk back to the hotel. I felt dirty.

The love of cheese

I attended a party for my alumni, USC Cinema. Film-school grads are so full of enthusiasm. "Did you hear about the USC grad who got a three-picture deal?" "I'm going to the William Morris party, sorry I can't get you in." Yuck. I caught up with my friend Amotz Zakai. He went to RIT then USC and is now a respected producer in Los Angeles. We had some Brie and got out of there. Oh, for the love of cheese.

New Yawk in the house

I visited Jerry Steoffhaas of the New York State Film Office. When he lived in Rochester, Jerry formed the Rochester Film Office. At Park City, he took over a storefront to promote shooting films in New York. They overnighted real NYC bagels. I told Jerry I was directing a short film in NYC this February. "Hey, I'm doing my part. Gimme a bagel!"

Mike got me into a Variety party. Time for some serious schmoozing. "Well, I'm filming this and I'm writing that. Yeah, I'm super. Here's my card. Anyway, back to me." I know: It's disgusting.

I had a ton of meetings. Meetings for most professions usually accomplish something, but not in the film world. I go to some restaurant and give industry people my pitch. They seem to love it but then I never hear from them again. At least they pick up the bill.

My hotel roommates left, so I (gulp) headed back to the Chateau Après. I bought earplugs.

I saw a movie called Stander. It's about a South African bank robber who was once a police captain. The story was great, the action was intense, and the cast was fantastic. Director Bronwen Hughes was able to bring out the sensational (but true) stories of Andre Stander's life without shying away from the disturbing aspects of life under South African apartheid.

The Appaloosa Saloon was empty and sad, and I was too tired to go to another party or take another meeting. I went to my bunk bed early.

I am a zombie. I had more meetings and fell asleep on a couch. The festival was winding down. I decided to go home a day early.

Before I left, I saw a documentary called DIG! The film followed two bands for seven years: The Dandy Warhols and The Brian Jonestown Massacre. The former finds success while the latter always self-destructs. The film ponders the debates of art versus commerce, selling out versus buying in, and genius versus madness. DIG! became the surprise (but deserving) winner of the Best Documentary Feature.

I went to the headquarters to say goodbye and thank the staff. I hoped they would say, "Don't go. Stay for the awards ceremony! You'll be glad you did, wink, wink." But they didn't. No worries: Just getting in is reward enough. Next year, come hell or high water, I'll be there with a feature.

Matt is currently fundraising for his first feature, which he hopes to film in Rochester this summer. See Matt's work and join his mailing list at www.eggwork.com; See Who's Your Daddy? at Sundance's online festival, www.sundance.org.