At a news conference Friday afternoon, some two dozen women pledged to stand with Sinclair and called on Flagler-Mitchell to resign. Among them were the Rev. Myra Brown of Spiritus Christi Church, former city school board president Shirley Thompson, and former Director of community engagement for the Mental Health Association Melanie Funchess, who is now president of Ubuntu Village Works.

“LaKaya, the women here standing behind me want you to know that we’re tremendously sorry for what Ernest Flagler-Mitchell put you through,” Thompson said. “We’re sorry, but more than that we’re shocked, we’re disgusted, and we are angry.” Coming together under the banner of “Team LaKaya,” the group’s members said they want to provide support for women who have claimed to have been harassed by Flagler-Mitchell or any men in local government.

“Whenever that engagement has happened, it is important for our elected officials and leaders to understand that the power relationship is not equal,” Brown said. “And because the power relationship is not equal, the onus is then on the person who holds the maximum level of power to monitor themselves, to make sure they are the ones upholding integrity and public trust.”

In response to the allegations by Sinclair and other women against Flagler-Mitchell, officials in local, county, state, and federal offices have called on him to resign. Among them are the Legislature’s Democratic Caucus, the Legislature’s Republican Caucus, and County Executive Adam Bello.

Sinclair met Flagler-Mitchell during a vigil that followed a September mass shooting at her Pennsylvania Avenue home. In November, Flagler-Mitchell messaged Sinclair, who is a photographer, stating that he had a project for her. He then sent her a photo of a man’s genitals. Flagler-Mitchell has apologized, stated that the genitals pictured weren’t his, and claimed the message was meant for his wife. 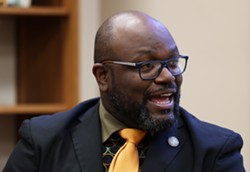 The District Attorney’s Office investigated Sinclair’s complaint but did not charge Flagler-Mitchell with any crimes. In their report, investigators said that Flagler-Mitchell used his standing as a county legislator, a pastor, and a retired firefighter to “continually seek out women on social media platforms” to engage in “sexually related topics.”

Investigators spoke with 11 women who described having varying experiences with Flagler-Mitchell, from consensual sexual relationships to unwanted solicitations.

In June, a woman filed a separate complaint with the state Division of Human Rights, alleging that Flagler-Mitchell had propositioned her multiple times, including at his office in the Monroe County Office Building, as she sought his help with a Child Protective Services issue.

Mayor Lovely Warren, who like Flagler-Mitchell shared a close relationship with the late Assemblyman David Gantt, has not publicly commented on the allegations against him.

When asked if there was any response to Warren’s silence on the issue, member of Team LaKaya Iris Bannister said the group speaks for all Black women in Rochester.

“When one of us speaks, we speak for everybody,” Bannister said. “Once you become aware, and once you see the reality of the dangerous way this affects people, you can’t sit on the sideline. So we’re speaking for the mayor, and we’re saying she’s a Black woman, so she’s with us.”