'FourMats' exhibit at the MAG tinkers with time 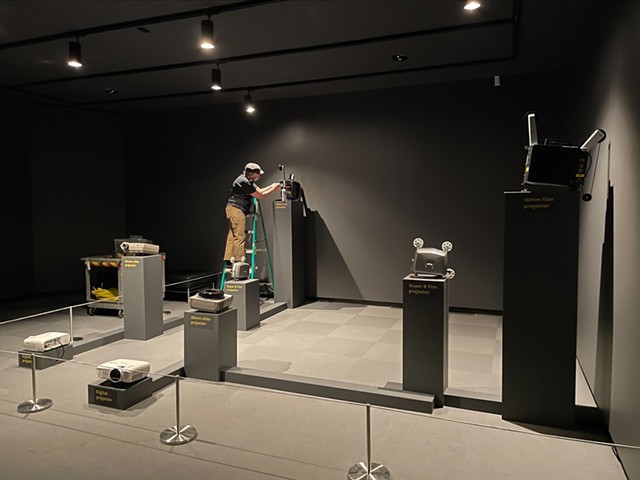 The room in the Memorial Art Gallery where Tara Merenda Nelson’s film and video installations are screening is silent except for the whirring and clicking of machines.

The devices — projectors for 16mm, Super 8, and slide film, as well as high-definition video — are in fact part of the show; each carefully positioned for their projections to align with one another to form a single image.

“FourMats,” on view through Aug. 8, features two of Nelson’s multimedia works. “End of Empire” is a tall moving image of the Kodak Tower, with each projection stacked up to form a picture of the iconic building. In “Moon,” each projection is a quarter of the full moon.

Aligned in this way, the stark visual differences between the projections — including vibrancy of color, clarity of details, and steadiness of the picture — are obvious. The effect leaves viewers feeling as though they’re seeing the object through four different periods of time simultaneously.

The key word here is “feeling.” Nelson’s work is more than a simple demonstration of the progression of film and video technology. It explores the effect the technology’s nuances have on us: how we perceive light and how we organize visuals to make deeper associations with what we are seeing. 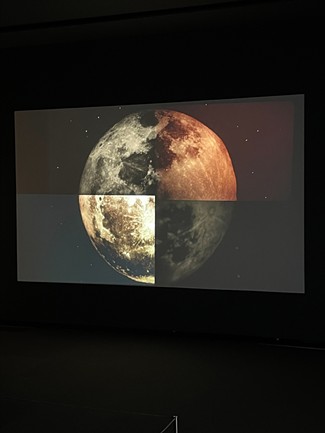 In this case, the look of each kind of film or video is inextricably linked to the periods of time those technologies were popular, giving rise to connections we have, or think we should have, with those days.

“This is based on the Gestalt principle of organization,” Nelson said as she changed out film loops recently in preparation for the next “performance” of the installation.

Gestalt principles are about how we interpret visuals from the world around us to create a full picture, and comprehend what we’re seeing.

Super 8 film projects at 18 frames per second, compared with 16mm film, which generally runs 24 frames per second. While the HD video records movement, it doesn't pulse and flicker like film. The slide, on the other hand, is a constant still image.

Nelson, the curator of moving image collections at Visual Studies Workshop, said in her artist statement that she sought to identify how people perceive images and give them meaning. Her work focuses on how that perception is affected by the light that conveys the image and the darkness between the frames, which she calls “the space of imagination.”

At the time she made the recordings (“End of Empire” in 2014 and “Moon” in 2015), Nelson said, she was wrapped up in understanding abstraction and the organization of visual information.

“But I was also interested in film and film projection,” Nelson said, adding that, as a filmmaker specializing in Super 8, she was struck by how people reported a feeling of nostalgia when they viewed Super 8 films, even when it was their first time seeing one.

“Why would you feel nostalgic?” she asked. “What are you feeling nostalgic for if this is an experience you’ve never had?”

The answer, perhaps, is in the association we have with the look of older technologies and our cultural knowledge of when and how they were used. Something filmed today on Super 8 can be mistaken for a home movie from the 1960s because of the color, clarity, and number of frames per second that our brains automatically read as older tech.

Which is why Nelson’s portrait of the Kodak building, using four formats shot in 2014, seems to jump several decades as your eyes move down the tower. It is also why snapshots taken today on a refurbished Polaroid camera can “feel” vintage.

With the moon portrait, the visual differences between the four quadrants are fairly straightforward. Though each slice of the moon is in grayscale, some wedges are brighter than others, some details are more crisp, and, in the case of the slide film, the image is warmer. 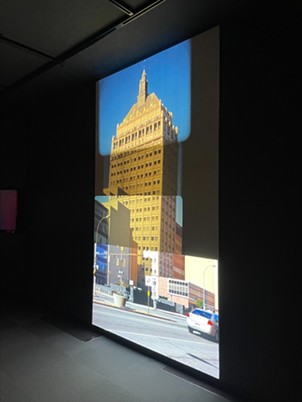 But the Kodak Tower, projected in horizontal strips from the peak of the roof down to the base of the building at street level, has more immediate associations with the time periods of each kind of film or video.

The oldest type of film projected — 16mm, invented by Eastman Kodak in 1923 — shows the highest tier, which includes the top of the tower and the sky in a breathtaking blue. The image is a bit fuzzy and wobbles slightly as it cycles through its loop.

Moving down a tier to the Super 8 — debuted by Eastman Kodak at the 1964 New York World’s Fair — the image is dimmer and noticeably flickers. Below that, the slide film — circa 1935 — is a steady image, but fuzzy by today’s standards. At the street level is the HD video: bright and crisp, with no jumps or flickering. Cars whiz by, people pass into and out of the frame, and modern traffic lights and current buildings surround the base of the tower.

The lineup of formats works well in this order. Isolated in the blue sky, the top of the tower, which was built in 1914, looks as though it could have been shot when 16mm film was new. The new buildings, traffic, and stop lights at the base were appropriately recorded with modern video technology.

Almudena Escobar López, the assistant curator of media arts at the MAG, explained that the installation was originally a performance piece that was adapted into a longer-run exhibition. But a caveat of the projections is that their quality erodes with every “performance,” like a vinyl record that is played over and over again.

“The film loops degrade each time that you activate the installation, and they don’t last for long each time,” Escobar López said.

Like memory, the projections fade with time and, eventually, will become unreliable and lost.

“We can relate, in a way,” Nelson said, “because that's something we're grappling with in the human condition.”

Included in the exhibition program is “The Expanded Cinema Practice of Tara Merenda Nelson” on July 29 at 6 p.m., an online conversation between Nelson and curator Almudena Escobar López about Nelson’s expanded cinema practice. For more information, visit mag.rochester.edu.