Why do we hate?

That's the very weighty, broad question framing an upcoming talk by Pardeep Kaleka, a Sikh leader from Milwaukee, and Arno Michaelis, one of the founders of a notorious Midwestern white power skinhead gang who's spent the past decade-plus speaking out against racism and hatred.

Kaleka's father, a highly-respected Sikh leader in Milwaukee, was killed in an August 5, 2012, attack on the Sikh Temple of Wisconsin. The shooter was a member of the gang Michaelis founded. 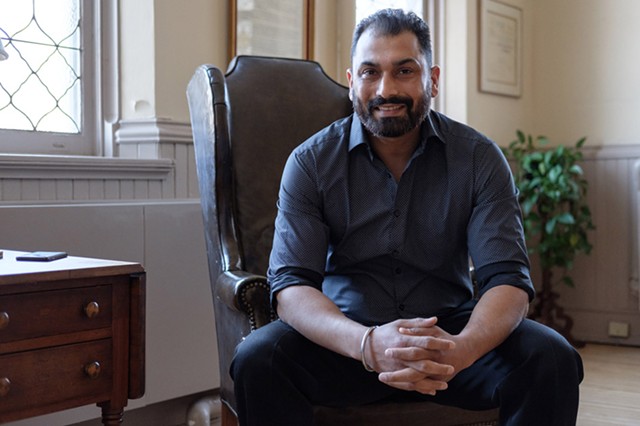 The pair will highlight the idea that people who have been hurt sometimes, in turn, hurt other people, Kaleka said. They'll talk about "both individually and as a community, how we heal from the hurt that we either have gone through or inflicted onto the world," he said.

The event, "Why Do We Hate?" will serve as the launch of the Levine Center to End Hate, which was founded about a year ago to amplify anti-bias work happening across Greater Rochester. It takes place at 7 p.m. on November 21 at the Lyric Theatre, 440 East Avenue. Tickets are $10 and are available at endhateroc.org.

Center organizers want to use the event to initiate other programs promoting conversation around racism — including the elements of white supremacy that are ingrained in our culture and systems — and other forms of hate, including sexism, homophobia, and anti-Semitism.

"The whole reason the Levine Center came about is because of the climate that we're living in now where there really is just such an increase in expressions of hate and hate crimes and hate speech and violence," said Karen Elam, the center's director. "They stand against that."

Kaleka said he and Michaelis will talk about their personal experiences and how their "worlds collided."

Kaleka contacted Michaelis after his father's death, as he was trying to make sense of what causes a person to commit a radical act of violence like that of the temple shooter.

He learned that hate is often about rejection. People scorn society because they feel like society has rejected them.

Michaelis has said that as a white power skinhead, he attacked and seriously hurt people just because of their skin color or perceived sexual orientation. In several accounts, he's traced his path as a child in an alcoholic family who responded to his home life by lashing out at his peers, initiating a cycle that made him more violent and filled him with hatred.

Those feelings spiraled as he entered the white power movement and dissipated after distancing himself from it, which he did after he became a parent.

As for what to do about hate, whether subtle and unconscious or overt and extreme, there's no one answer, Kaleka said. But he and Michaelis will challenge people at the event to examine their own lives and attitudes.

They want people to understand that, when they leave, they have a responsibility to question not only "how we hate" and their own prejudices, "but more importantly, how we create a more loving, nurturing, caring, empathetic, caring culture," Kaleka said.

"We need to create a society where we invite ourselves to be lovingly challenged," Kaleka said.