There is no such thing as too many ice cream parlors. When CITY was invited to a preview event for Sweet Mist -- a new liquid nitrogen ice cream shop in Henrietta -- in advance of its Friday official opening, I leapt at the chance. I dragged along my friend comedian Dario Joseph with me, though he didn't really put up much of a fuss. We drove there as quickly (and safely) as we could, and I could barely stifle my enthusiasm as we pulled into the Plaza at Win Jeff and headed toward the entrance festooned with Mylar "S" and "M" shaped balloons. Though we arrived at the start of the preview event, the line already stretched almost out the door.

Sweet Mist is the new venture of siblings Aman and Ajay Singh, who opened Naan-Tastic last summer. And similar to Naan-Tastic, the ice cream is served fast casual style: you choose a base (traditional ice cream, vegan coconut, or sorbet), a flavor, and toppings that include candy, fruit, nuts, cookies, cereal, and sauces. Sweet Mist's base flavors range from classics to fruity, coffee or green tea, a variety of candy, and spices like cardamom and saffron.

The next station is where the magic happens, and it looks somewhat like magic or a science experiment. After they combine the liquid cream and the flavor choice in a bowl, it is mixed in one of a series of large mixers that more resemble the arm of a robot mech, or perhaps a Kitchen Aid Pokémon that has reached its highest evolution.

Liquid nitrogen is poured while mixing, which produces a sinking cloud of misty evaporate and instantly freezes the bowl's contents. It is reminiscent of the scene in "Macbeth" with the three witches, except the ingredients in the ice cream are devoid of amphibian parts. I was able to see all three mixers going at once, and I expected Criss Angel to emerge from the behind the counter. Interestingly, Aman and Ajay don't call their employees "ice cream-mancers"; they just call them "family."

The third station is the toppings station, and then finally, you get your frozen delight. Theatrics aside, the technique is well worth it: the ice cream is smoother and denser than any other I've had, I assume due to flash freezing it with liquid nitrogen.

I brought my friend Dario with me because I knew I was going to choose one of the more "non-traditional" of their 35 flavor choices, and that he would pick something folks would be used to hearing.

They've got your chocolate, vanilla, and strawberry, but there is also matcha green tea, saffron, sweet ginger, and dill pickle. Yes, I said dill pickle, and do not knock it until you've tried it (I gave the pickle pizza at Rhino's a chance, and I am better for it). Dario thoroughly enjoyed his Cinnamon Toast Crunch ice cream with chocolate chips and cookie dough, and I loved my Cardamom with Pistachio Fudge and Brownie Bites (both $5.99).

Aman and Ajay's roots are in a few doors up from Sweet Mist; they started out working in their father's restaurant, Thali of India, when they were young. After carving out careers in business, they went back to food and opened Naan-Tastic, and now Sweet Mist Ice Cream. I'm thankful they made this decision, and am looking forward to more ice cream sorcery. 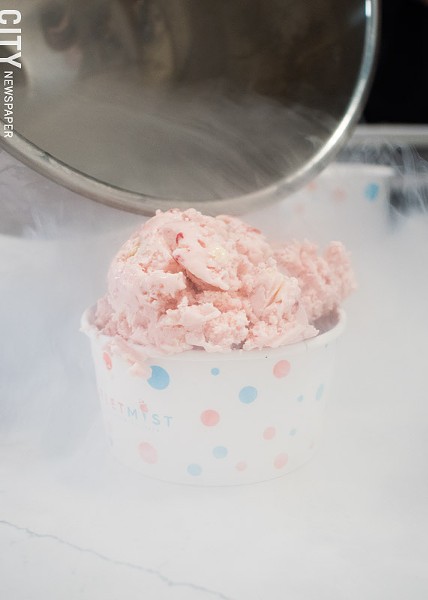