Did you know that Victor doesn’t end at the Eastview Mall? If you’re a city dweller who thinks the food court is the extent of the town’s culinary offerings and that Interstate 490 becomes a cosmic wormhole after Exit 28, you need to push your limits. Especially if you have an appetite.

For years, I frequented India House and Lucca Wood Fired Bistro in the cluster of eateries in the village of Victor, but now there are more gastronomic pleasures to explore there with the recent addition of the family-owned, pan-Asian restaurant Sweet Basil Cafe. 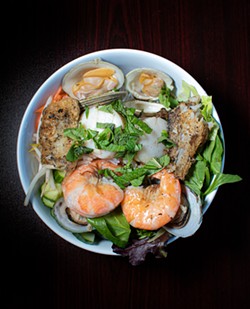 With plates inspired by Vietnamese, Thai, and Cambodian fare, Sweet Basil’s menu takes a flavorful trip through Southeast Asia that’s worth the trek past Eastview.

The name “Sweet Basil” is a reference to the herb that garnishes and flavors many Thai dishes. Head chef Jay Chhunwick and his wife, Clarissa Chhunwick, opened on East Main Street in October in a cobblestone building with a history as colorful as their menu. Before they made the space their own, it was a fancy bed linen store, a tattoo parlor, and, according to lore, housed a brothel around the time Victor was settled in the early 19th century.

Jay Chhunwick is a 15-year veteran of the Rochester area’s restaurant industry, having started in his teens. He honed his skills at Plum House on Monroe Avenue, Char Steak & Lounge, Papaya, Sakura Home, and Richardson Canal House. In 2019, he and his wife began planning to open their own restaurant. Jay had been aiming to do it by the time he was 30. He got there at 31.

On my recent first trip to Sweet Basil, I went straight for the seafood. That was my go-to when I schlepped through Cambodia, Korea, and Vietnam in my 20s, and I am a sucker for nostalgia.

Sweet Basil’s customizable vermicelli bowl spoke to me. It’s perfect for anyone who loves Vietnamese noodles but isn’t in the mood for the filling broth that comes with a bowl of phở (though phở is also on the menu). The noodles are topped with pickled carrots, mint, bean sprouts, and daikon radish. You also have your choice of sauce and protein. Though I chose seafood with sweet and spicy Korean sauce (reminiscent of Thai chili sauce) ($17.50), you can also get beef ($14.50), chicken ($13), or veggie ($11.50). 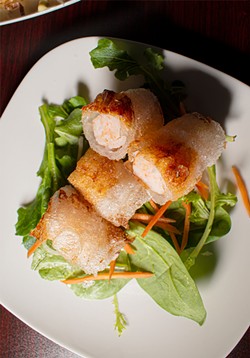 No matter your choice, you’ll get a mountain of food tightly stuffed into a bowl. My dish was topped with a slab of pollock as big as my hand accompanied by scallops and so many clams and mussels nestled on a bed of sprouts, greens, and vegetables that I wondered if Chhunwick forgot the noodles — until I dug in.

The portions are like what you’d get at the house of a friend whose mother complains you’re “wasting away.” I ate the whole bowl in one sitting and finished with some Vietnamese coffee, lightened with caramel and sweet condensed milk ($3.50).

Besides expanding Victor’s culinary palate, the Chhunwicks want to offer an education on the varied foods of Southeast Asia. Jay is a fan of Asian Fusion, but for now is sticking with the ripe selections of flavors derived from his Vietnamese, Thai, and Cambodian roots.

Clarissa told me a few people came in, glanced at the menu, and dismissively said they had already recently had Chinese take-out. That’s disappointing. Besides the fact that Sweet Basil doesn’t serve Chinese food, the cuisine from across Southeast Asia is as diverse as that of the different regions of China. An outsider may see soups and rice or noodle dishes with similar ingredients and think they’re all the same. Look closer, and you’ll see that what each region does with those base ingredients is what makes them unique. 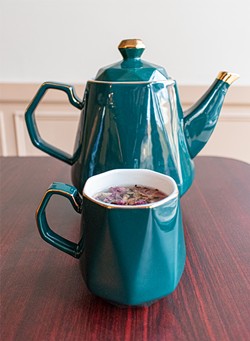 “Give two people palettes with the same colors of paint on them, and they’ll create something different,” Clarissa said. “We wouldn’t say that a van Gogh is identical to a Dali, after all.”

Sweet Basil Cafe’s dining room is currently closed, but the restaurant is open for take-out and pickup through DoorDash and Grubhub. That means anyone in the Rochester area can enjoy the restaurant, even if they can’t easily get to Victor or still fear the cosmic wormhole.


Chris Thompson is a freelance writer for CITY. Feedback on this article can be directed to CITY’s life editor, Rebecca Rafferty, at becca@rochester-citynews.com.