A red rubber ball the size of a coconut goes flying down a sheet of ice, followed by a stampede of adults carrying sticks. The intense mob shifts and slides as they reach the other side of the rink, spreading out around a small net.

"Here! Here! Here!" one player shouts. His teammate whacks the ball across the ice as another player loses control and careens into him. Another player darts past — legs wobbling like a newborn fawn — desperately trying to gain his balance as he cradles the ball with his stick and sends it just out of the goalie's reach.

"Goal!" the crowd of about 20 players cheer. They've gathered at Bill Gray's Regional Iceplex to watch other members of the Iceplex Broomball League as they await their turn on the ice.

Since it started as a series of casual pickup games in the summer of 2014, the league has attracted more than 70 players from across the area to try this hybrid of soccer and ice hockey. It's the brainchild of Brandon Bleier. He played broomball in college and wanted to spread the bug throughout Rochester.

"The puzzle pieces just kind of fell into place," Bleier says. "And a monster was born."

It's believed that broomball started in Canada, when players were trying to play hockey but didn't have ice skates. Originally, players (typically five on each team, plus a goalie) used a corn broom with the bristles either cut off or covered with tape. Now, players use sticks with small rubber or plastic broom-shaped "heads" to try and hit a ball (think a kickball, but smaller) into the opposing team's net.

Bleier describes broomball as a mix of the best elements from both hockey and soccer. "Hockey is fast paced; it's constant. Just bam, bam, bam, bam! Push it to the net. Rebound. Bring it back out to the point, shoot again," Bleier says. "Broomball requires a lot more patience. If there's not a shot, bring it back to the defense, make them chase you, wear them out, then make the pass and the shot."

Back in the game, attacker Tom LaSalle darts full speed down the rink after the ball. He's just two feet or so from the next player when he tries to slow down, his legs outstretching at an awkward angle to grip the ice.

Wobbling about, he finds his center and knocks the ball away from his opponent, bringing it away from the net. He pauses, looks behind him, then to his left, before clobbering the ball to his teammate, who pushes toward the net. The other players scramble along the ice to get into position. The ball flies back in front of the net. By the time the goalie sees it, it's been passed away to another player and is scooped into the net.

"It's a very good workout," LaSalle says. "Running back and forth on the ice is tiring." In fact, there's plenty of running during the two, 22-minute-long halves. After the game, steam rises off of the players' heads as they take off their helmets and pads. 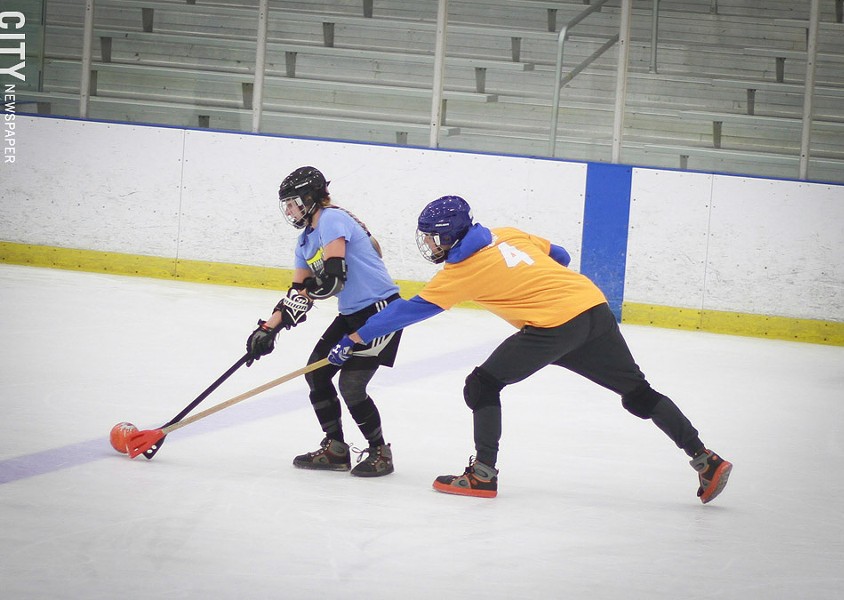 The league requires players to wear some sort of head protection. Bleier says they've seen everything from bicycle helmets to motorcycle helmets and even a construction helmet before. "As long as it straps to your head and isn't going to go flying off, you're good," he says. The league recommends a hockey or lacrosse-style helmet. Players can use regular running shoes or boots, but Bleier says specialty broomball shoes (about $80-$120) are best. "They have bristles that trap the snow and give you a much better grip," he says.

Bleier also strongly recommends shin guards, knee pads, and gloves (preferably hockey or lacrosse gloves) for protection from falls. The rink lends sticks to players who need them, but many have their own (that'll cost you about $50-$60 online).

Currently, it's a no-checking league. That means it's OK for players to have contact with other players, but not aggressive or intentional contact. As in hockey, two-minute penalties can also be given to players for tripping, slashing, high-sticking, or other aggressive plays.

Bleier, who officiates the games, says he rarely sees fights or arguments break out among players. "Every once and awhile tempers get heated in the moment of competition, but once everyone walks away, cooler heads prevail," he says.

The league runs year-round, typically on Monday nights, with 10-game sessions, plus playoffs and championships (the next session starts February 6). This season, there were five teams of 6 to 15 players each. Players can register with a team or the league managers will find a team for you to join.

"We find everyone a home," Bleier says. "In a sport like this, there's a lot of passion, but it's well-intentioned passion." 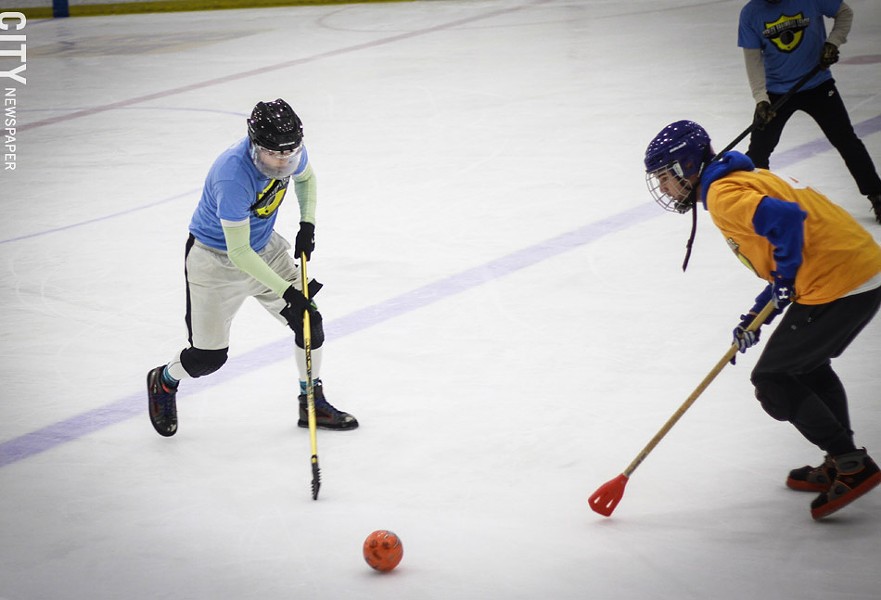 The league is coed and recreational, meaning teams must have at least one female playing or play with one fewer person on the ice. The league also allows subs for $10 per game.

"We try to make it as well-run and respected as any other sport league in Rochester, even if it is the baby brother right now," Bleier says. The 29-year-old says he hopes that the longer that the league is around, the more people from his generation will join. "Many people think, 'I'm too old to play hockey, I'm too old to play soccer' ... but you're never too old to play broomball."

That was part of the appeal for Tom LaSalle. He had played in local collegiate leagues, but was looking for something different and joined the league this past summer. "I watched videos on YouTube and I'm a big hockey fan, but I don't know how to skate," LaSalle admits. "So being able to play broomball, being able to run around on the ice, it gives me something that's a little like hockey, except it's a little more of a challenge."

Like Bleier, many of the players in the league started off in college. Broomball has a presence on the RIT, SUNY Geneseo and the College at Brockport campuses. "The collegiate leagues are great — a lot of players get exposed to broomball through that, but they have their own limitations," Bleier says. In addition to stricter game-play rules (like a no contact rule), they're also not allowed to serve alcohol, which is a big draw for these players after their games.

Bleier says the league has attracted people from all walks of life, from first responders to college students to computer programmers. "It's such an eclectic group of people," Bleier says of the league. "Broomball doesn't lend itself to a 'typical personality.' It doesn't box itself in. You don't have to be an 'Alpha' to come and play broomball. And it's a real pleasure to be a part of that."

To help generate local interest in the sport, the Iceplex hosts 'try it' nights once every couple months for free.

As for the future, Bleier hopes to see the league grow enough to meet two nights a week – perhaps a coed rec league and a competitive league. He's also hoping to sponsor a team to send to national competitions.

"The feedback is almost always overwhelmingly positive," Bleier says. "The players want the league to run and grow as much as anyone else. That's always been my mentality: 'It's our league.'"

For more information on broomball at Bill Gray's Iceplex, check out billgraysiceplex.com/broomball.html.