Swarms of bees at Hartnett Gallery

Classical associations with bees have included abundance and order, but these days any mention of the miniscule marvels tends to spark anxiety about environmental doom, colony collapse, and the shadowy bearing that this could have on human life. And along with a sense of fascination, these were the associations that sprung to mind when viewing Heather Green's "Pinpoints of Perception: Portraits of 1000 Native Bees" at Hartnett Gallery.

Unfortunately for anyone who couldn't make it to Green's artist talk last week, there is no context offered on site for the artwork. There's no artist statement, no information about the artist or exhibit, only an incomplete list of species with the promise that this will be remedied during the run of the show. 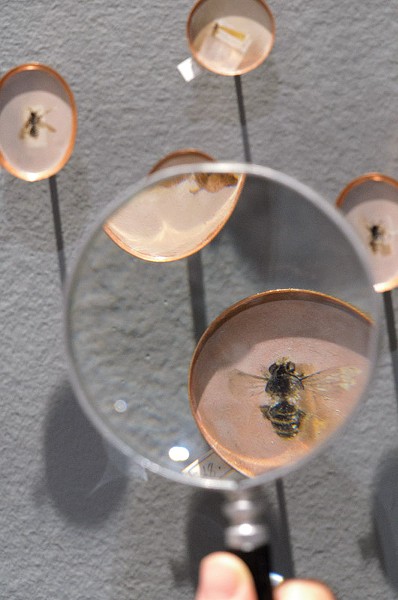 So referring to the artists' website for more information, we can learn that "Pinpoints of Perception" is an ongoing project that Green originally created for an Art & Science research laboratory she participated in during 2011, which focused on climate change in southern Arizona.

"As part of the laboratory we stayed at El Coronado Ranch hosted by Cuenca los Ojos Foundation, where I learned about Dr. Robert Minckley's research on native bees of that area," Green says on the subpage associated with this project.

In the gallery, the ephemeral nature of the insects is immortalized twice: in groupings of lovingly painted, life-sized oil portraits of different species, as well as actual species samples, pinned within eight display cases in the middle of the space.

The title of the exhibit itself is misleading, as there is nowhere near 1000 portraits of bees, unless the specimen samples themselves can be construed as portraits. Even counting those, the number is still doubtful, but this is an ongoing project, and Green plans to add to the number overtime.

Green specifically selected bees from the Sonoran Desert — a 100,000-square-mile space spanning southern Arizona and California and northern Mexico — because it holds one of the world's richest areas for bee diversity, with as many as 1,300 native species believed to inhabit the area (there are nearly 20,000 known species of bees in the world).

To create her paintings, Green borrows specimens from university collections to photograph and replicate in oil inside small copper trays, which the artist has pinned to the walls in swarms. Above each grouping are panels of glass hung at right angles to the wall, with a list of Latin names etched into each and casting their shadow on the wall below.

"Each time, it's a surprise to see what they look like — as of yet there isn't a complete field guide or resource available to the public to see all of these bees — and it's surprising how much variety there is," she says.

And the diversity is astounding. The audience is invited to pause at each specimen, whether rendered or pinned, and study the intricacies of each with provided magnifying glasses. The agapostemon angelicus is stunning with its unexpected blue hue, the wraith-white centris pallida looks like the ghost of a bumble bee, and the ashmeadiella casieri is only slightly larger than the pin head hovering above its diminutive form. Each plays a crucial role in the puzzle of the environment that we are racing to understand, even as various shifts threaten life as we've known it.

Each painting is numbered with a small tag, and a key below lists the information found on its label including the scientist, year and place of collection, and sometimes such details as the Latin name of the flower where the bee was found. "The process of finding names, borrowing and photographing specimens and labor-intensively painting them essentially captures and recaptures, collects and recollects — an obsessive endeavor that in itself becomes an act against loss," Green says.

The artist means for the work to be both archival and interpretive. Through her installation, Green shifts the intimate knowledge of these varied and industrious creatures from the privileged, cloistered world of the academic collection to the public sphere, illuminating the vast bee diversity that dwells within just one small area of the world.

"I hope this project will inspire others to begin to see native bees and actively participate in their conservation," Green says. The project "pays homage to a vast but vanishing natural abundance while simultaneously honoring the species themselves and the scientists who have been profoundly committed to their study and preservation even as they document their decline."

In addition to awareness, Green hopes to raise funds to restore wildlands with native pollinator plants by donating a portion of her sales proceeds to Sky Island Alliance.