Susan John, fighter for women and labor in Assembly, dies at 64 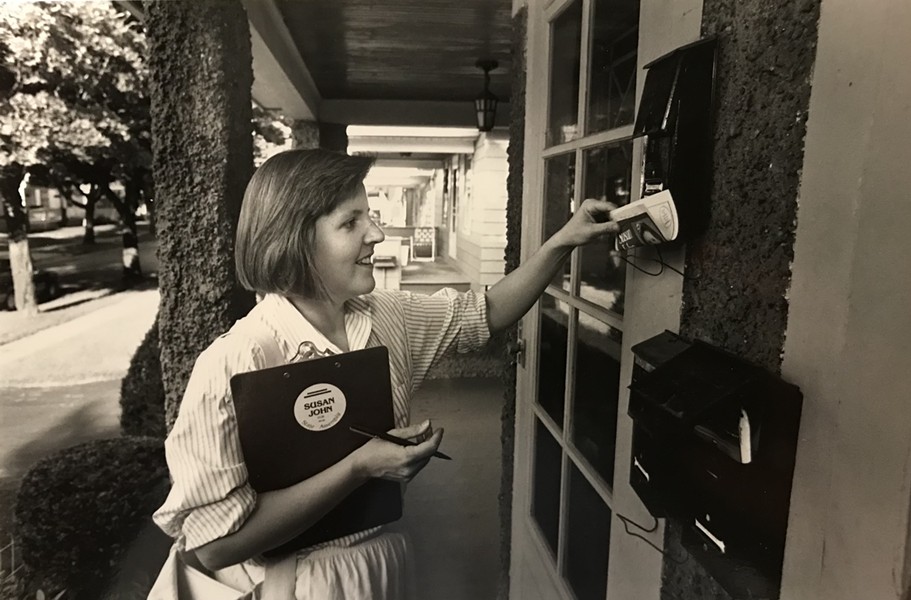 FILE PHOTO Susan John on the campaign trail during her first run for office in 1990.
Susan John, who represented Rochester in the New York Assembly for 20 years and was one of the state Legislature's leading champions of rights for women and working people, died Monday. She was 64.

She had cancer and died in Florida, where she had been living in Englewood, south of Sarasota on the Gulf Coast, for the last 10 years, according to friends and former colleagues.

John was 32 when she left a partner-track in the law firm that became Phillips Lytle in 1990 to run for the 131st Assembly District as a Democrat. She prevailed in a close and rancorous primary over the seven-term incumbent, Gary Proud, who labeled her an "ultra-liberal" and "definite one-termer," and went on to win the general election.

She would eventually win re-election nine times and, in the process, establish herself as a stalwart voice for causes close to women and families before declining to run for an 11th term in 2010.

"Susan was always a person who felt strongly about women having their own voice, and this was a time, of course, when women were not running for elected office in the numbers they are now," said her former chief of staff, Chris Christopher. "Susan felt very strongly that women deserved to have their voices uplifted, and I think she cared very much for not just women having their own voice, but all those who needed someone to amplify their message."

During her time in Albany, John successfully advocated for funding for domestic violence shelters, breast cancer outreach and education, rape crisis centers, and teen pregnancy prevention programs. She also helped create the statewide Amber Alert system, linking police with media outlets to quickly spread the word about children who were feared to be missing or abducted.

In the early 2000s, when Monroe County exhausted its child care funding, John fought for an infusion of cash that allowed the county to stave off planned cuts to its subsidies, and later was integral to the passage of legislation that made it easier for counties across New York to access child care funding.

"People drove her," said her former legislative aide, Allan Richards, who now works with John's successor in the state Legislature, Assemblymember Harry Bronson. "Making sure that those that had the least were the ones she looked out for. She was a very smart and generous woman."

Born in Chicago on Nov. 20, 1957, John was a graduate of the Syracuse University College of Law and practiced business and commercial law before getting into politics. She was married to Paul Ferber, a political science professor at the Rochester Institute of Technology, but they later divorced.

John was the longtime chair of the Assembly's Labor Committee and, for a time, headed the body's Committee on Alcoholism and Drug Abuse. Her stature on the latter was marred just a few months into her tenure when, in March 1997, she pleaded guilty to driving while impaired after being stopped by police in an Albany suburb.

"This will give me additional insights into the problem of drinking and driving, and I believe, will allow me to do my job even more effectively," she was quoted as saying upon entering her plea.

The incident turned out to be a minor setback for her political career, which would last another 13 years.

John relocated to Florida shortly after leaving politics to be closer to her mother, friends and former colleagues said. Her mother preceded her in death.

Christopher, her former chief of staff, recalled John as strong-willed but not obstinate.

"She was never one to just go along with the crowd," Christopher said. "If prevailing wisdom was this wide path that everyone was walking down, Susan was on the side of that and because of that, she had flashes of brilliance and fresh perspectives on things.

"She didn't just follow along, she made her own path."

David Andreatta is the editor CITY. He can be reached at dandreatta@rochester-citynews.com.