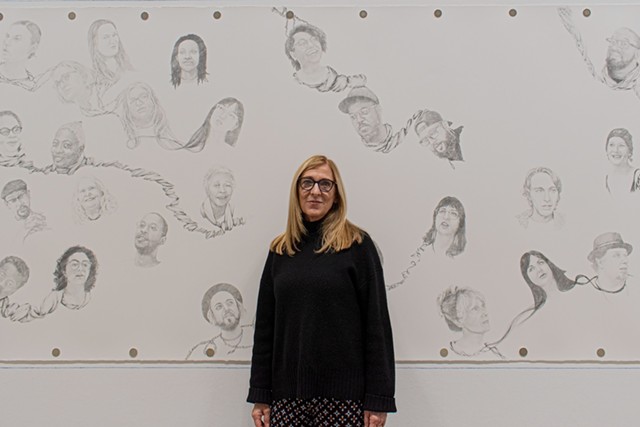 A new, large-scale pencil drawing on display at Rochester Contemporary Art Center is an unassuming collection of floating heads of local artists and musicians. But it is their connection to one another that grounds the work and gives it power.

Artist Susan Begy’s “Entanglement” is as long as a school bus, the lone work on a wall at Rochester Contemporary Art Center on East Avenue, as part of the exhibition “State of the City 2022.” The work-in-progress displays portraits of members of Rochester’s creative community, linked to one another by elements of each’s physical appearance. “For Matt here with the checkered shirt, I started to look at things on each person that I could use as connecting,” Begy said as she examined the mural. “I'm going to use Sarah's tattoo, I'm going to use something in the flowers.”

For “Entanglement,” Begy took 30 to 50 photos of each subject, and recorded them talking about their work. She listened to the audio while drawing each portrait and she relied on tracing to achieve a photorealistic look. Each portrait took about two hours to complete, Begy said.

“I could have taken less time, but I wanted to carefully render these,” Begy said. “I wanted them to be lovingly and carefully done, because I think that's the nature of relationship, is to take time and to craft a relationship and to craft these portraits. I wanted it to reflect that kind of care.”

The subject matter of Begy’s drawings can be deeply human and provocative. In 2017’s “Protection,” she weaved drawings of babies and guns into an image of the male genitalia. A companion piece from 2018, called “Mystery,” images of babies and outer space are interwoven into a drawing of the female genitalia.

Similarly, “Entanglement” focuses on the interplay between the micro and the macro, so that smaller images make up the larger images. In this case, smaller portraits share space to create a kind of illustrative chart depicting just some of Rochester’s family of artists.

“Part of the reason I started using twisting cloth in my work is this idea of people wrestling with how to live with one another,” Begy said. “And I think, in the creative community, we wrestle with all kinds of things. We wrestle with the difficult issues, no matter what discipline it is — whether it’s visual art or performance or music, we’re always wrestling with those difficult issues. And we work together, and we need each other, and we support each other, and we get ideas from each other and feedback from each other.”

“Entanglement” features several lines of connection. One line starts with artist, curator, and educator Amanda Chestnut, whose scholarly work often focuses on Black art history. “Entanglement” illustrates a truth about the Rochester art community that is less known to those outside of that circle, Chestnut said.

“We all know how small this community is, and how attached to each other we are,” Chestnut said. “ But I think that outside of the art community, that network gets lost or overlooked. People might not always be aware of how closely knit we all really are.”

Chestnut connects with Quajay Donnell in “Entanglement” — and in real life.

“Quajay is easily one of the best hype men in the arts in Rochester,” Chestnut said. “Anytime I’ve had a project, anytime I’ve had an idea, if I reach out to Quajay, he says ‘Yes’ before I can finish telling him what it is.”

Donnell’s photographic documentation of the city’s public murals has earned him attention in the last several years, as well as a prominent spot as a featured artist alongside Begy in the “State of the City” exhibition.

Chestnut and Donnell have both written for CITY on a freelance basis. Now he’s in “Entanglement,” where he’s connected to Richard Colón, an academic advisor at the University of Rochester who also produces street photography. Donnell and Colón’s friendship grew from sharing their work with one another on social media in the early onset of the pandemic.

“There's many different types of art forms that intertwine and interconnect between the arts community,” Colón said. “I grew up in Rochester, I went to School of the Arts. So I know that we have a rich, heavy, deep rooted connection on just arts as a whole.” In turn, Colón links to Magnus Champlin in the mural. Champlin produces drawings, paintings, mural art, and sets for theatrical performances. He recalls when meeting Colón delivered homemade flan to Champlin at his home.

“Everyone in there cares about the person before them and after them,” Champlin said of Begy’s mural. “It’s fun to see these faces of people I love, just spread across this wall, being like this is the heartstrings of Rochester.”

“State of the City 2022” and “Entanglement” are on view at RoCo through Nov. 12, with Begy drawing in the gallery from noon to 2 p.m. on Thursdays and 6 to 8 p.m. on Fridays through Nov. 11. For more information, go to rochestercontemporary.org.