Susan B. at the symphony

‘The Mother of Us All'

Free pre-concert chat one hour before each performance

This year’s observances of Susan B. Anthony’s 200th birthday celebration and the centenary of the 19th Amendment are momentous events, but at first glance they may not seem to inspire musical celebrations. The Rochester Philharmonic Orchestra is prepared to prove otherwise this weekend and next.

“These are significant milestones,” Stare says, “and in planning this season we definitely wanted to make note of them.”

On January 30 and February 1, Music Director Ward Stare and the orchestra present an imaginative program titled “Women’s Suffrage: Past + Present,” and on February 6 and 8, Stare leads a concert performance of Virgil Thomson and Gertrude Stein’s operatic salute to Susan B. Anthony, “The Mother of Us All.”

The first half of this week’s concert is a triptych of orchestral compositions by three women: Fanny Mendelssohn-Hensel, from the 19th century; Julia Perry, from the 20th century; and one from the 21st — Gemma Peacocke, a New Zealand-born composer who has already received some prominent performances and is currently studying at Princeton University.

Her work “All on Fire” is a commission from Stare and the RPO, inspired by a fiery quote from Susan B. Anthony: “How can you not be all on fire?...I really believe I shall explode if some of you young women don't wake up — and raise your voice in protest against the impending crime of this nation upon the new islands it has clutched from other folks. Do come into the living present and work to save us from any more barbaric male governments.”

Stare has high hopes for the brand-new piece, created by the RPO in tandem with the composer. Peacocke visited Rochester in November for a working session and rehearsal with the orchestra, and Stare says she has incorporated the musicians’ ideas into a new version of the score.

Peacocke’s new work is preceded by “Overture in C Major” by Fanny Mendelssohn-Hensel, who was often overshadowed (and occasionally plagiarized) by her famous brother. But to Stare, “This is a very good piece, and Fanny can be listed among other great musicians of that era. If you saw this score with just the name ‘Mendelssohn’ on it, you’d easily think it was an early work by Felix.” The first half ends with a “Short Piece for Orchestra” from 1952 by the composer Julia Perry (1924-1979). Despite its abstract title, the piece is, in Stare’s words, “dramatic and brooding.”

“I hope this first half demonstrates the huge variety of music by women composers,” he adds. “Regardless of the composer’s gender, these are simply very good pieces.”

The second half of this week’s program is filled not with a major symphony or concerto, but a work of theater – “True and Devoted,” a documentary-style play by Mark Mobley, based on his conversations about women’s suffrage and its consequences with five Rochester women: Mayor Lovely Warren, city councilperson and Center for Youth Director Elaine Spaull, Susan B. Anthony Center’s Catherine Cerulli, “Empty Closet” editor Tamara Leigh, and Lola De Ascentiis, a 15-year-old docent at the Anthony House who calls Anthony “a really big inspiration.” The women are not talking heads on screen, though; their words, taken from Mobley’s interviews, will be performed live by five actors.

Ward Stare was familiar with Mobley, a writer and classical music host for NPR, through a documentary based on his interviews about race relations with a variety of people, using live orchestral music to underscore the drama. Stare thought a similar documentary approach to conversations about women’s rights, with music played by the RPO, would work, so he asked Mobley to work on it. The result, titled “True and Devoted,” premieres Thursday, January 31.

The play’s the thing here, but what about the music? Stare and Mobley begin with Joan Tower’s “Fanfare for the Uncommon Woman,” and most of the other selections come from such familiar (male) names as Schubert, Copland, and Dvořák. There’s an interesting exception: a movement from a symphony by Mary Alice Smith (1839-1884), surely one of the few extant symphonies by a Victorian woman composer. She wrote two. Julia Perry, by the way, wrote twelve.

Under Ward Stare’s direction, the RPO has presented several operas in a concert format, but they’ve been established favorites such as “Carmen” and “La traviata.” Stare’s choice this year, however, is out of the ordinary, but perfectly appropriate: “The Mother of Us All,” Virgil Thomson and Gertrude Stein’s opera about Susan B. Anthony.

“The Mother of Us All” has been produced sporadically since its premiere at Columbia University in 1947, but with this year’s women’s rights-centered anniversaries, Ward Stare saw two timely and obvious reasons to present it in Rochester. Stare notes that the New York Philharmonic is presenting a concert version of “The Mother of Us All” the same weekend, “proof that great orchestras think alike,” he says. 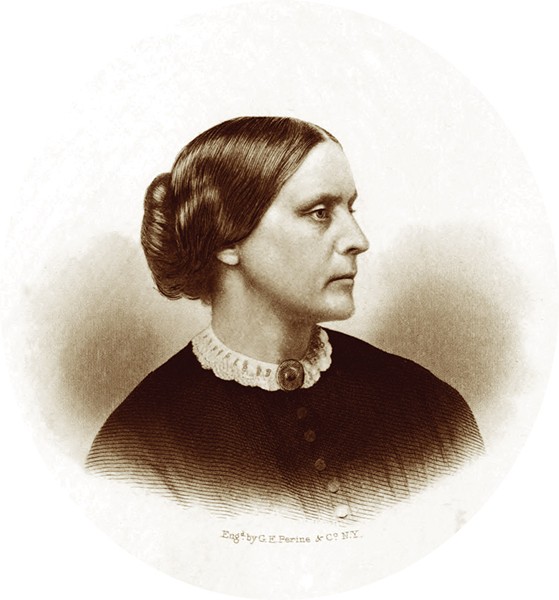 Well, this opera is “about” Susan B. Anthony as much as it is “about” a lot of things — not unlike Stein and Thomson’s 1930s collaboration, the equally strange and wonderful “Four Saints in Three Acts.” “The Mother of Us All” could be said to take place in Rochester, but in truth Susan B. Anthony’s life and work are at the center of a delightfully random historical pageant, whose large cast includes Daniel Webster, Andrew Johnson, Ulysses S. Grant, a Walt Whitman-esque character named Jo the Loiterer, and such dimly remembered 19th-century Americans as Senator Anthony Comstock, the actress Lillian Russell, and Supreme Court Chief Justice Thaddeus Stevens. For good measure, “Susan B.” is also joined by “Gertrude S.” and “Virgil T.” The female characters are engaging, while the powerful male characters a bit obtuse.

Stare says that Thomson’s deceptively simple score “makes compelling use of American period music: hymns, military music, folk songs, waltzes.” The musical potpourri reflects what the conductor calls the “complexity and diversity” of the opera and its characters. Thomson’s music also gives a dramatic arc to Stein’s fanciful, nonlinear verbiage. For example, in the opera’s second scene, there’s a bit of artfully controlled chaos among many of the characters, which Ward Stare compares to “a 19th-century Twitter feed.”

But there is nothing chaotic about the opera’s ending. It is simply Susan B. onstage alone (literally on a pedestal), weary from her long struggle for women’s equality and an evening of 19th-century mansplaining. Anthony was of course a great writer and orator, but Stein’s words and Thomson’s hymn-like music give her a voice as eloquent as any opera character’s: “In my long life of effort and strife…I was a martyr all my life, not to what I won, but to what was done.”

Ward Stare notes that his preparation for these upcoming concerts included a private tour of the Susan B. Anthony House on Madison Street, which he found very moving. “To see the room where she met Frederick Douglass and other great figures — and the work room where she wrote so many amazing pamphlets — made me even more appreciative of everything Anthony went through in her life.”

Virgil Thomson noted with satisfaction of “The Mother of Us All,” “It never fails; it’s foolproof.” That’s entirely appropriate for an opera about the woman who stated of her mission, “Failure is impossible.”

David Raymond is a freelance writer for CITY. Feedback on this article can be directed to dkushner@rochester-citynews.com.