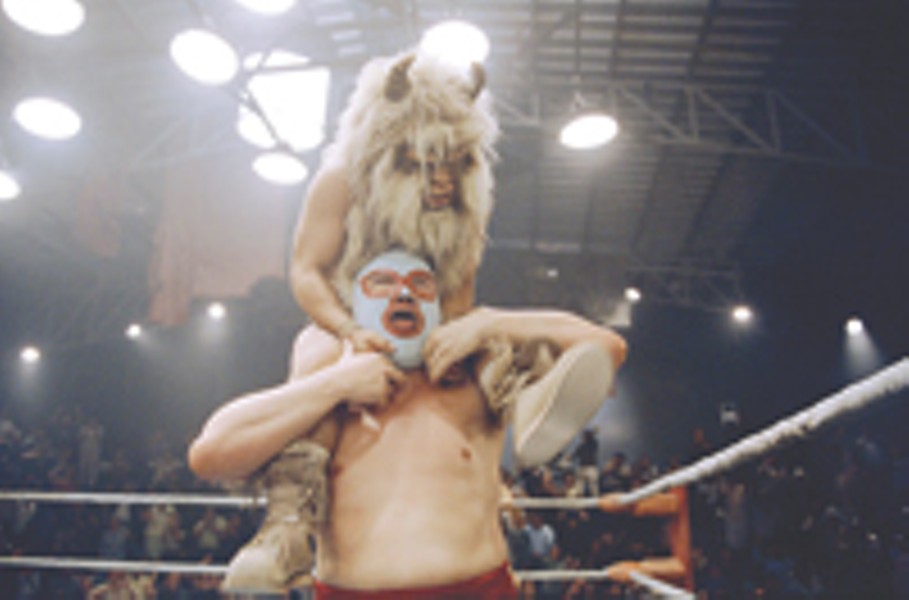 Courtesy Paramount Pictures Who is that masked man? It's Jack Black, fighting off tiny yak men in "Nacho Libre." 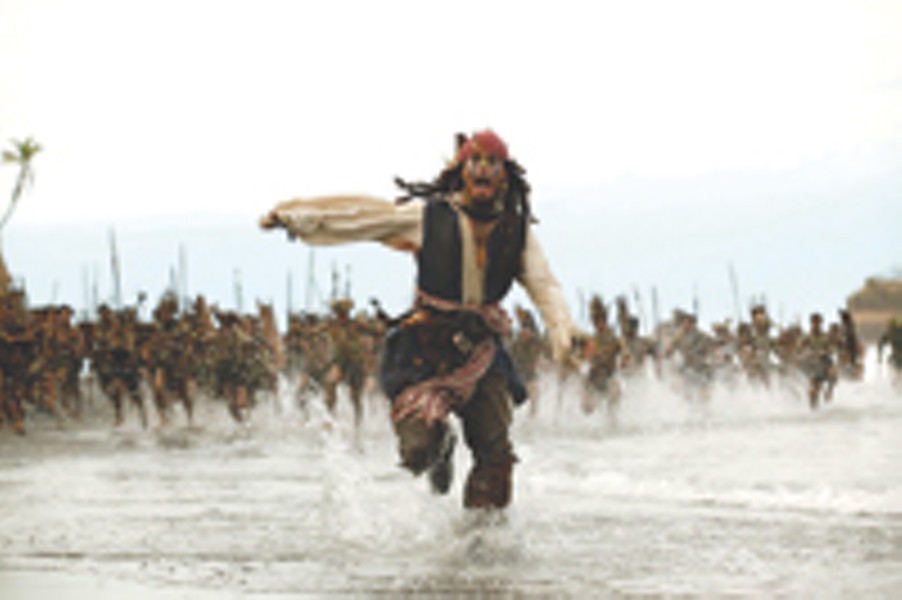 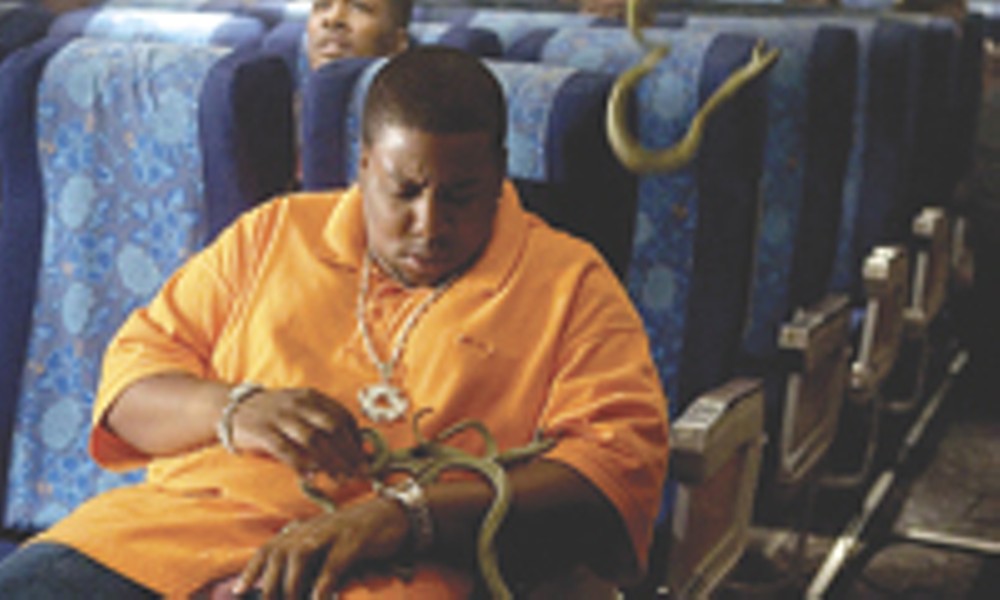 Courtesy New Line Cinema The unfriendly skies: Kenan Thompson encounters snakes on a plane in the creatively titled "Snakes on a Plane."

This summer, stop feeling guilty about forgoing lovely weather in favor of an inky movie theater. Should your conscience continue to nag you to go outside and play, consider the following pro-movie rationalizations:

• Movies leave us brimming with optimism and entitlement, both desirable sensations until we realize there is really no valid justification for either. But the ephemeral bliss is worth the crushing low.

• With a skin tone that falls somewhere on the color wheel between Alabaster Telecaster and Porcelain Corpse, it's obvious I don't see much of the sun, and I try to keep skin damage to a minimum. By avoiding the scorching star, you too could hack at least a decade off your age and no one would bat an eyelash (except for your friends and family, who unfortunately know too much and would need to be silenced).

• Popcorn is now considered a whole grain, and chocolate contains antioxidants, chemicals that sharpen your mind and encourage happiness, as well as something called anandamide, which is akin to THC. You know what I'm talking about.

Still looking for more reasons to skip that sticky picnic and hole up in the arctic dark? These are the summer flicks on my radar: 15 films that run the gamut from little indie to inevitable blockbuster, as well as one movie that's just too good to be true.

I'm one of apparently three people on the planet who hated 2004's Napoleon Dynamite. But director Jared Hess' follow-up to his sleeper hit that spawned the new century's most obnoxious catchphrases is co-written by Mike White (who also penned School of Rock) and stars Jack Black as a cook who hits the wacky Mexican wrestling circuit in hopes of winning prize money to help orphans. A go-for-broke physical comedian shoehorned into wrestling tights and wearing a mask? Perhaps it's time to let bygones be bygones. (6/16)

Sandra Bullock apparently forgave Keanu Reeves for hanging her out to dry on Speed 2, because now they're costarring in this remake of a South Korean romance about a woman who exchanges letters with the previous owner of her home through its mailbox, despite the fact that they're living two years apart. Sounds nonsensical, right? When the trailer began I was rolling my eyes, yet by the end of it I was mopping them. (6/16)

This documentary about New York Times crossword editor Will Shortz explores the anatomy of a puzzle and features interviews with crossword junkies like former president Bill Clinton and future president Jon Stewart. Could it be the nonfiction hit of the summer? Remember, at this time last year no one cared about Antarctic penguins, either. (7/7)

I can't be bothered with Superman's return, and the X-Men will have to make their last stand without me. (Kelsey Grammar in body paint? There are some things you just can't unsee.) The only franchise slam-dunk I'm excited aboutis Pirates: Johnny Depp reprises his Oscar-nominated role as the woozy Captain Jack Sparrow, and this time around he's doing battle with Davy Jones (of locker, not Monkees, fame). More good news: next year's Pirates follow-up (director Gore Verbinski's shooting 'em back to back) features Chow Yun-Fat! (7/7)

In this prequel to the acclaimed Comedy Central series, Amy Sedaris --- quite possibly the least vain person alive --- reprises her role as Tragedy-faced Jerri Blank, the 46-year-old ex-junkie who returns to high school after some time spent in the pokey. Also stars show regulars Paul Dinello and Stephen Colbert, as well as Matthew Broderick, Sir Ian Holm, and the suddenly ubiquitous Philip Seymour Hoffman. (7/14)

Hollywood continues to plunder the Land of the Rising Sun for ideas, and the latest is adapted from Kiyoshi Kurosawa's excellent Kairo, a horror film about internet-based evil. I have mixed emotions about this remake, but Kurosawa (no relation to Akira) is one of Japan's most inventive filmmakers, so it was really only a matter of time. Dig up Kurosawa's Cure and its sequel, Charisma, if you get a chance. (7/14)

The Lady in the Water

The latest film from M. Night Shyamalan --- "a bedtime story," according to the trailer --- stars Paul Giamatti as an apartment superintendent who finds a beautiful water creature, played by Bryce Dallas Howard, in the complex's swimming pool. Could be dumb, but I think Shyamalan knows he's trying our patience. Plus the person writing this absolutely loved Howard and Shyamalan's last film, a delicate wreck called The Village. (7/21)

No, this sequel to 1994's raunchy indie benchmark is not necessary. And no, you'll never get back the two hours and $7 you spent on Kevin Smith's last disaster, Jersey Girl. But if at any time in the last decade you've invoked Dante's lament on a thwarted day off from your job ("But I'm not even supposed to be here today!"), then you'll also be curious about how Randal and Dante are handling life in their 30s. (Hint: Would you like fries with that?) (7/21)

I Could Never Be Your Woman

Michelle Pfeiffer returns to the world of romantic comedy as a producer who falls for a younger man (Paul Rudd, The 40-Year-Old Virgin) when he auditions for her Saved by the Bell-type TV show. There was recently an impromptu summit in our break room about who among us would, um, "date" Paul Rudd. Just in case you were curious about what goes on behind the scenes at a serious newspaper. (7/28)

Much of this year's Sundance buzz focused on this tale of the eccentric Hoover clan (headed by Toni Collette and Greg Kinnear) embarking on one of those only-in-the-movies road trips in order to get their daughter (Abigail Breslin, Signs) to the titular pageant. Directed by video auteurs Jonathan Dayton and Valerie Faris.(8/18)

It initially sounds like a clichéd genre pic: dedicated inner-city educator/basketball coach forms an unlikely bond with one of his students. But that's only after the student discovers him smoking crack in the locker room. Ryan Gosling (The Notebook) supposedly turns in (surprise, surprise) an astonishing performance as the teacher trying to hold it together. (8/11 ltd)

The sorely missed (by me, anyway) Edward Norton has a couple of films out this summer, and in this one, set in turn-of-the-century Vienna, he plays a magician who falls for the fiancée of a prince (poor Rufus Sewell, always the cuckolded fop), only to be dogged by a police inspector (Paul Giamatti) looking to discredit him.(8/18 ltd)

The Science of Sleep

After a quick stop-off at Dave Chappelle's Block Party, Michel Gondry returns to narrative territory with the story of shy Stephane (Gael Garcia Bernal, Bad Education), his dynamic dream life, and his charming neighbor Stephanie (Charlotte Gainsbourg, Jane Eyre). Gondry both directed and wrote the screenplay for this one, so expect another whimsically heartbreaking head-trip.(8/25)

Julianne Moore, David Duchovny, Billy Crudup, and Maggie Gyllenhaal star in this romantic comedy that focuses on two Manhattan couples falling in and out of (and maybe back in) love. It's the latest from underwhelming writer-director Bart Freundlich (World Traveler), but there's got to be a reason he continues to get financing. (9/1)

Snakes on a Plane

Samuel L. Jackson stars in what would have probably been an otherwise dismissible B-movie thriller but for that magnificent title/handy plot synopsis. Could this be a new franchise? Snakes on a Stagecoach! Snakes on aJet Ski! And don't get me started on all of the possible marketing tie-ins (note to Olive Garden: how about a spaghetti special called Snakes on a Plate?). The buzz on Snakes right now is deafening, but with a release date pushing Labor Day, it's got to find a way to sustain... oh, who am I kidding? No one's going to forget about it. It's snakes! On a plane! (8/18)

Remember, release dates are subject to change, but if you eat enough chocolate you may not even notice.