A couple of years ago, Cavaliere got a Chevrolet Volt, which is a plug-in hybrid that runs primarily off of a battery. She charges it at her Penfield home.

But Cavaliere says she knew that if she simply plugged her vehicle into its charging station, some of the power would come from plants that run on fossil fuels. So she and her husband pursued a solar power system to offset the electricity they use for the Volt; they had 18 panels installed on their roof.

"I had wanted an electric vehicle for a long time and it really didn't seem to make sense to do that just to use more fossil fuels from a different location," says Cavaliere, a General Motors engineer.

A growing number of homeowners, businesses, and institutions in New York and across the country are adopting solar. Driving that interest is a combination of affordability, awareness, environmental concerns, and increasingly aggressive state and federal incentives.

And solar's supporters say that the spike in electric prices this past winter will probably generate even more interest in solar technology. Utility companies blamed the price increases, which happened during periods of particularly harsh weather, on tight natural gas supplies.

"I think people really look at those sort of things and say 'OK, what can I do to stop that from happening to me in the future?'" says Kevin Schulte, CEO of Sustainable Energy Developments, a company based in Wayne County. "And solar is a very good way to remove that volatility from your life."

But solar still faces obstacles in terms of adoption and perception. Some critics characterize it as an expensive, noncompetitive energy source that is overly dependent on government subsidies; supporters vehemently disagree.

And in places such as Rochester, where complaining about the weather is something of a local pastime, people tend to question whether the technology will work. In response, solar's supporters almost universally point to Germany; the country leads the world in solar installation and production, but gets less sunlight than Rochester, they say.

"It is the biggest misconception out there right now," says Matthew Rankin, renewable energy project associate at Larsen Engineering. "The more that people install solar, the more people will realize that it must work."

Cavaliere worked with fellow Penfield resident Bob Kanauer and his firm, LTHS Solar, to design a system that would provide enough power to fully charge her Volt six days a week. A full charge is enough to get her to and from work.

Not only has the system covered the electricity consumed by the car, Cavaliere says, it's actually generated more power than expected.

"There's more than enough sunlight here to be able to do it," she says.

Solar power had been making gains in New York for a few years prior to 2012. But that year, Governor Andrew Cuomo rolled out his NY-Sun program, which provides financial assistance for solar projects through the New York State Energy Research and Development Authority. And the industry took off. 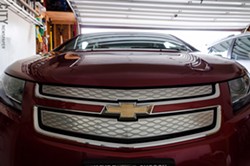 The State Legislature has renewed the program for another decade, and over that time New York will provide approximately $1 billion for solar incentives. The incentives are awarded either competitively or first come, first served — depending on who's seeking the assistance.

In the two years since the program began, more solar has been installed statewide than during the entire prior decade, says Alan Wechsler, a NYSERDA spokesperson. Statewide, solar capacity totaling 316 megawatts has been installed and connected to the electric grid or is under contract, Wechsler says. (Not all of the projects are receiving NYSERDA funding.)

The Solar Energy Industries Association says that in New York, one megawatt of solar is enough to power 155 homes. The figure takes into account the average electricity consumption of New York homes and the average production of photovoltaic systems in the state.

The growth has been sharp locally, too. In 2003, Rochester Gas and Electric connected two solar systems to its electricity distribution system, according to information provided by the company. Last year, it connected 92 systems. Since 2003, the company has connected a total of 309 photovoltaic systems to its grid, and combined they have a generating capacity of 3.5 megawatts.

Prior to 2012, most of the statewide solar growth was at the residential level. But after that, commercial and industrial installations began growing at an aggressive rate.

In 2011, a large solar project came online in Long Island. The 32 megawatt solar farm was built through a partnership between BP Solar, the US Department of Energy, and the Long Island Power Authority.

Closer to home, Rochester Institute of Technology has installed two solar systems on its Henrietta campus. The system on the Golisano Institute for Sustainability building has a generation capacity of 400 kilowatts, or just under half a megawatt.

RIT plans to add another two megawatts of solar on campus, says Ryne Raffaelle, RIT's vice president for research and a former director of the National Center for Photovoltaics at the National Renewable Energy Lab.

For that project, he says, the university wants to partner with a solar developer using a power purchase agreement.

Under those agreements, the customer usually provides the land or rooftop space, the developer builds and initially owns the array, and the customer commits to buying the electricity at a certain price. RIT wouldn't own the array — though it would have a chance to buy it a few years down the line — but the power will still be cheaper than grid-supplied electricity, Raffaelle says.

"It pays for itself," he says.

Local government officials have started looking to solar power as a way to reduce energy costs, and they see the purchase power agreements as a good option. The Wayne County town of Williamson is using the arrangement to buy power from a solar system being built on a closed town landfill. Officials expect that the purchase agreement will save the town $1.5 million over 20 years.

Webster and Penfield are gathering public input on potential solar projects, and both towns are interested in using purchase power agreements.

Penfield officials have proposed installation of a solar system near the town Department of Public Works building. Kanauer, the Penfield solar consultant and a member of the town's Energy and Environment Advisory Committee, says the site would accommodate a system that would offset between 50 percent and 75 percent of electricity usage at town government buildings.

"We're always going to need gas and electric, so what can we do to help take that edge off?" says Penfield Supervisor Tony LaFountain.

One of solar's big selling points is payback. After a certain number of years, the systems generate enough no-cost or low-cost electricity to equal out the purchase and installation costs.

But solar's supporters say there are other benefits, too. The technology creates jobs since someone has to sell and install the equipment. Statewide, there are approximately 400 solar companies employing more than 5,000 people, says NYSERDA's Wechsler.

And on-site solar generation can be more efficient than distributing electricity over miles of power wires. Solar power is also an important tool for cutting greenhouse gases — a step that the US and other countries need to take to avert the worst effects of climate change.

Solar panels crank out the most electricity during the middle of the day, which is the same time that consumers use the most power. So production aligns with demand, which isn't always the case with other renewables, including wind. And any electricity that isn't immediately used at the site gets put into the electric grid, and the state's electric utilities provide credit to the customers generating it. 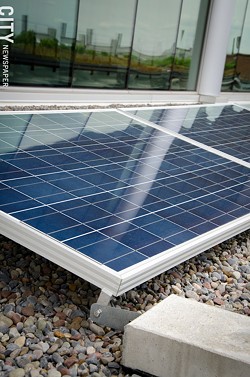 "Distributed solar PV, when strategically placed, has the potential to reduce the strains put on the distribution system during times of peak energy demand," RG&E spokesperson Dan Hucko said in an e-mail. Though Hucko also said that the benefit depends on a number of factors, including the capacity of a given distribution circuit, the time that circuit reaches peak demand, and the size of the solar installation.

But broader solar deployment won't be without complications. Statewide, the systems are pumping electricity into a grid that at times is already nearing full capacity. The output also varies day to day, and the panels stop producing at night.

"I don't think it's a deal breaker by any means," says RIT's Raffaelle.

Some of the grid technology will have to be updated, he says; the state Public Service Commission is looking into how to do it.

Raffaelle says that the power's variable nature can also be offset by utility-scale energy storage; think very large batteries and fuel cells. The storage systems could help smooth out peaks and valleys in demand and production, he says, and some big electric industry companies are already "going great guns on storage," he says.

In the big picture, centralized, always-ready power supplies will still be necessary to meet consumer demand. Technologies such as solar and wind power, combined with energy efficiency measures, will help reduce the amount of power those plants need to supply.

Penfield Supervisor LaFountain says he knows that people are skeptical of solar technology, and wary of the expense.

But the cost of solar power equipment — not just panels, but the equipment necessary to make the generated electricity usable — has dropped. So have installation costs.

Schulte, of Sustainable Energy Developments, explains the decrease in terms of cost per watt. A decade ago, solar systems cost around $8 to $10 a watt after installation. Now the cost is heading toward $3 per watt. And the incentives take a large bite out of those costs, he says.

Schulte says that the size of an average household system is 7 kilowatts to 10 kilowatts. On average, a system of that size with installation would cost approximately $24,000 to $25,000 before incentives, he says. But a 30 percent federal tax credit would mean a rebate of approximately $7,200; a state tax credit would provide an additional $5,000 rebate; and NYSERDA incentives would take another $7,000 off the cost. The NYSERDA incentives are finite, and they're first come, first served. But they're also renewed every year.

Kanauer says that state and federal tax credits and incentives can, in many cases, knock the costs of a system and its installation down to one-quarter of the sticker price.

And the incentives shorten the time it takes buyers to recoup their investments.

Solar supporters say that it's the increasing demand and growing market that's driven down photovoltaic system and installation costs.

After tax credits and incentives, Cavaliere ultimately paid $4,500 for her system, including installation costs. And she says she expects it to have paid for itself in nine years.

"It was probably more affordable than we would have expected," she says.

And electricity consumers interested in solar increasingly have other arrangements they can use. Power purchase agreements are one, leasing a solar system is another.

One other question often comes up with residential solar, and that's how having a system affects a house's value. But there's no real consensus on whether it adds or detracts. Some buyers will undoubtedly see it as an asset, while others may not.

If solar's costs are going down, are the incentives necessary?

That question will almost certainly be debated at the national level in the near future. The federal tax credit for solar expires in 2016, and Congress will have to decide whether to renew it.

New York is also developing a plan to phase out its incentives, but wants to first make solar a competitive energy option for consumers, businesses, governments, and institutions. Under the state's approach, the incentives would be gradually reduced as the state's solar industry hits certain cost targets.

That approach makes sense, and is an appropriate way to incentivize the industry, Schulte says. It lets people in the industry know what to expect while they try to build their businesses and sell their products and services, he says.

Solar might not be catching on if not for the subsidies, though, and some form of basic incentives or assistance might be necessary in the long term. Schulte says it boils down to the need for a level playing field.