It's all warm breezes and cold cocktails for the next few months. Whether you're setting up the bar at home or venturing out on the town, we've got some summer cocktails ideas for you to try. We asked a few local bartenders about their favorite warm weather refreshment and have even included the recipes so you can make it at home.

Do you have a favorite summer cocktail or know a place that serves a great one that we haven't listed here? Leave it in the comment section below this story online at rochestercitynewspaper.com.

Andrew Kern, the bar manager at Lovin' Cup (300 Park Point Drive), says his ideal summer cocktail is the American Beauty, or as he likes to call it, a "rich man's whiskey sour." The cocktail is made up of two parts Rittenhouse Rye whiskey (if you don't have Rittenhouse at home, you can use any rye whiskey), and one part each of lemon juice and honey, shaken hard and poured over rocks with a lemon twist. "I'm a whiskey drinker by nature," Kern says. "This has a lemonade type feel to it — you get the lemon, you get the sugar, but in the end you get the booze, which is the most important part." Lovin' Cup has a new summer drink menu available and large patio for drinking a cold cocktail on a warm night.

Dan Kajdas from Cheshire (647 South Avenue) calls the Mint Julep "the most refreshing way to get bourbon into your body when it's hot out." To make his version, you'll need crushed ice — if you don't have a Lewis Bag (a canvas bag used to crush ice) you can use a Ziplock bag wrapped in a kitchen towel and something heavy to crush the ice with, a mallet or a muddler will do just fine. Take four to five mint leaves and muddle them with a half-ounce of simple syrup. Be sure to muddle enough to release the oils from the mint, but not enough to shred the mint (there's nothing worse than sucking up tiny pieces of mint in your straw). Put the ice in the glass, pour in two ounces of bourbon and then top if off with another three quarters of an ounce of simple syrup. "If you layer it correctly, you can take a different sip every time you drink it," Kajdas says. "If you want to take a sip that's really strong, you can. If you want a sip that's a little bit sweeter, you can just lift your straw up and hit that sweet spot."

I asked Kajdas if it mattered what bourbon is used for the Mint Julep – Cheshire uses Elijah Craig because it is a high-proof, spicy bourbon. The Mint Juleps served at the Kentucky Derby are made with Woodford Reserve, but Kajdas suggests to use whatever your favorite bourbon is, and if you're on a budget, Evan Williams Black Label will work just fine.

Storm Keas from Lento (274 North Goodman Street, Village Gate) spent years living in Maui, so I knew that his love for pineapple was strong and that his pineapple-infused bourbon, the Latrice Royale, was going to be killer. The Latrice Royale — named after a former contestant on "RuPaul's Drag Race" — is "chunky yet funky, large and in charge, and you too will be at peace with this glass of Latrice," Keas says. Keas cuts slabs of pineapple and brushes them with grapeseed oil, then grills them aggressively so that a lot of carbon is formed as well as caramelized sugars. He then does a 72-hour infusion with bourbon. "I've tried various levels and price points and found that there is no real benefit to using bourbons above a certain tier," Keas says. The infused bourbon is served on the rocks with a wedge of pineapple and a sprig of mint.

The Latrice Royale is definitely a sipper, so if you're looking for something a little lighter, another of Keas' favorites is his version of a Granita, made with Prosecco and sorbet. He makes his own sorbet; the one he used for my Granita was a Meyer lemon, lychee, and apple mint. To make at home, pour a glass of Prosecco (he uses Lamberti Prosecco) into a wine glass and drop three melon-ball sized dollops of sorbet (your favorite store bought flavor, if you don't feel like making your own) into the bottom of the glass. "The sorbet acts as a heat sink, it keeps the sparkling wine very cold and melts as you drink it," Keas says. If you decide to channel your inner Ina Garten and make your own sorbet, make sure to pass it through a few strainers in order to eliminate textural variations that can cause the sparkling wine to effervesce and overflow, leaving you with a mess — and flat wine. 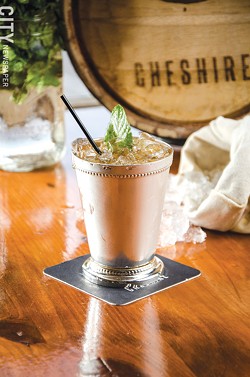 If there is an authority on cocktails on the beach in Rochester, it is Francine Beth, owner of Marge's Lakeside Inn (4909 Culver Road). Marge's is famous for its frozen concoctions, especially the margarita and the Rum Runner made from the bar's own mix. Beth's favorite is the Rum Rita, a mixture of both. You can add a "bump" or an extra shot served in a test tube to your frozen drink if you feel you need it, which you probably do. Have you ever been served a drink in a fishbowl? If not, then you haven't lived, my friend. The Malibu Fish Bowl is available from 2 to 6 p.m. and is a combination of Malibu Coconut Rum, Malibu Island Spiced Rum, cranberry, sour mix, and a splash of lemonade. In addition to the bar inside, Marge's also has a Tiki bar out on the beach. Marge's summer hours are Monday through Friday, famously opening "around 5," and Saturday and Sunday, opening "around 2."

Talking about Tiki, The Revelry (1290 University Avenue) now hosts "Tiki Tuesdays." Bar manager Zack Mikida's favorite Tiki cocktail is the Devil's Door. Served in a glass that resembles the cursed idol from the Brady Bunch's Hawaiian vacation, the Devil's Door starts with crushed ice, prepared in the same fashion as the Mint Julep. The cocktail is prepared with one ounce each of light and dark rums, a half-ounce each of fresh-squeezed lemon and lime juice, three quarters of an ounce of dry Curacao, and a few healthy dashes of Angostura bitters. Add all ingredients to a shaker with some ice, give it a nice hard shake, pour into the glass of your choice, and pour a ginger beer float on top. "It's very refreshing," Mikida says. "The idea of Tiki is supposed to be tropical, sunny, hanging out on the beach, shades, shorts and a ridiculous Cabana shirt — this drink embodies that." If you're interested in more Tiki drinks, there's an app that Mikida highly recommends, the Beachbum Berry's Total Tiki app that lists more than 200 Tiki-style drinks.