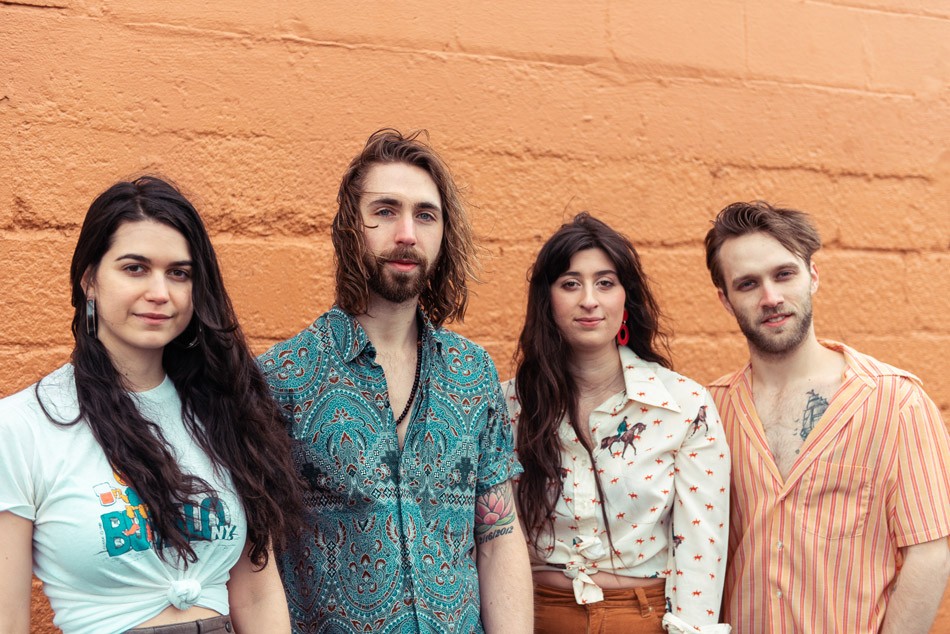 The Rochester art-folk group formerly known as The Sugar Gliders has been making headway in the local music scene with its irresistible, heart-melting lullabies. The main duo consists of guitarist-vocalist Roxy Elahi and banjoist-vocalist Alison Lindsey. Recently, Elahi and Lindsey decided to add their friends Ryan Yarmel of Yarms on bass and Zach Kochan of Great Red on guitar. Delivering an insatiable mixture of blues-folk covers and originals, Sugar Glider has a sound that resembles the acoustic, folk-country stylings of the Vermont trio Mountain Man, with tinges of The Everly Brothers.

Elahi and Lindsey naturally have a lot in common, both having grown up in West Irondequoit in very musical families. They even went to the same grade school. It wasn’t until later in high school that the two actually got to know each other: “We met in art class in 10th grade,” Lindsey says. “We hung out once. Roxy’s dad drove us to see Rusted Root at Water Street Music Hall, and we didn’t hang out again until three years later.” Now, Elahi and Lindsey are best friends and are both celebrating their recent graduation from RIT, with degrees in Ceramics and Graphic Design, respectively.

The duo met Yarmel and Kochan during a gig last summer. “We had mutual friends and had played a show together at The Spirit Room,” Elahi says. “A few months later, Zach and Ryan asked if we wanted to play music together and we said, ‘Heck, yes.’ The rest is history.”

As far as the curious band name, Elahi and Lindsey would jokingly change what they called themselves at each show they played, until something eventually stuck. “We’d experiment with goofy band names at open mic nights, and this one was our favorite,” Lindsey says. “We tried just Sugar Gliders but we decided we needed the ‘The,’ ” Elahi adds.

Having just experienced the ultimate band name nightmare after discovering another group from the 80's with the same moniker, the Rochester band has recently updated its original name from The Sugargliders to Sugar Glider, for future clarity's sake.

As visual artists at heart, Sugar Glider recognizes the influential correlation between music and art. “There is a thread that runs between them, even though they are different forms of expression,” Elahi says. “It’s like saying the same thing in a different language.”

Gaining lyrical inspiration by observing their own lives and the work of other artists, the members of Sugar Glider find ways to expand small instrumental motifs or lyrical phrases into flowing, stream-of-consciousness works of art. When asked what musical influences would surprise their acoustic folk audience, Lindsey cites Cardi B and Motörhead.

Sugar Glider's full quartet is equally as vibrant as the original duo, emitting a friendly chemistry that's palpable in each note. Before each performance, the group comes together for a drink and some quality time with each other. As Lindsey puts it: "Usually we need to make a last-minute setlist. We also hydrate, furiously."

In addition to keeping busy with their last semester at RIT this past spring, the musicians of Sugar Glider have also been working on a debut, full-length studio album , which is expected to be released at the end of June. Entitled "Steal Your Heart," the new album was recorded at the South Wedge Mission by Ben Morey over the course of about three months and features the full quartet. The album's title comes from a lyric in the band’s song "Witches." “The song is about coming to a realization of personal power," Lindsey says. Many of the songs on the album were written in the summer of 2017. "We were both going through some life transitions,” Lindsey says, who refers to the songs as “a string of anecdotes about self-discovery."