What you are about to read is real. The participants are not actors.

They are actual litigants whose dueling claims in Rochester City Court over a collision involving a car and a bicycle on Culver Road made international news.

Both parties have agreed to drop their claims and have their cases settled before Judge Marilyn Milian, in her forum, “The People's Court.”

The cyclist, Bryan Agnello, and the driver who hit him, Jovonte Cook, are scheduled to have their dispute heard on the reality television show on Thursday, March 19, in Stamford, Connecticut. An air date for the episode has not been set.

A producer for the show contacted the litigants last week after their story appeared in CITY and was subsequently picked up by other news outlets and widely shared on social media. The producer declined to comment and Cook did not return multiple messages.

Related Cyclist gets hit by car, then sued for $700

Cyclist gets hit by car, then sued for $700
Cyclist Bryan Agnello was blindsided twice by the same motorist. First, when the driver rear-ended him. Then, a month later, when the driver sued him for $700 damage to his car.
By Jeremy Moule
News
But Agnello said the producer told him Cook had agreed to appear. Agnello also provided paperwork the show sent him informing him that their case was on the docket and that the show would cover their costs for travel and accomodations, and would pay any settlement.

The story of their collision and the aftermath, which involved Cook suing Agnello for $700 in damage to his car, sparked outrage and debate about bicycling safety in the cycling community and beyond.

Their collision occurred on Culver Road near the Route I-490 interchange in January when, according to police, Cook, who was driving a Ford Fusion, rear-ended Agnello, who was on his bicycle on the left side of the north-bound lane and slowed to make a left turn onto a side street.

Agnello, who had a blinking red light on the back of his bike and was wearing reflective rain gear, was flung onto the hood of the car, but escaped serious injury. His bicycle was mangled.

A month later, however, Cook brought a small claim against Agnello, who, in turn, filed a counterclaim for $2,500 to cover the cost of his destroyed bicycle, the time he spent recuperating, and the aggravation.

Agnello, 37, said he agreed to appear on “The People’s Court” because it was “for both parties the best option.”

“If I were to handle this in small claims court, there's a chance that I would never see any actual judgment,” Agnello said. “There’s a chance it would go by the wayside and nothing would ever come of it. This way, I've got national coverage, people get to see who did this to me, and the show pays the judgment. That way it will be over. It’s like putting the ribbon on it.” 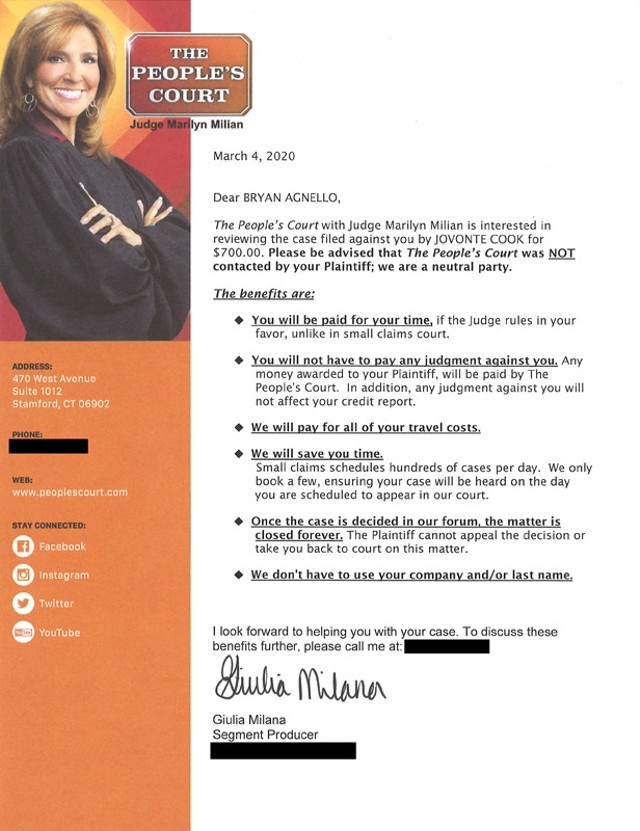 Cook, who was not ticketed or charged as a result of the collision, has offered versions of the event that vary from the police report.

In his court filing, Cook stated that Agnello was riding his bike on I-490 at about 60 mph and that he “didn’t see him coming at me at all due to bad weather.” It was raining when the collision occurred.

During an interview with CITY, Cook estimated Agnello was traveling 80 mph and “came out of nowhere and splashed on my front windshield” while Cook was driving on I-490 while on his way to his job delivering pizzas.

For perspective, elite track cyclists max out at around 60 mph on velodromes designed for speed. Riders in the top classes of Rochester’s Twilight Criterium peak at just over 30 mph on the city’s flat streets.

"I know people are going to criticize me for making this decision,” said Agnello, a senior broadcast engineer at WXXI, a media partner of CITY. “I feel that the nation being able to see him and this behavior he has exhibited is worth more than a ticket will ever be.”