December 01, 2019
The United Nations recently issued a bleak report on climate change that found countries have failed to halt the rise of greenhouse gas emissions, despite warnings from scientists.

The Emissions Gap Report, produced by the United Nations Environment Program, revealed that every single country that signed the 2016 Paris climate agreement has increased its emissions, instead of cutting them back, with China and the United States being the worst offenders. 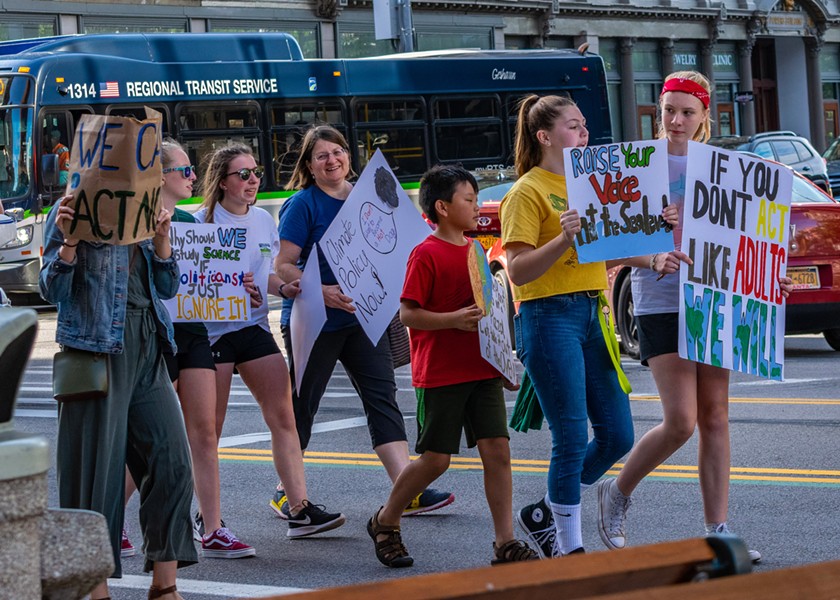 As a result, the authors wrote, “deeper and faster cuts are now required.”

That is exactly the message that Rochester-area students will convey on December 6, when they intend to walk out of their schools and join a global climate strike. In a news release announcing the action, the students said the walkout would happen “in protest of continued government inaction on the climate crisis.”

Brighton will serve as the anchor of the strike. Students from the Brighton middle and high school — including members of the Brighton High School Climate Club — are slated to march to Twelve Corners at 3 p.m. There, they’ll be joined by members of the following groups: Rochester Youth Climate Leaders, New York Youth Climate Leaders, Webster Thomas Earth Club, Rochester Earth Guardians, Honeoye Falls-Lima Green Team, School of the Arts Green Crew, and McQuaid Climate Club.

The event is open to anyone concerned about climate change.

The young climate activists said they want to propel the momentum created by the global climate strikes in late September. Rochester’s September 27 demonstration drew more than 1,000 people of all ages.

While the recent UN agency report paints a troubling picture about emissions, it also strikes a couple of notes of hope. It points out that in September, after the UN secretary general’s climate action summit in September, 65 countries and “subnational economies” committed to achieving net-zero emissions by 2050. The Trump White House has been dismissive of climate change and hostile toward efforts that would reduce emissions. Administration officials barely participated in the summit and President Donald Trump has moved to withdraw the US from the Paris agreement.

But New York state, which has an economy roughly the size of South Korea’s, passed laws requiring utilities to provide increasing amounts of renewable and carbon-free power, and setting a target for the state to achieve net-zero emissions by 2050.

The UN report also mentions “encouraging developments” taking place. One of them: “the political focus on the climate crisis is growing in several countries, with voters and protestors, particularly youth, making it clear that it is their number one issue.”

Rochester-area youth are among those making it clear that climate is a priority issue for them.