Peter Lang comes back to the guitar 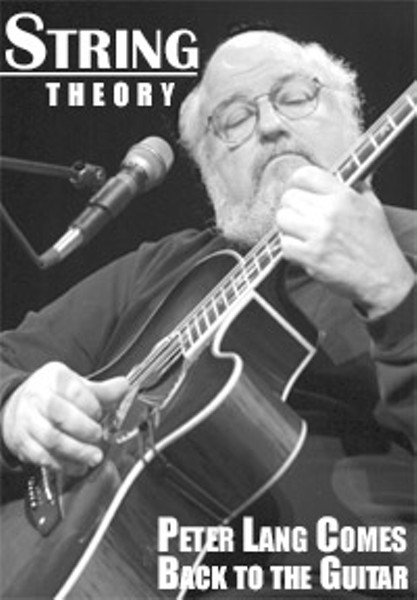 Of all the genres spawned by blues and folk music in the 1960s it would be hard to find one more inventive than that of the acoustic guitar instrumental. It was unmistakable on free-form radio: the bright, full, ringing chords, the impossibly complicated finger picking with the occasional harmonic chimes, backed by a throbbing bass pattern on the low strings. And all of it played by one human being with just two hands.

The two best-known practitioners of this art were John Fahey and Leo Kottke. But there was another great guitarist on Fahey's Takoma Records label. His name is Peter Lang, and after a couple of decades of absence from the scene, he's back, recording and touring. His recent albums, Dharma Blues and Guitar, leave no doubt that his chops are intact.

Lang traces his interest in guitar picking back to the folk boom of the early 1960s. He would get together with friends in Minneapolis to have a little hootenanny.

"One of their older brothers walked in," says Lang. "He said, 'I cannot stand this. This is making me crazy. This is not folk music.'"

He insisted on taking them to the Coffee Break at the University of Minnesota where they would see "guys playing real folk music." The guys were Dave "Snaker" Ray, Tony "Little Son" Glover, and "Spider" John Koerner, white college students hooked on blues.

"It shocked me," says Lang. "There was so much power. They had a huge influence on people. Dave Ray was the guitarist who I modeled my finger picking style after. He showed me my first open tuning."

Lang learned something from each.

"John Hurt's style is very simple but it's one of those deals where less is more," he says. "Every time I practice I play one of his tunes. Blind Blake was very sophisticated and Reverend Gary Davis was also phenomenal."

In the late 1960s Lang went to Los Angeles to see if he could make a go of it as a folk singer/guitarist. He'd arrived too late. "They were looking for pop stars."

So he enrolled in college and studied epidemiology. But not before circulating some tapes. One of them found its way to Takoma records and owner John Fahey liked what he heard.

Lang traveled to Takoma Park, Maryland, where he recorded a demo and was promptly signed. An associate of Fahey gave him a stack of Fahey records.

"He said, 'you have to listen to all of these and learn the names of the songs. You'll be tested.' They were joking," he says, "but I was like the Minnesota kid who had just fallen off the pumpkin truck. I put the stuff on and said, 'Wow, how did this guy fall through the cracks in my world?' It was like an epiphany."

Lang had a record coming out but in the meantime he didn't have a job, so Fahey hired him. He became "king of the mailroom."

Kottke was already turning heads on Takoma. So it was the ultimate honor when in 1974 Takoma released an album simply called Leo Kottke, John Fahey & Peter Lang.

By the 1980s Lang's career had begun to slide. He attributes part of this to the homogenization that began to take hold on the radio and continues to this day.

"I firmly believe you wouldn't have seen a lot of the bands that came out of the 1960s if they had to face what's on the radio today," he says. "They wouldn't have gotten airplay and probably would have ended up being bakers and insurance salesmen."

He took a couple of decades off from recording and performing. Although he continued to play, he concentrated most of his energy on his family and running an animation studio.

Now he's back to the guitar, full-time, writing every day.

"I'll just start improvising around something. I'll find an interesting chord and then see if I can find one that fits with it," he says. "It's kind of like building with Legos. I work almost exclusively in open tunings. You throw the guitar into a different tuning, all the rules are gone. It's kind of like painting with a blindfold."