Sticking it to the 19th Ward

Brooks Landing has been on the table for 20 years 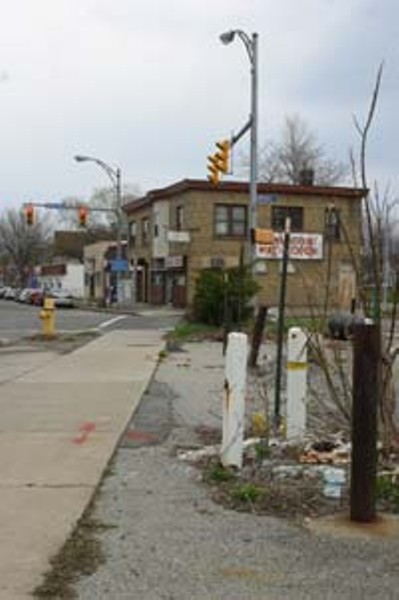 The long-awaited transformation of the city's 19th Ward could be right around the corner. But Adam McFadden has heard that before.

"There are a lot of us pissed off about this; the fact that the state keeps throwing obstacles in our way," he says. "There seems to be somebody playing political games, to be honest with you."

McFadden, who represents the South District on City Council, is castigating the state Office of Historic Preservation. The agency has been reviewing the Brooks Landing development project for about a year.

The $17 million project is concentrated in the area of Brooks Avenue and Genesee Street in the 19th Ward. Plans include development of an extended-stay hotel and restaurant complex, office building, retail space, and coffee shop.

In one form or another, the project has been on the drawing board for 20 years. Dana Miller, chairman of the Sector 4 Community Development Corporation, has been involved the entire time. Nobody, he says, will be happier than him to see the project finally take off.

"There might be somebody, but I don't know who it would be," he says. "I'd certainly be more than happy to be finished with this project."

Since a portion of the project will be on what is technically --- if not practically --- park land, the city needs to get approval from the National Park Service. The park service delegates the responsibility of vetting the project to the state Office of Historic Preservation. The office will eventually make a recommendation to the feds.

"I know sometimes it could be frustrating, but our concern is to make sure that whatever historic resources are there are protected," says Cathy Jimenez, spokeswoman for the state office.

But McFadden and others say the state is constantly moving the bar. As soon as one set of criteria is met, he says, the office comes back with new concerns.

"Recently we just got back a whole list of other stuff they want us to do. And from what I hear, the mayor was livid about that because we have basically changed our development a great deal to accommodate whatever their concerns were," McFadden says. "At this point we've accommodated all of the idiotic things and thought we were in the clear. This is just somebody getting their jollies sticking us."

Vacant buildings line Genesee Street --- a reminder of the area's past and promised glory. Advocates say the Brooks Landing project will put a "face" on the neighborhood. The intersection of Brooks and Genesee, they say, doesn't reflect the area's true nature.

"We desperately need something like this to show to the rest of the Rochester and Monroe County community who we really are," says John Borek, director of Sector 4 Community Development Corporation. "The area, as it exists now, just doesn't show the quality of the neighborhood behind it --- the housing stock and our general middle-class nature."

The 19th Ward, Borek says, is the most undervalued neighborhood in the city of Rochester.

"I can quote statistics all day long to justify that," he says. "It has an extraordinarily high income level. It has 1,500 UR [University of Rochester] staff and students living there. It has the highest per capita number of African-Americans with PhDs and advanced degrees in New York State. The list goes on and on. And yet, that intersection looks like it does."

Brooks Landing will come to life in three phases. The first is the hotel and restaurant complex. The 80-room, five-story hotel will be on what is now Plymouth Avenue behind the NET [Neighborhood Empowerment Team] office at 998 Genesee Street. (The NET building will be demolished and relocated.) That piece of Plymouth Avenue will be eliminated.

"The remainder of Plymouth Avenue, all the way back to Elmwood, will remain open," Miller says. "It will continue from Elmwood Avenue down to where the project starts. There'll be kind of a loop built that will allow people to drive in off of Elmwood and utilize all of the park amenities."

So motorists can drive in, use the park, and take the loop back to Elmwood. Or, there will also be a connection to the hotel's parking lot so drivers could continue on Plymouth Avenue or head out on Genesee Street.

"We had a lot of concern that having the ability to drive along the waterfront was a valuable thing," Miller says. "So one of our concerns was, we'd like the road to stay there, but we'd like it to be more a park road and less a part of a highway system."

Making drivers cut through the parking lot will slow traffic down, Miller says, while not preventing motorists from continuing down Plymouth.

"It's a lousy experience, not to mention dangerous," he says.

The second phase of Brooks Landing is a two-story building with retail space and offices for the University of Rochester. The third is the creation of Brooks Urban Village, which is the development of adjacent areas of Genesee Street, including a coffee shop at 953 Genesee.

Everything is projected to be completed by fall 2005, Borek says. That may still be a "useable" timeframe, he says, even with the latest demands from the state.

There will also be a new boardwalk with boat docking facilities. Commemorative bricks are already being sold for the walkway.

The state Office of Historic Preservation sent the city a letter this month, laying out everything that needs to be done to get the project moving. The main sticking point is the preservation of open space.

"They keep looking for ways that you might rearrange the pieces of the puzzle such that less land is utilized for development and more land is retained as park land," Miller says. "Their concern is how can we maintain as much of the character of the current environment as possible, so they're poking at things like building locations and how big does the parking lot really have to be...."

Jimenez acknowledges that open space is the state office's primary concern, but there are other questions, too, about whether the project requires an environmental impact statement or an archeological review.

"It has been an ongoing discussion," she says. "We're hoping to meet with them [the city] to bring this to a resolution so that they can move forward with their project."

Since federally funded park lands are involved in this project, there are very strict federal guidelines to meet before the land can be used, Jimenez says.

Miller agrees with McFadden. The city, Miller says, has done "a tremendous job of trying to handle these continuing requests for information" from the state.

"Our sense at this point is that we've probably answered all of the questions at least once, some of the questions many times, and it would be nice if we could get this thing moved forward," he says. "The community welcomes the project with open arms."