"State of the City" 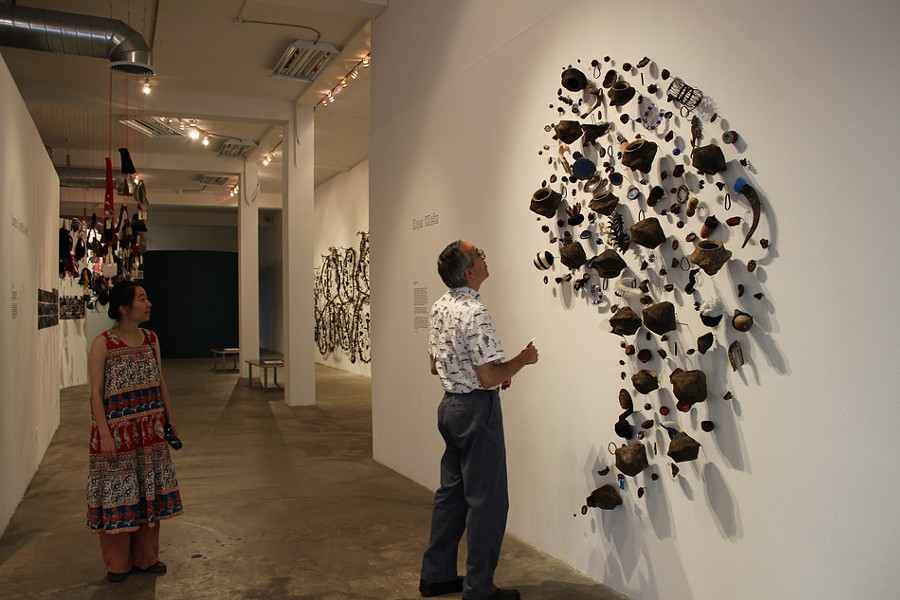 The work of a gallerist is never done. Immediately following the de-installation of Rochester Contemporary's annual "6x6" fundraising exhibition — which required the patching of tens of thousands of thumbtack holes — the staff at Rochester Contemporary went and put hundreds more pinholes in the walls, in order to present the massive installations featured in the annual "State of the City" exhibition. This year's iteration of the annual series includes work by The Shua Group and Ron Klein, each of whom explore the concept of appropriation in their work.

This common thread is manifest in the work of Laura Quattrocchi (of The Shua Group) overtly in the massive installation suspended from the ceiling in the front of and at the center of the gallery. "Lost Collection" is exactly what it sounds like: a grouping of items dropped in and collected from the streets of Jersey City, New Jersey, and New York, New York. Each item that Quattrocchi found and saved dangles overhead from the end of a red cord, accompanied by a cataloging tag which specifies when and where the item was found.

Within "Lost Collection," two distinct categories of items we lose the most emerge. The first is accessories, dominated by winter gear — lots of hats, scarves, and gloves — but also includes a gold wedding band. The other group features stuffed animals, binkies, and other things that babies might drop or throw to the ground. Rows of snapshots of the accidental castoffs indicate where they were found. By positioning the items just barely overhead, they become impossible to disregard, and are literally elevated from their status as visual white noise of the urban landscape to objects locked in limbo.

In contrast with the unaltered, personal ephemera in Quattrocchi's work, Klein's collection is the product of a mad tinkerer who's created hybrid objects through combining seed pods and fruit husks and with plastic bristle brushes, for instance, or pinecones haloed by toy tires. The dense, harmonious field of objects is suspended in a way, with thin pins securing each of the objects to the wall, casting shadows to add yet another layer of curious complexity.

Klein spent two days installing his site-specific work, "Twisted Ladder," which riffs on the double helix structure in our DNA. Here, countless thorny shells of a cousin to the water chestnut are strung on wire that wends along the wall, woven here and there with corks caught in hexagram-shaped netting. Within each loop form, a series of repeating objects is pinned to the wall, looking for all the world like single-celled specimens in a magnified drop of water. Rings of dice resemble chains of bacteria, vacuum belts and seed pods are diadems, or stand in for the trillions of tinier components of a complex organism. As with "Melody Maker," Klein dipped some items in rich blue, white, and black encaustic wax to give the objects the moist-looking sheen that the artist says coats everything in the rainforest.

Video components to the exhibition further explore the artists' work. In "Looking Down," 11 minutes of quick vignettes take us into the jungle with Klein as he sources his raw materials and lives off the land with a guide amid predators and swarms of insects. Klein eagerly whirls the camera about, dragging it audibly down the thick spines lining a tree's bark, zooming in on industrious ants, and otherwise drinking in the sights and sounds of the remote Iwokrama rainforest in Guyana. Klein's work is a mental oscillation between micro and macrocosmic considerations, between the order and chaos found in both the jungle and the city, and whether the unmolested flow of nature or the anesthetized environment of human civilization best defines the word "pristine."

The Shua Group's "Spring Rain" is a video of Quattrocchi's solo performance piece in a brightly lit interior, seen through a massive window from the dark street of a shopping district. The artist moves gracefully to the hollow bops of plastic bottles falling, navigating the tumbling waste, shoving them aside, wading as they accumulate, and eventually using the sill to launch herself backward, in the attempt to distribute her weight atop the shifting pile of plastic. This work alludes to the ubiquity of these objects in our lives, and our difficultly with staying on top of the mountains of plastic we produce and discard.

Close to the front of the gallery space, The Shua Group's (with Brussels filmmaker Sylvestre Gobart) video, "Landed," explores the appropriation of space, with more than a subtle poke at gentrification. An affluent-looking couple (Joshua Bisset and Laura Quattrocchi) arrive in Detroit by moving into the space between four upright tires and squatting. Throughout the series of brief scenes that follow, the pair move like aliens through the streets, seeming to study and test out the environment with silent certainty, their subtle yet imposing presence visibly unsettling the people and animals already living and struggling there.