March 14, 2020
Monroe County Executive Adam Bello on Saturday declared a state of emergency and ordered all public schools closed, as more details about the second confirmed case of coronavirus in the county emerged.

Bello said the declaration gives his administration more flexibility in dealing with the virus. 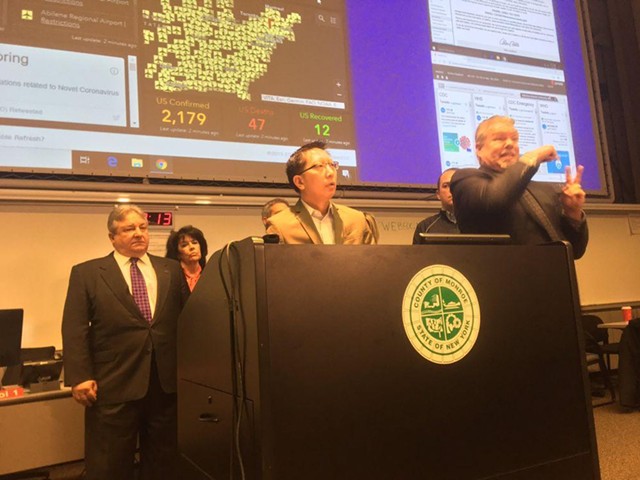 Officials on Saturday announced that the second case involves a woman in her 60s who is currently at Unity Hospital in stable condition.

County Health Commissioner Dr. Michael Mendoza said there was no indication of travel being a factor, so it is believed the woman’s case is the first one involving local transmission in the county.

Officials said the woman started showing symptoms on March 4 and that she had gone to work at Arcadia Middle School when the symptoms were still mild.

Bello followed his state of emergency declaration a few hours alter with an order to close all public schools until further notice. In a prepared statement, Bello said he gave his order after consultation with Mendoza and the superintendents of all 22 school districts in Monroe County.

"Each individual school district will share more specific information regarding their plans for food, social supports, remote instruction, and other operational procedures with their individual communities," Bello's statement read in part. "THe Monroe County Health Department and school leaders will be review this on a week-to-week basis — and providing an update by midday Friday (March 20)."

The statement went on to read that the city of Rochester will announce efforts regarding food distribution and support for children and families on Sunday at 10 a.m.

After the order, school districts followed up with messages to their families, urging them to make plans for child care.

"This is uncharted territory for our community and our nation," said Rochester Superintendent Terry Dade in a prepared statement. "It is also an opportunity for us to come together and support one another".

In a email to parents and guardians of school children, Fairport Superintendent Brett Provenzano said, "We are in unprecedented times."

"We continue to learn and collaborate with Monroe County officials and local school districts to move forward thoughtfully," he said.


Health officials are trying to determine who the latest patient came in contact with both before and after her illness.

Brett Dahlberg is a health reporter at WXXI, a media partner of CITY. He can be reached at bdahlberg@wxxi.org.