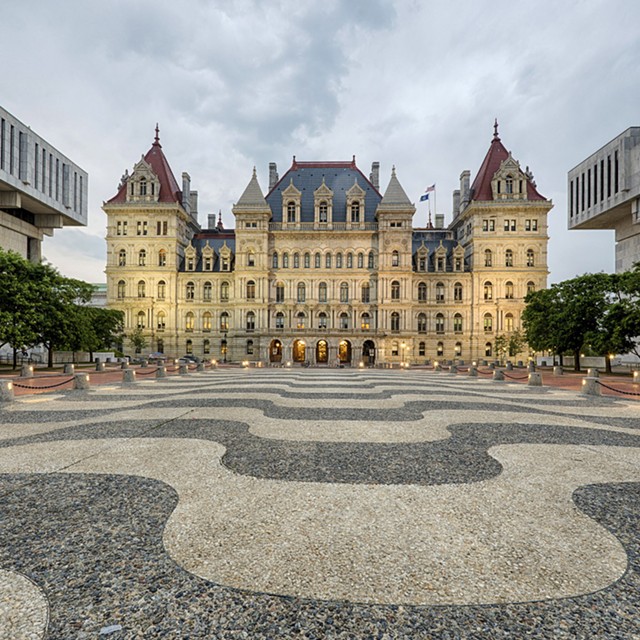 Six days after it was due, Gov. Andrew Cuomo and New York State’s legislative leaders announced a final agreement on a $212 billion budget deal. It increases taxes on the wealthy and adds funds for schools, renters and small businesses — including restaurants — that struggled financially during the COVID-19 pandemic.

The Senate and Assembly held a marathon session that was expected to last well into Tuesday night to approve the budget bills.

The budget increases taxes on the wealthy and corporations by $4.3 billion when fully implemented, with an increase in the personal income tax rate on New Yorkers making more than $1 million — from 8.82% to 9.65%. It adds two new higher tax brackets — 10.3% for those making over $5 million, and 10.9% for those earning over $25 million. Corporate franchise taxes will also be going up, from 6.5% to 7.25%.

Assembly Speaker Carl Heastie, in a statement, said the new taxes, along with other actions in the budget, address inequities that have existed for too long.

The new tax increases, combined with local tax rates, will result in New York having the highest tax rate in the nation.

Andrew Rein, president of the fiscal watchdog group Citizens Budget Commission, said, in a statement, that “the tax increases simply are unnecessary and economically risky,” and provide incentives for wealthy New Yorkers to leave the state.

The state received $12.5 billion from the recently enacted federal stimulus package, and $10 billion more in federal dollars is going directly to local governments. Rein says the federal aid should have been sufficient for the state to balance its budget and plan its spending going forward to avoid future deficits.

Part of the revenue from the new taxes and the federal aid will be used to create a $2.4 billion rent relief program to help renters who lost jobs during the pandemic and have fallen behind on rent. Those with qualifying incomes would be eligible to up to 12 months of rent payments, retroactive to March 2020, and three months of future rent payments.

Struggling small businesses that were harmed during the state-mandated shutdowns will have access to $1 billion in funding, with $25 million going to help restaurants hard hit during the pandemic.

School aid will increase by $3 billion to $29.5 billion dollars. There is also a plan to provide enough money to finally fulfill a 2006 order from the state’s highest court to spend more money to guarantee every child’s constitutional right to an adequate education. The order is from the the Campaign for Fiscal Equity case, and the plan will be fully funded by the 2023 school year. The plan made Jasmine Gripper, who leads the pro-school funding group Alliance for Quality Education, jubilant.

The budget also freezes tuition at SUNY and CUNY schools, and increases awards for the Tuition Assistance Program by $500 to $5,665.

Cuomo sought a lower level of spending and just a fraction of the tax increases in the final budget. The new budget spends 9% more than last fiscal year. Cuomo, during a decade in office, limited spending growth to around 2% per year. The governor wanted a $2 billion dollar tax package, which would raise taxes less steeply on the wealthy, and postpone a middle-class tax cut.

Cuomo normally holds a lot of power in the budget making process, but he was at a disadvantage during talks this year as he struggles with four major scandals. They include sexual harassment charges by multiple women, and a federal investigation into whether he and his top aides hid the total number of nursing home residents who died during the pandemic. There are also questions about whether the governor gave family and politically-connected associates improper access to COVID tests, and whether Cuomo broke the state’s Public Officers’ Law by having staff help him write a book about managing the pandemic.

Senate Majority Leader Andrea Stewart-Cousins has called for Cuomo’s resignation, Assembly Speaker Carl Heastie launched an impeachment inquiry. But Cuomo put his best face on the plan in an event at the Javits Center vaccine site in New York City.

“We’re working on a budget up in Albany that’s going to be the biggest and best action plan for the state of New York ever,” Cuomo said.

The governor did not offer details, and the event was closed to media, so he did not answer any questions.

The budget also includes a plan to make high-speed internet available and more affordable to those in urban and rural areas; the expansion of mobile sports gambling, creating an estimated $500 million in annual revenue for the state; an additional $2.4 billion in funding for child care subsidies; and $1.84 billion for environmental projects, including $500 million for clean water infrastructure and $300 million for the New York State Environmental Protection Fund.