One of the earliest known "festival theaters" was held in Stratford-Upon-Avon in 1864, to commemorate the three-hundredth anniversary of Shakespeare's birth (or at least, the approximated birth). From there, it was more of a Canadian tradition than American; passed along through British settlement and heritage. Each summer, Rochesterians have the opportunity to enjoy several high-quality, professional incarnations of festival theater, both in state and over the border. And the best news: some of them are a doable daytrip away. 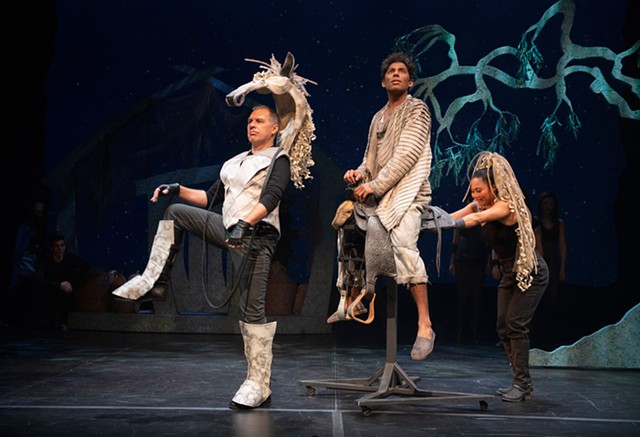 Each summer, the idyllic, lakefront Merry-Go-Round Playhouse comes alive with song and dance in a full season of classics and new works. Among the highlights this year are the musicals "Grand Hotel" (July 10-31), the winner of 10 Tony Awards based on the Greta Garbo film set in 1928 Berlin, and "Loch Ness, A New Musical" (September 28-October 18), a family-friendly production featuring a mix of puppetry and ensemble storytelling. Other notable highlights include "The PiTCH" (July 17-August 16) at the nearby Carriage House Theater, which grants musical creation teams a weeklong residency to workshop and pitch a brand new musical to a live audience for feedback. And of course, no trip to Auburn is complete without a visit to Prison City Brewing, which consistently ranks high in national brewing taste tests.

According to the festival website, it "celebrates the life and spirit of Bernard Shaw by creating theatre that is as entertaining and provocative as Shaw himself." This year, that celebration will feature another C.S. Lewis creation, "The Horse and His Boy" (through June 26), and mounts the little-performed Scottish musical "Brigadoon" (through October 13). On the lighter side is "The Ladykillers" (June 11-Octover 12), a comedic murder mystery, and Mae West's "Sex" (June 21-October 13), a comedy that landed its author in handcuffs for "corrupting the youth."

Shaw Fest is also in its third season of "Secret Theatre," a pop-up program that takes place at secret locations around NOTL (audience members sign up for email alerts to attend). There are two Christmas shows in November and December: "Holiday Inn" and the always-popular "A Christmas Carol." While the drive isn't long, it's always worth staying the night to see more than one show, as well as tasting the wares at nearby wineries and shopping along Queen's Parade.

Just beyond the charming streets of Cooperstown is the Glimmerglass Festival, the nation's second-largest summer opera festival in the nation, founded in 1975. What was once entirely opera in rotating repertory has grown to include musical theater, and this year's four-show season has both the classic "Showboat" (July 6-August 24) and "Blue" (July 14-August 22), a new work by Tony Award-winner Jeanine Tesori ("Fun Home") and Emmy Award-winner Tazewell Thompson ("Porgy and Bess"), which centers on a young black couple raising their first child in 21st-century America. Splurge on a night at the opulent The Otesaga Resort Hotel, and sip on a glass of wine in the row of rocking chairs looking out on Otsego Lake. Downtown, there's the National Baseball Hall of Fame and several good restaurants.

The furthest drive — and second-largest show offering, at 12 (Shaw Fest has 13) — is Stratford Festival, named for Shakespeare's home and known around the world for its exemplary Shakespearean productions. Stratford Festival was founded in 1953 by a local journalist seeking to revitalize the town's economy, and still holds that role. This year's season will include three Shakespearean works ("Othello," "The Merry Wives of Windsor," and "Henry VIII"); the new play "Birds of a Kind" (July 30-October 13) which will be performed with multiple languages and focuses on race and ethnicity issues; "The Front Page" (July 30-October 25), a newsy, comedic world premiere commissioned by Stratford and written by two Chicago journalists; and the family-friendly "The Neverending Story" (through November 3), which promises to be a spectacle of stage design. Behind-the-scenes tours are also offered through most of the season, and world class shopping and restaurants are just down the road in Toronto.