PHOTO BY ANDREW HARNIK Rudy Giuliani
Amidst pressure from faculty and alumni, St. John Fisher College's Board of Trustees is considering whether to rescind the honorary degree the school awarded to Rudy Giuliani.

In a statement Tuesday, the Board of Trustees said it planned to meet to discuss the matter, though it did not offer a specific date for when that would happen.

Current and retired faculty and alumni of St. John Fisher College have urged the school to revoke the degree bestowed upon Giuliani, President Donald Trump's personal attorney,  citing what they say was his role in the violent uprising at the Capitol last week.

“As documented in numerous news reports over the past several months, Mr. Giuliani has demonstrated an unwillingness to engage in rigorous and objective intellectual inquiry, a gross lack of professional integrity, and an extraordinary level of irresponsibility to the civic life and values of our nation,” read a petition that as of Tuesday morning had 206 signatures, including scores of current faculty members.

Their petition follows the trustees at Lehigh University in Pennsylvania and Wagner College on Staten Island voting to revoke honorary degrees those schools had previously given Trump, and a report that Middlebury College in Vermont was considering taking back an honorary degree it had given Giuliani.

The president of Middlebury, Laurie Pattron, has described Giuliani as “fomenting the violent uprising against our nation’s Capitol building on Jan. 6, 2021 — an insurrection against democracy itself.”

Giuliani has echoed the president’s baseless claims of fraud in the 2020 elections. His efforts culminated last Wednesday, when Giuiliani addressed a crowd of thousands of Trump supporters, seeming to urge people toward violence.

“If we’re wrong, we will be made fools of, but if we’re right a lot of them will go to jail,” Giuliani said. “Let’s have trial by combat.”

After hearing Giuliani and the president speak, much of the crowd marched to the Capitol and an angry mob ransacked the building. Five people were killed.

The degree has been controversial since it was bestowed on Giuliani when he was the school’s commencement speaker in 2015.

At the time, the move to grant Giuliani an honorary degree was opposed by much of the school’s faculty, including several department heads, who pointed to the incendiary and racially-charged rhetoric the former New York City mayor had been lobbing at then-President Barack Obama.

“His recent public arguments do not unite, inspire, or challenge us to be our very best community,” read a 2015 letter from Fisher faculty petitioning then-President Donald Bain to rescind an offer to Giuliani to address the graduating class and thus receive the honorary doctorate that is customary for commencement speakers. “Despite his past leadership record, in the last decade Mr. Giuliani has unfortunately shrunk to become a highly controversial, divisive ideologue.”

Ultimately, Giuliani delivered the commencement speech in May of that year.

Robert Mahar, a St. John Fisher alumnus who graduated in 1984, wrote the college's president, Gerard Rooney, over the weekend asking whether it was not time that the school cut ties with Giuliani. 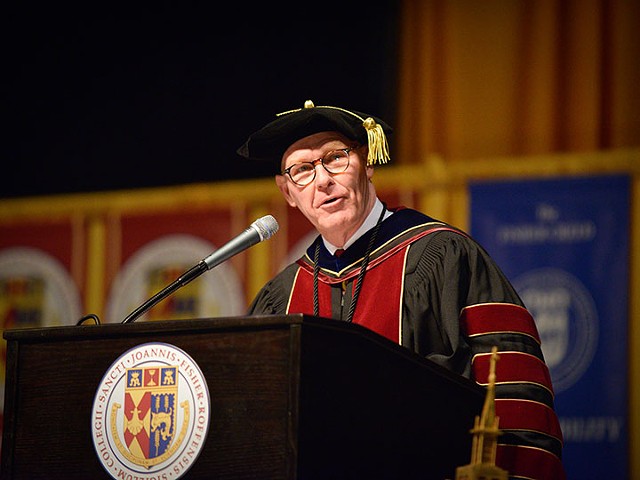 "Is Mr. Giuliani really the face of the Fisher Creed that you want to represent the college?" Mahar wrote.

St. John Fisher proclaims itself a liberal arts institution guided by its Catholic heritage, expressed in the motto of its Basilian Fathers founders, "Teach me goodness, discipline, and knowledge."

On Monday, the New York Bar Association announced it would open an “historic” inquiry into Giuliani that could lead to his expulsion from the organization. In a statement, the group argued that Giuliani had advocated for the overthrow of the United States government, a violation of the association’s by-laws.

“Mr. Giuliani’s words quite clearly were intended to encourage Trump supporters unhappy with the election’s outcome to take matters into their own hands,” the statement read. “Their subsequent attack on the Capitol was nothing short of an attempted coup, intended to prevent the peaceful transition of power.”

The association does not have the power to strip lawyers of their law license, but his removal from the group would run counter to a career that spanned 40 years and included a stint as the U.S. Attorney for the Southern District of New York, a high-profile post in which he led a federal prosecution of New York City mafia bosses in the 1980s.

Hours after the bar association’s announcement, the chairperson of the state Senate Judiciary Committee announced that he had made a formal request to the state court system to begin the process of disbarring Giuliani.

Giuliani reportedly addressed the complaints against him on his radio show.

“I was a prosecutor all my life — I'm not stupid,” he reportedly said. “I don’t want to get in trouble. And I have a high sense of ethics, personally. I hate it when people attack my integrity.”